The CW is doubling down on two of its most successful Canadian imports, ordering a third season of Coroner and a fourth season of Burden of Truth, TVLine has learned. Both series were already renewed in Canada, where they are currently in production.

[Season 3] returns with coroner Jenny Cooper moving past her trauma and embracing her whole self. In the process of healing, she and live-in boyfriend Liam are now separated, while Detective Donovan McAvoy faces his mortality in a new way. Ross stumbles his way through identity challenges, while Gordon hallucinates the possibility of a life once lived. In a series of touching, personal, and harrowing cases, this season addresses unorthodox therapy sessions, and uncomfortable, messy, and beautiful personal encounters. Jenny and those around her will come to truly understand what it means to be alive as they dance with death.

–
Burden of Truth stars Kristin Kreuk (Smallville) as Joanna Hanley, a corporate attorney who returns home to Millwood, Manitoba for a legal case that ultimately changes her life forever. Here’s what we can expect in Season 4, per The CW’s official synopsis:

When a mining company reopens a dormant mine outside Millwood, Joanna and Billy, lawyers and new parents, step in to protect a local woman’s home from certain destruction. When the mine swiftly retaliates, Joanna is forced to confront a long-buried secret from her past and scramble to protect the future of her career and her family. As both sides prepare for war with the fate of Millwood at stake, Joanna and Billy must juggle their life with a newborn with waging a legal battle against a corporate titan. 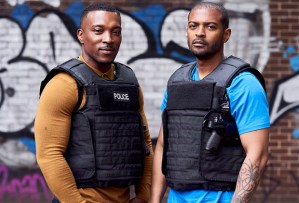 Additionally, The CW has acquired a special event from British import Bulletproof. The three-episode production was filmed earlier this year and will air sometime in 2021 in the U.K.

Per the network, this three-part event “will see London’s finest, Bishop and Pike delve into the criminal underbelly of Cape Town, South Africa. This tense, action-packed journey will take them from the lavish world of Cape Town’s elite, through the poverty-stricken townships, with danger around every corner. Bishop and Pike will learn that not everyone with a badge can be trusted.”

Are you pumped for new seasons of Coroner and Burden of Truth? Planning to check out the Bulletproof event? Whatever’s on your mind, drop it in a comment below.