The movie villains that inspired Monday’s Dancing With the Stars episode may be evil, but the performances weren’t bad at all.

ABC’s competition series celebrated Halloween with its latest outing, delivering 10 routines that featured iconic baddies from pop culture. (Cruella de Vil and Hannibal Lecter aren’t quite on the same level, but I get what they were going for.)

But for the remaining contestants, the real fright came at the end of the episode, when another couple was asked to pack up their dancing shoes and leave the ballroom for good. Before we get to the results, let’s recap the evening’s performances:

Jeannie Mai and pro Brandon Armstrong (Paso Doble inspired by Hannibal Lecter): Jeannie might just be the season’s most watchable performer, and I wish the judges were giving her props for that. She completely commits to all of her characters, and in this intense paso doble, that was especially valuable. On the technical side, my fear is that Jeannie is starting to plateau a bit; Carrie Ann’s recommendation that Jeannie suppress her energy just a tad is the same critique that Jeannie got back in Week 1, and her feet are still a bit wobbly when she’s in hold. But she’s got such potential to win the whole show, and I hope she can fine-tune some of those small details before it’s too late in the competition. Judges’ Score: 25/30

Johnny Weir and pro Britt Stewart (Viennese Waltz inspired by Dracula): Well, what we could actually see of this routine looked pretty solid, at least. (Someone in the effects department loves dry ice, huh?) I would argue, though, that parts of this Viennese waltz weren’t quite as fluid as the judges indicated. Although the costuming and “Creep” cover created a fantastic mood, Johnny seemed so caught up in the passion at times that his footwork was a bit choppy. (Plus, he came in way early on a hand connection toward the end.) It was a major improvement over last week’s salsa, but at this point, Johnny’s performances from week to week are more unpredictable than Carrie Ann’s hair color. Judges’ Score: 27/30 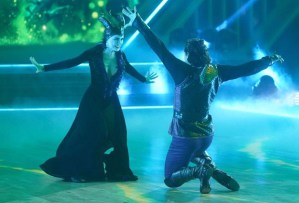 Chrishell Stause and pro Gleb Savchenko (Paso Doble inspired by Maleficent, pictured): Chrishell continues to show promise in the ballroom, and she seems to be taking the judges’ critiques to heart each week. As for whether this paso doble was “mesmerizing,” as Carrie Ann put it, I think that might be a bit too kind. It did have compelling dramatic elements, and Chrishell fully embodied Maleficent’s intensity — but Gleb’s choreography favored endless dips and drags across the floor instead of more traditional paso content, and Chrishell was sometimes so into her character, her movements looked unsteady instead of spirited. Judges’ Score: 26/30

Monica Aldama and pro Val Chmerkovskiy (Jazz inspired by Nurse Ratched): Perhaps it’s her cheerleading background, but no matter what facial expression Monica wears when she’s dancing, it rarely seems to reach her eyes. Her extensions in this number were fabulous, and there was a sensuality between her and Val that hasn’t shown up in previous routines, but Monica consistently struggles to sell the characters she’s playing, resulting in routines — like this one, unfortunately — that feel a little paint-by-number. (In an alternate universe, Rumer Willis and Val perform this same number on Season 20, and it’s fire.) Judges’ Score: 22/30

AJ McLean and pro Cheryl Burke (Tango inspired by Norman Bates): Perhaps it was lingering concern over Cheryl’s rehearsal injury — and the fear that it would happen a second time — but AJ’s expression looked a bit freaked out during this tango, no? Still, wide eyes aside, AJ deftly navigated some very complicated footwork here, and the song that accompanied his performance — the Intermezzo Orchestra’s “Psycho,” appropriately — was instrumental only, making AJ’s timing even more impressive. Judges’ Score: 26/30 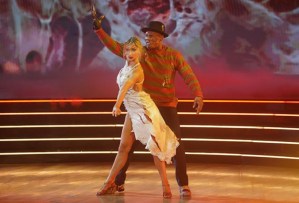 Nelly and pro Daniella Karagach (Argentine Tango inspired by Freddy Krueger, pictured): Watching Nelly’s self-consciousness melt away a little more each week has been one of the joys of this season, especially during this performance. Nelly has always had swagger, but his ability to be both menacing (as Freddy Krueger) and sultry (as a partner to Daniella) was terrific… even if not every Argentine tango step was perfect once that chorus hit. Judges’ Score: 27/30

Justina Machado and pro Sasha Farber (Tango inspired by Carrie): Sasha gets major kudos here for some very inventive choreography; working telekinesis into a dance routine is no easy feat, but he added some cool athleticism here to give the impression that Justina was really controlling his movements. In fact, once Justina and Sasha got into traditional tango hold, the number didn’t have quite as much impact, but the actress was, as usual, reliably solid. Judges’ Score: 26/30

Nev Schulman and pro Jenna Johnson (Paso Doble inspired by Black Swan): If you’ve followed any of my DWTS coverage over the years, you know I’ve got zero problem with ringers; it’s fun to watch the awkward, goofy performances for maybe two weeks, but after that, I’m ready to see real dancing — and that’s absolutely what Nev delivered here. Across the board, this paso doble was gorgeous: athletic but graceful, fierce but elegant. (And Jenna can rock black lipstick in a way I will forever envy.) It does make me laugh, though, that all of Nev’s pre-taped packages end up revealing that he’s been dancing, or at least watching dance performances, for years. The show tried to pretend at first like Nev wasn’t practically a pro dancer himself, but he very much is. Whatever! I love perfect dances! Judges’ Score: 30/30

Skai Jackson and pro Alan Bersten (Argentine Tango inspired by Bride of Chucky): What a difference a pair of Tiffany Valentine color contacts makes! Skai’s most consistent shortcoming this season has been her nervous smile, but the angsty vibe of this performance — from the hair and makeup to the Billie Eilish soundtrack to the moody choreography — allowed for Skai’s anxiety to fade away beautifully. But if you’re going to dance to a Billie Eilish song on Villains Night, how is it not “Bad Guy”? Judges’ Score: 27/30

Kaitlyn Bristowe and pro Artem Chigvintsev (Paso Doble inspired by Cruella de Vil): First off, saddling Kaitlyn and Artem with that dreadful “Disturbia” cover was so rude. Second, Kaitlyn admitted this paso doble exhausted her, and you could tell her energy was flagging by the end; when she sat on the floor in preparation for Artem to pull her through his legs, it honestly looked like she had no interest in getting up. On one hand, the exhaustion Is understandable, as her routine was packed with more content than any of the episode’s other paso dobles; on the other hand, expectations for Kaitlyn are sky-high, and her performances are becoming a smidge forgettable. (Just a smidge, though!) Judges’ Score: 24/30

Now it’s your turn! Did Monica and Val deserve to go home this week? Give us your thoughts on Villains Night in a comment below!