Warning: The following contains spoilers for Sunday’s Fear the Walking Dead. If you haven’t watched yet, you might want to look the other way.

As bait-and-switches go, the one that Fear the Walking Dead pulled in Sunday’s “Alaska” was a goodun. Throughout the episode, we were led to believe that we were racing toward a reunion between Al and Isabelle. Instead, we got a reunion between Dwight and Sherry. How’d that happen? Read on…

‘I FEEL LIKE I’VE BEEN 16 SOMEBODIES SINCE IT ALL ENDED’ | As the hour began, Morgan stunned Rachel with a plenitude of supplies — including… was that jam? Syrup? Anyway, she seemed to know that it was from the plant of ill repute and reacted accordingly, prompting Morgan to assure her that his man on the inside didn’t know where they were and wouldn’t until it was time to get all of his friends out. If only he could be sure, he mused as he whittled himself a new stick and attached Emile’s axe blade to it, that his nearest and dearest would recognize the person he was becoming by the time he reached them. Poor Morgan: another day, another existential crisis.

Elsewhere, Al and Dwight searched a funeral home at Ginny’s behest. Apparently, this was their new regular gig: checking out places, seeing how many dead were around and figuring out why they were dead. It wasn’t glamorous, but they got to be on their own and even had some fun with a variation of the license-plate game that kids play on road trips, only their goal was to snag from walkers driver’s licenses from all 50 states. After, as you’d expect, they ran afoul of a few of the undead, including one zombie that looked to have been embalmed, they took a break to sample some nasty, turnt brewskis Dwight had found. “Thinking about Beer Lady?” he asked. Al didn’t want to talk about Isabelle. Heck, she wouldn’t even tell Dwight Beer Lady’s name. He tried to get her to open up by mentioning Honey and how “Sherry always said bad beer went better with pretzels.” But nope. Al’s lips were sealed — that is, until Dwight overheard Beer Lady on her walkie-talking discussing her imminent arrival at a drop site. We’ve gotta go there, Dwight insisted. If Al and Isabelle wanted to run away together, he’d dress up a recently-turned walker to make Ginny believe that his pal had bought the farm. When Al said he sounded crazy, he reminded her that “you’re talking to a guy who walked halfway across the country because his wife wrote him a note.” Aw, Dwight, you ol’ softy! 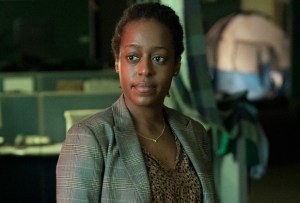 ‘THE LAST TIME I FELT ALIVE WAS WITH HER’ | Once Dwight and Al arrived at the building on which Isabelle was going to land, they discovered in the lobby a walker being nibbled by a rat — a walker from Alaska! “Tell me that’s not a good omen,” said Dwight. In the stairwell, they found… strange. Cages full of rats and “The End Is the Beginning” spray-painted on the wall. (Oo, Episode 1 throwback.) By and by, our heroes came across a couple of strangers, Lee and Nora, who warned them against going to the helipad. Nora’s friend Mark had done just that — and the people in the chopper had shot him. Wait, had Beer Lady shot Alaska? asked Dwight, only now realizing that there was a lot more to Beer Lady than he’d guessed. After Al and Dwight explained to Lee and Nora that they were videotaping everything to help keep what was happening from happening to people to whom it hadn’t happened yet — got all that? — the newcomers ushered them into an office full of people who were stricken with bubonic plague. Aw, rats!

Though Dwight wanted to do right by the sick, Al insisted that she’d seen the plague in the field — it was too late, and no way was Ginny going to help these people. So Al locked them in and kept making her way to the roof. She was that determined to feel once more the way that she had with Isabelle, “even if that means taking the risk that it’s just for a moment.” Walkers being a grave impediment on the friends’ climb, Al eventually decided to follow the rats — by tearing through a plaster wall and climbing up some pipes. As she and Dwight crawled through a passageway filled with vermin, she noticed that her companion had a telltale mark on his neck. Shucks, that wasn’t her fault, he insisted. He could’ve been infected by the rat he’d found in his sleeping bag days ago. (Now you know you’ve got a good friend when he’s like, “C’mon, it’s not your fault I have bubonic plague!”) 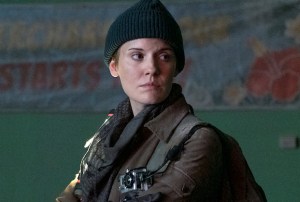 ‘YOU’RE A LOT BRAVER THAN I AM… OR MAYBE JUST STUPID’ | By and by, the pair became trapped by walkers in a bathroom. Nora not only came to their rescue, she showed them the way to the access point to the roof — she’d worked in the building and had been there since the world was turned upside-down. After they cleared an office full of walkers infected with the plague, Nora needed a minute. She recognized one of them — well, as best one could, in his deteriorated condition — and asked Al to stop recording. “No one should remember them like this,” she said, tearing up. In response, Al gave her Mark’s driver’s license. As Nora and Dwight left Al to ascend to the roof, he told her that he’d left her a message on her tape. When she watched it, she found that he’d asked her to “crack one open for me, please [with Beer Lady] — and don’t forget the pretzels.”

As the chopper neared, Al shot a flare and walkie-talkie’d for Isabelle to reverse course. Who is this? asked Isabelle. “Just someone who wants to help you out,” replied Al, taking care to be discreet. “This place is filled with the dead. They’re infected with the plague.” What about Al? “Maybe,” she admitted. As Isabelle changed course, she told Al that there’s some beer in the supply crates. “Hope it’s not your last,” she added. Unable to just let Isabelle go without opening her heart at least a smidgen, Al told her that “I just want to say… it is good to hear your voice, ’cause there aren’t many people left.” OK, these two are the best couple since John and June. To her delight, Al found tons of Cipro with the beer — she could save Dwight and all of Nora’s friends, too. When Dwight asked why the chopper had turned away, Al replied that “I lost a brother once. Tapes were all I had left. I guess I didn’t want that to happen again.” Before they took off, Al advised Nora not to go where she and Dwight were from — they’d find her crew someplace better. 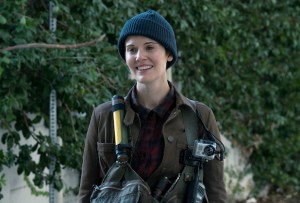 ‘HONEY, IS THAT YOU?’ | As the episode drew to a close, Al deduced that the rats, the plague… none of it was an accident. Who did it, though? Whoever had spray-painted their message in the lobby, she reckoned. When they went to call the Rangers, lest anyone get suspicious about their whereabouts, they instead heard a worried voice on the walkie-talkie. Someone had seen the flare and was offering help and… and it was Sherry. Next thing we knew, she and Dwight were tearfully reuniting in arguably one of the most moving moments in the series’ history. Wouldn’t you agree? Drop your thoughts on Al and Isabelle’s near-miss, as well as Dwight’s reunion with his Honey, in the comments below.