Eight years ago this week, long before he “spacesuited up” as The Right Stuff‘s Gordo Cooper, Colin O’Donoghue made his debut as Once Upon a Time‘s Captain Hook. But before he did, he nearly got a helping “hand” from Dustin Hoffman‘s own, big-screen take on Peter Pan’s pirate nemesis.

Reminded by TVLine of his Once-iversay during a recent interview, O’Donoghue shared, “One of the things that stands out from early on was that I actually tried to use the hook from Dustin Hoffman’s movie [with Robin Williams]. We were considering using that hook, but the one that he actually wore is massive, because his costume and everything was so flamboyant and so big.”

The ABC series’ take on the iconic Disney villain, meanwhile, was aiming more for “black leather and an open blouse,” the Irish actor recalled with a laugh. 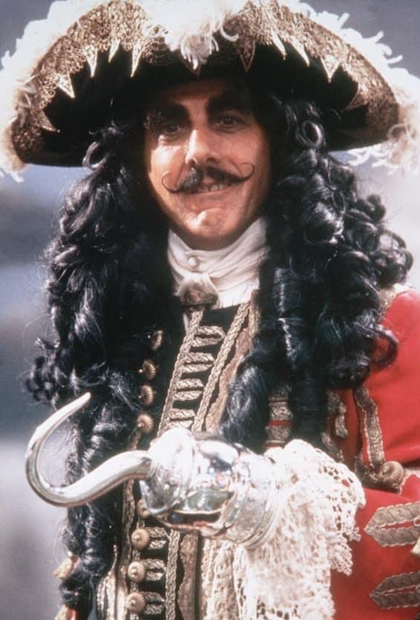 Once Upon a Time‘s Hook also sported a, um, more dramatic eye. “I hadn’t realized there was going to be that much [‘guyliner’], and that it was going to become such a thing,” O’Donoghue said. “I think people are very disappointed when they meet me or see pictures of me without any eyeliner on now. In [Disney+’s] The Right Stuff, I don’t have a beard and I’ve got like a 12-year-old boy haircut, so I think I look pretty different!”

OUAT promoted O’Donoghue from recurring to series regular even before Hook first swashbuckled into Miss Emma Swan’s life. And from that moment on, they formed one of the series’ core couples — that is, once the show’s steely heroine (and viewers) warmed up to the pirate’s rascally ways.

“I had a very specific idea as to how I would play him, and [showrunners] Eddie [Kitsis] and Adam [Horowitz] were on the same page from the get-go,” O’Donoghue said. “I just made an innuendo about anything that I could — that was part and parcel of what he was — but I knew I could do it in a cheeky way so that you could kind of get away with it.

O’Donoghue was with OUAT from Season 2 through to the very end, trading vows with Emma in Season 6’s musical/wedding episode and then sticking around for the Season 7 “requel” (even though leading lady Jennifer Morrison had ended her run as a series regular). For that farewell season, O’Donoghue got to play the Wish Realm’s Captain Hook (fleeting paunch and all) as well as the amnesic Seattle police detective version of same.

All told, Hook “was such a big character — and big part of my life for a long time,” said his portrayer. (With reporting by Vlada Gelman)

Disney+’s The Right Stuff releases a new episode every Friday.