THE SHOW | HBO’s The Third Day

THE PERFORMANCE | Given how this odd little series’ previous episode ended — with Helen spotting AWOL Sam on the dock in Osea — you could have understandably expected either A) an emotional reunion or B) a marital blowout, given that Helen had just learned that the isle’s newest resident had been sired by her husband.

But what actually unfolded was unexpected. And layered. And dark. And that gave Harris such interesting notes to play. Because make no mistake, it was not “happy to see me” between the two. Hardly. But before they could even delve into their muddled marriage, Sam dropped the bombshell that their dearly departed son was in fact alive and residing in the Big House just over yonder.

Again, you thought you knew where this was going: Mother and son are most unexpectedly reunited, cue the waterworks! But after laying eyes on the child, Helen pointed out to Sam — and to us — that the lad is not Nathan, partly because he’s too young/nowhere near 16, but also because his skin is the wrong color! And just like that, Harris bowled us over with the blanks of information we never realized hadn’t quite been filled.

This is also where Harris sank her teeth into the tensions, old and new, between wife and estranged (and let’s just say it, strange) husband. She spat out unflattering facts, including that Sam had been on the phone for more than 20 minutes, with a mistress, at the time Nathan went missing. Also, it was none other than Helen’s father whom Sam had accused of stealing the 40,000 pounds!

Speaking of the loot, Helen made clear that that was the only reason she came to Osea — not to kick back at a squirrelly Airbnb, nor to save her marriage, but to reclaim the sizable stash, so as to bankroll their daughters’ future.

From there, Harris got to bounce some more off of the locals — including Emily Watson’s mercurial Mrs. Martin and Katherine Waterston’s discomfitingly batty Jess — and even get tied up for a bit, before making a last, valiant run for it. The causeway was not open, but this mama bear would not be deterred, trying a dingy to her waist and tirelessly (and more than a bit miraculously) towing Ellie and Tellulah across the river, come hell or icy cold water.

HONORABLE MENTION | Fargo is, if nothing else, a treasure trove of adorably odd character names, and Glynn Turman‘s Doctor Senator has been a bright spot in Season 4, acting as Loy Cannon’s level-headed advisor. The veteran actor (who you may remember from A Different World as hard-nosed professor Colonel Bradford Taylor) brings a wise, regal air to Doctor Senator, who flexes his intellect as he launches into monologues about the ways of the world. This week, Senator faced off against a pair of violent Italian mobsters, but Turman’s face didn’t betray even a flicker of fear as Senator calmly pointed out their logical fallacies and referred to the pair as “just boys makin’ a mess that one day I’m gonna have to clean up.” Senator didn’t survive his run-in with the Italians, alas, and he even seemed to know his number was up — but the legacy of Turman’s precisely calibrated turn will linger over the rest of this season, we’re betting.

HONORABLE MENTION | The ongoing coronavirus pandemic has very few positive aspects, but one showed up Wednesday night in black-ish‘s Season 7 premiere: Tracee Ellis Ross‘ moving monologue as Bow broke down just a little while admonishing Junior about not being serious enough about the virus. As a doctor, Bow is the only Johnson actively on the front lines of fighting the disease, and Ross filled her character’s voice with a potent mix of anger and tears as she confessed how scared and powerless she felt in the face of such an overwhelming illness. Ross, so gifted at comedy, rarely gets a chance to show off her dramatic chops. And while we don’t want more heartache for Bow, we’d love more opportunities like this for such a talented actress. 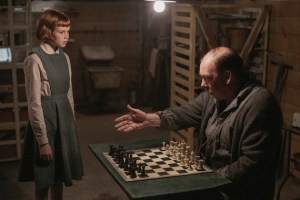 HONORABLE MENTION | if Netflix’s The Queen’s Gambit were itself a chess match, the introduction of Mr. Shaibel represents its opening move — and it is a subtle yet impactful one. Played by Bill Camp, the orphanage’s janitor is neither colorful nor genial; he’s just there, tinkering in the cellar where young Beth is sent to clap erasers. Like the iconic Mr. Miyagi, he doesn’t jump at the chance to school an odd kid, here in the complicated game of chess. But when Beth presses on with her interest and demonstrates a remarkable aptitude, Camp deftly shifts Shaibel’s gear from indifferent to curious, and ultimately gobsmacked — though never gushing with praise. Instead, he gives the prodigy what she rightly merits: a quiet but undeniable reverence.