Colin O’Donoghue‘s first major series gig after wrapping Once Upon a Time couldn’t be more different than the roguish pirate Captain Hook that he brought to life for six seasons.

Going from the fairytale character to taking on The Right Stuff‘s Gordon “Gordo” Cooper was an “opportunity to play somebody who was a real person and was a test pilot and then went on to be an astronaut,” O’Donoghue enthuses to TVLine, “and he’s got quite some clout. Just the idea of getting to play somebody like that was a dream for me.”

Below, the actor talks about shedding his accent to portray Gordo and his character’s “complicated” marriage to wife Trudy (Chicago Fire‘s Eloise Mumford), which is tested by a woman from his past in this Friday’s episode of the Disney+ drama. O’Donoghue also reveals his next dream role (hint: it’s Star Wars-related).

TVLINE | What excited you about this particular project and playing an astronaut?
I had a meeting with [executive producers] Jennifer Davisson and Michael Hampton, actually, years ago. I think it’s three or four years ago now. I was doing a show called Once Upon a Time at the time, and they gave me the book The Right Stuff. It hadn’t been developed or anything at that point, but I read the book, and I remember thinking, “Right, well, this is something that I’d really want to pursue if I was no longer doing Once Upon a Time,” and then I got the script for The Right Stuff. I think it’s the best pilot script I’ve ever read. So I was desperate to play the part. The way it transpired was I knew somebody else had been offered the role, and they had to pull out, unfortunately for them. So it was all very last-minute, me coming in, doing it, but it felt almost serendipitous. 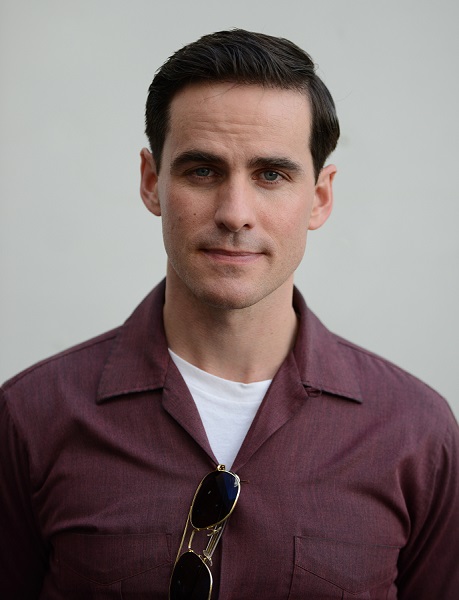 TVLINE | I did watch Once Upon a Time, so when I queued up The Right Stuff, I was thrown for a second. I was like, “Wait, is this really Colin?!”
[Laughs]

TVLINE | How difficult was it to master the accent?
I kind of got it pretty quickly. Howard [Samuelsohn], the sort of voice coach/acting coach, was excellent. But I had very little time to prepare. I had maybe three or four days before I started shooting. Luckily, I had played a Southern character not long before that in kind of a Western Dolly Parton thing that I’d done. I knew how to do the accent. Gordo was from Oklahoma, and he had a very specific way of speaking. I did a mixture of sort of the two… I just love doing accents, full stop, anyway. I find it very difficult to act in my own voice.

TVLINE | I saw that episode of Dolly Parton’s Heartstrings. That was a really good episode.
Yeah, it was a lot of fun. I mean, how can you say no to Dolly Parton? She’s an incredible woman.

TVLINE | I feel like you’ve now gotten to live out all the typical American young boy fantasies. You’ve gotten to play a cowboy and an astronaut.
I know, yeah, a cowboy, pirate, and an astronaut and a test pilot. So the only thing that’s left, I guess, is to be a Jedi.

TVLINE | There’s always The Mandalorian. You are in the Disney family.
Yeah. I have two shows on Disney+ now [The Right Stuff and Once Upon a Time], so why not a third, you know?

TVLINE | I mean crazier things have happened this year, so I definitely think you have a good shot of becoming a Jedi.
[Laughs] Fingers crossed. 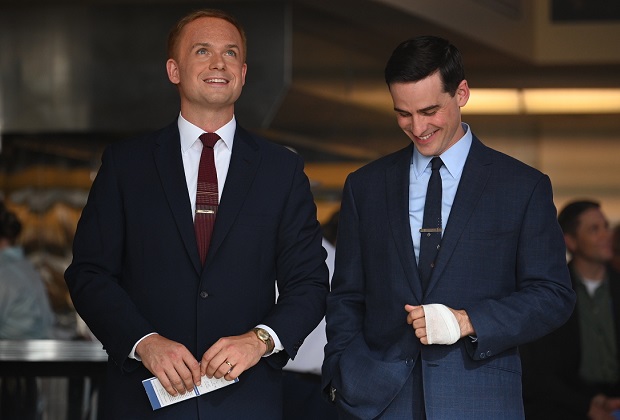 TVLINE | I want to talk about the relationship between Gordo and John Glenn (Suits‘ Patrick J. Adams), because they have a very kind of different bond than I think Glenn has with any of the other astronauts on Mercury Seven. How would you describe their dynamic?
I think, in reality, John Glenn was the most decorated of the pilots, and everybody knew who he was, and I think Gordo has just a massive respect. What was amazing about these seven guys is that they all firmly believed that they were the best pilots. As individuals, they were the best one, and that’s a test pilot sort of mentality from the get-go… When you think about what they were doing as test pilots was nobody had ever sat in the airplane, and they had to try and push them harder and faster and more than anybody could ever imagine to see where the breaking point was. And so you would have to believe that you were the best to be able to do that, to believe that you could, in some way, control whatever was going to happen. Because Gordo was the youngest of the seven, [John] sees a young pilot who has a lot of talent, and for Gordo, he just sees this legend and somebody who has faith. John Glenn didn’t drink, he didn’t smoke, and I think that he was just somebody that Gordo really looked up to.

TVLINE | Does Gordo find himself playing the mediator role, because he’s sort of got his foot in both worlds? He’s both John Glenn’s friend, and he’s socializing with the other guys.
Yeah, I think he does sort of straddle both. He tries quite hard to get John to be involved. In some ways, John sort of stood alone on his own, maybe, and I think Gordo was trying to bring him in and make him part of the team, as opposed to being the leader. 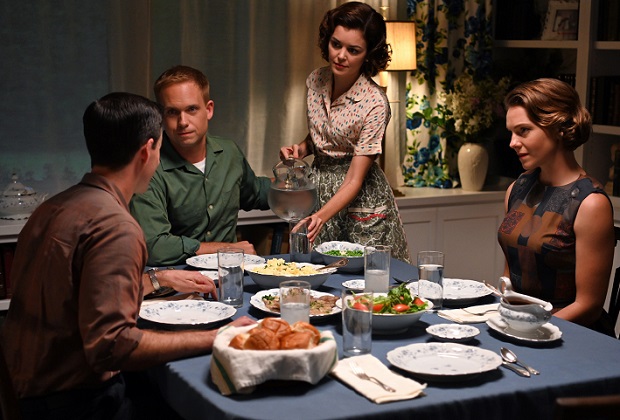 TVLINE | Gordo’s marriage to Trudy is also somewhat different compared to the other astronauts’ marriages in that his wife is also a pilot, and he’s very supportive of that. When he’s telling the story of how they met, it’s clear that he’s attracted to her because of that.
It was a very complicated sort of situation, because when Gordo joined and put himself forward to become an astronaut, they were separated, and even as a test pilot, that was frowned upon. Look, you could go drink a bottle of Jack Daniels and sit behind the cockpit and fly, but if you were separated, that was frowned upon. It was a weird time, and he knew that he would be bounced out of the program if they found out that they were separated. So they essentially lived a lie. I think he loved Trudy, and certainly our version of Gordo, very much, does love her… The reality of it is that they are separated, and it doesn’t matter how much he says or talks about how much he loved her or how beautiful she was with the sun setting behind her. It’s just complicated, and they were living a lie for the whole time he was in the NASA space program.

TVLINE | There’s a moment, I think it was Episode 3, where Gordo is tempted to stray and cheat. Did he just get lucky that they were interrupted in that moment? Or do you consider him a faithful man?
[Laughs] That’s the million-dollar question. That’s the whole point of that. In reality, I think pretty much all of the guys, except for John Glenn, were sort of playing away from home, and they were all heavy, heavy drinkers. It was a different time. I think the version we have in this Gordo is trying to make his marriage work. He does want it to work. But I think he gets tempted in that moment. Whether or not he would’ve followed through, that’s sort of left hanging in the air, and some people on the crew believe that he was definitely going to go for it, and others don’t. Others think that he would’ve pulled back at the last minute. 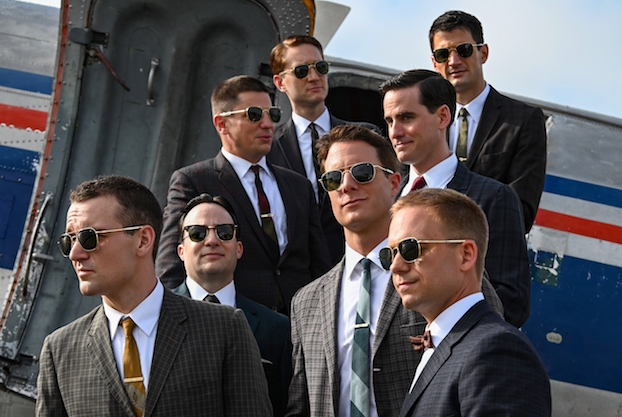 TVLINE | I’m going to exaggerate here, but I feel like there’s an actor in this series from almost every show that TVLine covers or has covered or that our readers love.
[Laughs]

TVLINE | What was the experience like of filming with all these guys, as you were also depicting a brotherhood of sorts onscreen?
Genuinely, it became that. We became incredibly close as an entire cast and not just the seven astronauts. We became a very, very tight-knit group, and it was an absolute joy and pleasure to be a part of that. Everybody is so incredibly good in the show. You can’t help but learn from working with people. We all really connected, and a lot of that started from before I came on. Patrick Adams had set up, I think, a WhatsApp group and an email chain so that people could share whatever sort of information they found on Mercury Seven or their characters. It sort of went from there. Because we were all in Orlando, and none of us, obviously, were from there, we were arranging to go for dinners or whatever meet-up, and so we just became like a family.