“See ya later, sweatpants!” said Kelly Clarkson at the start of Season 19 of The Voice. And bless its heart, the return of the NBC sing-off Monday provided a much-needed dose of what we vaguely remembered as normal. Sure, there were nods to the precautions that the competition was taking to ensure the safety of its contestants and coaching panel — which found Nick Jonas’ seat next to Kelly Clarkson, John Legend and Blake Shelton once again being filled by Shelton’s honey, Gwen Stefani. But for the most part, the show was business as usual. And it was, in a word, delightful. Read on, and we’ll review not only the first of the Blind Auditions, we’ll reveal which contestant inspired Clarkson to react in the manner pictured above. See? You’re having fun already. Good season, bad season… it almost doesn’t matter, we’re all in! Let’s make with the recap! 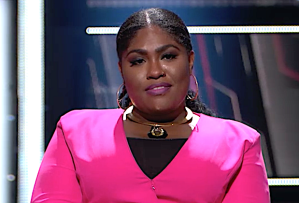 Tamara Jade (Team Legend), “Cuz I Love You” — Grade: A | This 30-year-old ray of sunshine hadn’t even gotten done with the first note of her Lizzo cover before Kelly swiveled her chair — and for once, I didn’t think it was just because she recognized the song. Tamara, a pro who’s actually sung backup for Lizzo at the VMAs, turned out the kind of rich, full-throated performance that the show usually saves for the end of an episode. (Watch below.) “You’re gonna be in the finale,” Kelly told the four-chair turner. If only I didn’t fear the same fate awaited Tamara that did Kyla Jade, Rose Short, Toneisha Harris…

Lauren Frihauf (Team Gwen), “Come to My Window” — Grade: C+ | A native of “the middle of nowhere,” Colorado, this wide-eyed 16-year-old definitely left it all on the stage. But, maybe owing to nerves, she was shaky here and there and seemed to yell the lyrics more than even this passionate Melissa Etheridge number called for her to. (I love me a raspy rocker; this was just a little bit “volume at 11” throughout.) Only John and Gwen turned their chairs for Lauren, which was a mini-bummer, ’cause she could’ve probably learned a lot from Kelly’s ability to add nuance to a rock song.

Joseph Soul (Team Kelly), “Is This Love?” — Grade: C | After overcoming a case of “mask beard” (the pandemic’s answer to hat hair), this Hawaiian DJ took to the stage to deliver a soulful, smooth-as-coconut-milk rendition of Bob Marley’s classic. And it was really lovely, so I feel bad about giving Joseph a “C.” Trouble is, for the most part, his performance came off very karaoke, almost insincere — which is odd, because he seemed like the sweetest, most genuine fella. I wanted to love it, I just… didn’t.

Ian Flanigan (Team Blake), “Colder Weather” — Grade: B | A New Yorker who spent the better part of the last year gigging around the US with his family in an RV, this 30-year-old — who kinda looks like Blake, no? — parted his lips to sing, and out spilled open road. How Blake didn’t turn his chair immediately, I can’t fathom. Ian immediately demonstrated a spectacularly rich, lived-in vocal that was so country, his coach heard in it a long beard, a 10-gallon hat, a beer gut and a history of gargling with glass. Anyhow, though it took Ian a minute to win over Blake, those two are a match made in Voice heaven. 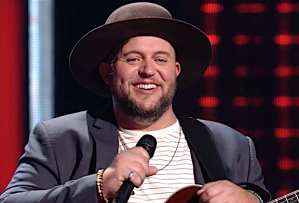 Jim Ranger (Team Blake), “Blue Ain’t Your Color” — Grade: A- | This third-generation pastor explained in his pre-interview that his wife is the daughter of his mom’s best friend, so they had, as he called it, “a very redneck version of an arranged marriage.” His choice of Keith Urban to cover shoulda made him a no-brainer for Blake, but Jim actually sang at first with more soul than grit. So his eventual coach only joined Gwen and John in their chair-swinging when Jim really let loose and kicked some rasp. Even after John’s “campaign ad” branding self-professed liar Blake a liar, Jim couldn’t resist choosing him to be his coach.

Eli Zamora (Team Kelly), “Yo Lo Se Que Tu Te Vas” — Grade: A | The minute I heard that this charismatic Texan (who works as a singing gondolier in Vegas) was doing a song in Spanish, I pictured Kelly’s chair turning; if I recall correctly, she loves bilingual artists. But damn, that was not the only reason she shoulda turned. From the start, he was so freaking poised, a man possessed. And as his Juan Gabriel cover allowed him to go bigger, he rose to the occasion, opening up his vocal to the point that I had to pick my jaw up off the keyboard on which I was typing the recap. I repeat: Damn. “I’m like fighting tears,” Kelly said afterwards. Happy ones, no doubt. 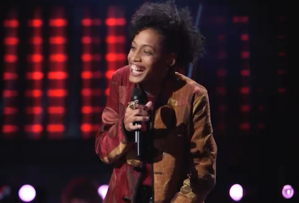 Payge Turner (Team Gwen), “Call Out My Name” — Grade: B+ | Presented to us at first as a truly blind audition, this 27-year-old native of Trinidad and Tobago served up a rendition of The Weeknd that was so sublimely smoky, it made me feel like I was hanging at a bar on the wrong side of the tracks way past my bedtime — which I mean as the biggest of compliments. I might’ve liked to have heard a little bit more range from her — that amazing low note notwithstanding — but Payge owned the stage and not for a millisecond faltered. Clearly, she’s destined to be my heartbreak of Season 19 — the contestant I get too enthusiastic about who ends up being eliminated way too soon.

Marisa Corvo (Team Kelly), “Perfect” — Grade: A | After an intro package in which this thirtysomething “from a very big, over-the-top Italian household” on Staten Island revealed that her parents had been so appalled to learn that she was a lesbian, they’d tried to have her religiously straightened out, she covered Pink with a power and precision that was downright Gaga-esque (but didn’t inspire a chair turn from hard-to-get John). “You have range for days,” Kelly exclaimed afterward. Blake likened himself to the ripe tomato that Marisa needed to make the perfect pasta sauce — or something like that? — but she still went with Kelly. Smart. 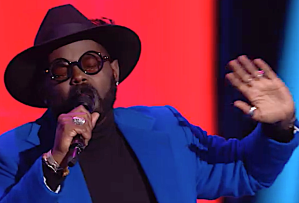 John Holiday (Team Legend), “Misty” — Grade: A+ | Ho. Ly. Crap. Another contestant presented to us initially as a truly blind audition, this gay Texas opera singer sounded from the get-go like… like an old Etta James record you’d play before a roaring fire while discovering what cognac tastes like. John (Legend, that is) turned immediately, that was how stunning the audition was. He even went so far as to block Kelly, whose GIF-ready reaction to the vocalist’s gender is pictured at the top of this recap. John’s — Holiday’s, not Legend’s — performance was stunning, and not just because he had the coaches convinced that they were listening to a female vocalist. It was gorgeous — emotional and album-mix perfect. Thankfully, Blake was right, and even pets knew who John would (wisely) choose as his coach.

So, off we go! Did anybody else think no-chair turner Hailey Green was better than Lauren? What did you think of the premiere overall? Grade it below, then vote for the artist you felt gave Monday’s best Blind Audition.