Dancing With the Stars seemed to have just one thing on its mind Monday night: Derek! Hough! Was! Back!

In case you somehow missed the three weeks of teasers from Tyra Banks, judge Derek Hough — who started his DWTS career as a professional partner years ago — returned to the ballroom floor this week to perform a paso doble with girlfriend (and onetime DWTS troupe member) Hayley Erbert. Forget about those Top 11 contestants! Derek’s dancing again, and nothing else matters! (Derek’s performance was very good, but it was clearly pre-taped, no?)

But even though the remaining Season 29 amateurs didn’t inspire quite as much hype as Derek’s return, many of them made a strong case for advancing to the Top 10. Others, however, seemed to regress a bit, including a contestant who topped the leaderboard just last week. Before we get to the results, let’s recap the evening’s performances:

Johnny Weir and pro Britt Stewart (Salsa): One of the great mysteries of Season 29 is Johnny’s continuous struggle with traditional ballroom styles. Last week’s contemporary was tremendous, but so much of this salsa was off — awkward hand connections, a final lift that looked a little painful to execute and, most disappointingly, Johnny’s tendency to dance just a liiittle ahead of the music. He has one of the best personalities on the show, and his chemistry with Britt is so, so good, but I can’t help but wonder how many more chances he’ll have to prove he’s a consistent performer. Judges’ Score: 22/30

Nev Schulman and pro Jenna Johnson (Jazz): Whomever paired Marky Mark and the Funky Bunch’s “Good Vibrations” with the style of jazz, frankly, has a sick and twisted mind. (It’ll come in handy for next week’s Halloween show, at least!) But Nev, once again, was reliably good, and he didn’t miss a step in this intricate performance. Judges’ Score: 26/30

Monica Aldama and pro Val Chmerkovskiy (Rumba): Despite the glowing remarks from the judges — including Bruno’s comment that Monica’s face was “inspired” during Monday’s routine — I feel as though she’s struggling with the same problem that several gymnasts have had on this show: She’s got all the steps down, but the emotional connection just ain’t there. The rumba is meant to be passionate and seductive, and though it’s hard to accomplish that with Rod Stewart’s “Have I Told You Lately” as your soundtrack, I so wish Monica had brought a little sensuality to her dynamic with Val, who was doing most of the heavy lifting here when it came to emotional intensity. (Great hip action, though!). Judges’ Score: 27/30

Skai Jackson and pro Alan Bersten (Cha-Cha): Man, this was a heartbreaker, huh? I had hoped Skai’s transcendent foxtrot from two weeks ago would be a turning point for her, but she continues to radiate nervous energy when she enters the ballroom, more than a month into the season. And then, of course, there was that middle section, in which Skai completely lost the choreography for a few seconds. She recovered nicely, and the second half of the number was surprisingly strong given her early mistakes… but Skai’s now had two big fumbles during her performances, and I worry she’s not getting any more comfortable on the dance floor as the season continues. Judges’ Score: 18/30

Vernon Davis and pro Peta Murgatroyd (Cha-Cha): Vernon, fortunately, did not seem rattled by Skai’s cha-cha, which came immediately before his and featured quite a few missteps. But even though Vernon has this magnificent energy and commitment to the movements — dude is not afraid to pop the booty out, folks — there’s been something tragically forgettable about his recent performances, and I fear he’s forever stuck in the land of sevens. Judges’ Score: 21/30

Nelly and pro Daniella Karagach (Viennese Waltz): Nelly knew we wanted rounded arms, and he gave us rounded arms in this Viennese waltz. I do wish he had a slightly stronger chemistry with Daniella, who’s working incredibly hard to soften his edges and choreograph to his strengths — but on the whole, Nelly’s elegance (his Nellygance, if you will) and vulnerability in this routine were such a pleasant surprise, given his previous hesitance to completely surrender to the choreography. Judges’ Score: 24/30 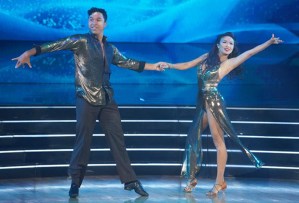 Jeannie Mai and pro Brandon Armstrong (Rumba, pictured): What Monica’s rumba lacked in emotional connection, Jeannie’s had in spades. Moved to tears by her family members who had risked everything to flee Vietnam, Jeannie began this routine with quivering lips and glassy eyes — but even after she got her emotions under control, Jeannie maintained that intensity and sensitivity until the number was finished, and she brought sensuality to the movements despite performing on the verge of tears. Impressive all around. Judges’ Score: 25/30

AJ McLean and pro Cheryl Burke (Samba): This. Was. So. Fun. Some of this season’s male contestants seem a bit too restrained and self-conscious when they perform, but AJ completely goes for it, sinking into the pocket of this samba perfectly. And those shoulder shimmies? Everything. Judges’ Score: 27/30

Chrishell Stause and pro Gleb Savchenko (Contemporary): I was a little nervous for Chrishell to tackle a style as demanding as contemporary, but I think she actually benefited from a style that’s more abstract and emotion-based. Sure, it wasn’t technically perfect — and I’d argue that Gleb could have given Chrishell meatier choreography, instead of packing the piece with lifts — but the dedication to Chrishell’s late parents made the entire number pulse with emotion, which is especially important for this style. Judges’ Score: 24/30

Kaitlyn Bristowe and pro Artem Chigvintsev (Samba): I got a chuckle out of Kaitlyn’s pre-performance video package, which tried its darndest to convince us Kaitlyn was struggling with the choreography. We all knew she was going to slay in the end, right? Carrie Ann had a point, though, that this samba managed to be both technically superb and a little underwhelming; the bar for Kaitlyn is especially high, given her consistent excellence, and she’s got the unenviable task of outdoing herself every time. Judges’ Score: 27/30

Justina Machado and pro Sasha Farber (Viennese Waltz): It was graceful, it was sensitive and that foot did not come off the floor. Justina is another contestant who’s been so dependably good every week that she runs the risk of falling through the cracks with voters. But as worried as I am that Justina will go home sooner than she deserves because she’s too good — there’s precedent! — it was lovely to see a more emotional side of her, and her connection with Sasha is among the season’s most joyous. Judges’ Score: 27/30

Your turn! Were Vernon and Peta the right choice for elimination? And who’s your current favorite in the Top 10? Tell us in a comment below!