On this Friday’s episode of Disney+’s The Right Stuff, the Mercury Seven astronauts are put through a gimbal rig training exercise that makes the wildest rollercoaster in the world look like a stroll through the park. The device is designed to simulate an aircraft spinning out of control, and the series’ stars were actually strapped into it in a real test of whether they could keep their stomachs in check.

“Luckily, I didn’t lose my breakfast or anything,” Jake McDorman, who plays Alan Shepard, says. “But it was a lot harder than I anticipated. I think the last time I was in anything remotely close to that would’ve been like when I was on a rollercoaster when I was a lot younger. So you’re like, ‘Oh, I’ll be fine,’ and then you’re like, ‘Oh, I’m in my thirties now. I’m not fine.’ So that was a precarious day of shooting.”

The machine even proves to be challenging for the confident Alan, who starts to experience bouts of vertigo as a result of an inner ear disorder known as Ménière’s disease. Such a setback has “got to be, especially for someone like Alan or any one of the astronauts coming from a test pilot background, just a huge liability to their ability to compete,” McDorman notes. “So much of their driving force, of what they do, is competition and ambition and pushing the limits, not just of their own bodies, but of the aircrafts they’re testing. … Being confronted with something that he can’t work his way out of, it’s just going to humble [Alan], in a way, and make him vulnerable in a way that he’s not used to.”

The vertigo will also force him to seek help from aerospace nurse Dee O’Hara (played by Gotham‘s Kaley Ronayne) as Alan tries to stay in the running to be the first American man in space. But he’s got some stiff competition, especially from John Glenn (Suits‘ Patrick J. Adams), who isn’t Alan’s favorite person. “I think Alan Shepard’s real problem with John is that they are so similar, and from his point of view, John’s not honest about it,” McDorman suggests. “I think Alan is unabashedly competitive and very honest with himself about the nature of his ambition and his appetite to go further, to go faster, to be better than anyone else, and John, especially publicly, curated this image of being a family man, a Christian man and a moral man. All those things are true about John, but I think Alan felt like it was a little bulls—t, because at the end of the day, he’s a mad dog competitor fighter jock just like the rest of them, yet he views himself as morally superior to his peers, and I think that really irks Alan. I think it especially irked him that John was more adept at kind of manipulating that public persona to give him an edge that I think Alan thought was irrelevant.” 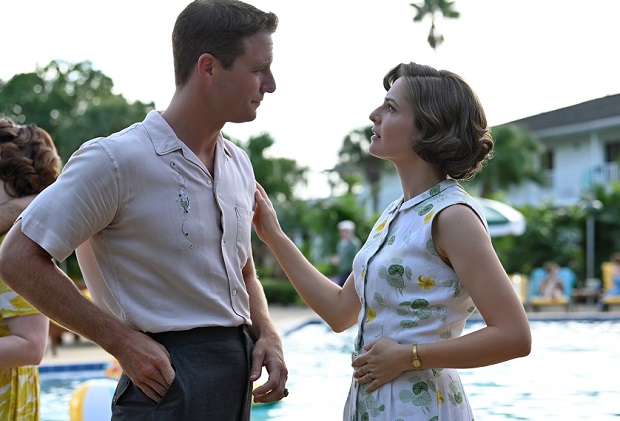 And that’s not the only complicated relationship in the astronaut’s life: He’s a national hero with a wife, Louise (The O.C.‘s Shannon Lucio), and a family, but he’s also an unfaithful man. “Reconciling those multifaceted parts of his personality was one of the biggest joys about playing him, one of the things that was exciting as an actor, getting in his head and seeing how does he reconcile those two parts of his personality on a day-to-day basis,” McDorman shares.

For his part, McDorman believes the real Louise knew about her husband’s infidelity, but “there’s only so much actual hard data that you have from Louise or Alan, directly,” the actor adds. “They were very private people. They weren’t John and Annie Glenn. I think he did not like the spotlight, and he didn’t even write his own [biography]. Some of it has to just be speculation and trying to piece it together. I think she knew, and I think she knew that’s the man she married, and for all of those fallibilities, there must have been something really special and strong at their core that could weather each and every one of those storms.”

In fact, McDorman and Lucio — who both read Shepard’s posthumous biography Light This Candle — frequently discussed their characters’ marriage and tried to show that “[Louise] was the one that kept him from, for lack of a better term, spinning off into orbit and getting a big head and just thinking he was too big to fail,” McDorman says. “[They] had a relationship that really grounded him, even though he would have these appetites that would seemly destroy a marriage. They found some kind of version of an arrangement that worked well for them.”

And when it comes to the Mercury Seven astronauts who lived into old age, “apart from John Glenn and Annie Glenn, [Alan and Louise] were the only couple of the [group] that stayed married all the way until he died,” McDorman notes. “The two of them somehow, despite all those truths, made it work and had a happy family.”