Burnham lands in a strange new world nearly a thousand years in the future as Star Trek: Discovery enters Season 3… a future where everything she once knew is just ancient history.

In case you forgot — it’s understandable; it has been about 20 months — last season ended with Burnham and the Discovery crew zapping through a wormhole that sent them 930 years into the future, to the year 3188. Thursday’s premiere opens with a mystery man showing up at an office day after day by himself, with a case bearing a Starfleet insignia. (We’ll come back to him, I’m sure.) Then we meet Book, played by new cast addition David Ajala, as he’s dodging phaser blasts from an angry alien who’s accusing him of stealing his cargo. Burnham emerges from the wormhole just in time to crash into Book’s ship, sending them both hurtling down to the surface of an untamed planet. Burnham reboots her suit in time to raise shields and cushion her fall, but when she tries to contact the Discovery, she gets no response. The suit tells her it detects multiple life forms on the planet, though, and she lets out a celebratory howl. She’s not alone! 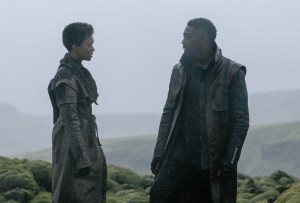 But that’s a double-edged sword, it turns out. When she approaches the wreckage of Book’s ship, he ambushes her, and suddenly, they’re trading punches. Burnham gets the upper hand, pointing a phaser at his head, but he just laughs and calls it an “antique.” He derisively dubs her “Rocket Girl,” but since she lost her crew, she has nowhere else to go. (And is it just me, or do these two definitely have a vibe? #Bookham?) He takes her aboard his ship, where he has a cute cat named Grudge (“She’s heavy… and she’s all mine”), and tells Burnham he has temperature-sensitive cargo he’d like to keep hidden. When he sees the Starfleet insignia on her chest, he laughs again: “You believe in ghosts.” The Federation hasn’t existed for years, he explains, since “The Burn,” aka “the day the galaxy took a hard left.” About a hundred years ago, a bunch of dilithium exploded, a lot of people died and space ships were no longer tenable without a warp drive. 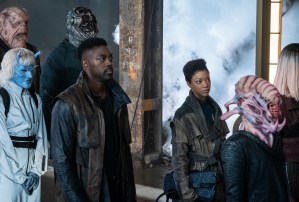 Book needs to unload that cargo, so he takes Burnham to a bustling marketplace where they get hassled at the door by blue Andorians. Book tells Burnham he works as a courier and is given just enough dilithium to pick up cargo and bring it back… and when she gets trapped by red lasers by security, he grabs everything she has and runs off. Security hits her with a truth serum gas that leaves her loopy and giggly — this is the most fun we’ve seen Burnham have in three seasons — and when Book gets cornered by the angry alien from earlier, he and Burnham join forces to fight their way out. Book scrambles to grab all the dilithium he can, and they use a personal transporter to beam back to the untamed planet. They’re followed by aliens, but they fight them off, beaming one more time into the middle of a lake to escape. She does punch him, though, for ditching her like that.

Once they’re safe, Book takes off his shirt (!) to dry off while Burnham notices she’s been shot. No problem: Book chants something to summon a plant that can keep her wound from getting infected. But they’re not safe for long. The aliens beam in again, forcing Burnham and Book to drop their weapons and demanding his ship’s security code. Book reluctantly gives it to them (“Sticky”), and they reveal his cargo: a giant space worm that quickly devours two of the aliens, with the others transporting away in terror. The worm grabs Burnham, too, but Book talks soothingly to it, and it harmlessly spits her out. So he’s a sort of Doctor Dolittle who can speak to plants and animals, I guess?

He and Burnham fly off to Sanctuary Four, where space worms frolic freely, and he tells her he’s an outcast in his family of smugglers and traders, but “I wouldn’t trade who I am for anything.” She still wants to reconnect with her crew, so he takes her to… the old Federation station where the mystery guy from the beginning sits! His name is Aditya, and he’s a Federation liaison; his father was a Federation officer, and he’s been showing up every day out of loyalty just in case someone arrives. And now she has! He searches for the Discovery‘s warp signature and can’t find it… but he also doesn’t have access to far-off sectors, so there’s still hope. He opens the Federation case and pulls out an old Federation flag, which they hang up together. This future is starting to look bright, isn’t it?

Alright, Trekkies, it’s your turn: Give the Discovery season premiere a grade in our poll, and then hit the comments with your thoughts and predictions.