No need to shake the box; we know exactly what Shonda Rhimes is gift-wrapping for us this Christmas: Bridgerton, her first Netflix series, drops December 25, the streamer announced Thursday. Not only that, but 10 dazzling images were released that make the romantic drama look as sumptuous as it does promising. The costumes alone — wow! 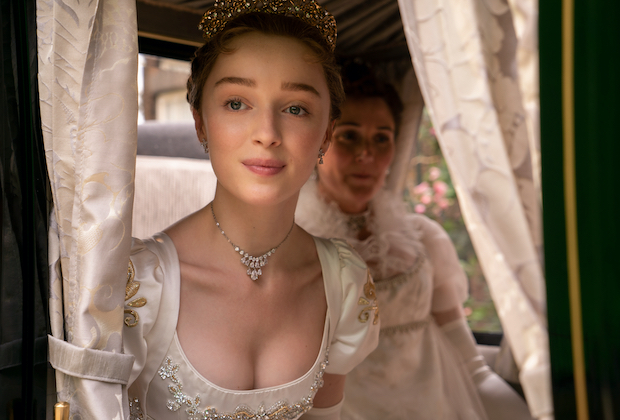 Based on Julia Quinn’s bestselling series of novels and created by longtime Rhimes colleague Chris Van Dusen (Scandal, Grey’s Anatomy), Bridgerton, per the official logline, “follows Daphne Bridgerton (Younger alum Phoebe Dynevor), the eldest daughter of the powerful Bridgerton family as she makes her debut onto Regency London’s competitive marriage market. Hoping to follow in her parents’ footsteps and find a match sparked by true love, Daphne’s prospects initially seem to be unrivaled.”

But, as there always is when getting hitched, there’s a… well, you know… a hitch. “As her older brother begins to rule out her potential suitors, the high-society scandal sheet written by the mysterious Lady Whistledown (voiced by Julie Andrews) casts aspersions on Daphne. Enter the highly desirable and rebellious Duke of Hastings (For the People’s Regé-Jean Page), committed bachelor and the catch of the season for the debutantes’ mamas. Despite proclaiming that they want nothing the other has to offer, their attraction is undeniable, and sparks fly.”

The cast also includes Golda Rosheuvel as Queen Charlotte, Luke Newton (The Lodge) as Colin Bridgerton, Jonathan Bailey (Broadchurch) as Anthony Bridgerton and Ruby Barker (Wolfblood) as Marina Thompson. Take a peek at the stunning images in the photo gallery above, then hit the comments: Does the period piece look like an exclamation point to you, too?