Warning: The following contains spoilers for Tuesday’s The Haves and the Have Nots. If you’d rather watch first, read later, make like Hanna when she sees something sinful and go the other way.

Picking up right where last week’s The Haves and the Have Nots left off, Tuesday’s episode started with Benny playing 20 questions with Derrick. Mind you, all 20 of those questions were, “Did you rape my mother?” When at last Derrick admitted that he had, Benny knocked him to the ground. And that was kinda… well, that. It was a beatdown, technically — Derrick did take a hit, and he did go down. But when he refused to get up and fight, Hanna’s son told the former drug addict that he no longer worked at the Cryers’ and let him leave without so much as having his face rearranged. Hmm… something tells me this won’t be their last showdown.

‘THE MAN LIKES DANGER AND EDGE’ | From there, “A Sixth Sense” cut to Madison’s ultra-awkward, ultra-funny lunch with Jeffrey and Colby — at which the nurse seemed to be the main course. Colby delighted in revealing tidbits about Madison’s past (“Did you tell Jeffrey about your go-go dancing?”), but when left alone with Jeffrey, assured him that “he really likes you.” Still, Jeffrey should ask Madison about — dramatic pause — “a few things.” Before they took off, Colby decided that they should teach Jeffrey’s homophobic mother a lesson by going skinny-dipping in her pool. Colby even knew some guys who’d want to come along and help “introduce her to some of the real gays.” Spoken like someone who has never met Veronica “Scary-Ass” Harrington! Speaking of whom, she caught Samuel and Laura canoodling outside her front door but played it off. “I love love,” she lied.

Back at the Cryers’, Benny banged on the door, which Hanna answered so fast, she must have been standing right on the other side. After revealing that no, he hadn’t actually killed Derrick, Benny expressed his astonishment that his mother was just letting go of what happened. Was there more to it than that? “You talkin’ to this dude?” No, Hanna insisted. But then again, “the man said he changed, Benjamin. If God says somebody can change, who am I not to believe Him?” Eh, a sensible person who’ll eventually learn that Derrick’s planning to rob Veronica blind? Later, Al the Accountant showed up to teach Hanna in an afternoon everything that she needed to know to manage Katheryn’s millions. Meanwhile, at Charles’, Landon endeavored to get Candace booked on a bunch of talk shows in hopes of facilitating a reunion with the president-elect. When Oliver scoffed at the notion a little too loudly, Charles revealed that he’d overheard and threatened to can the weasel. (No idea how Landon or Charles thinks this is going play out!) 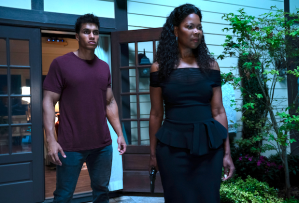 ‘EVERYBODY KNOWS THE DEVIL’ | Shortly thereafter, a Secret Service agent supplied Landon with photos of Oliver meeting at a private air strip with his coke dealer, the Kiwi mercenary who’s tailing Veronica for Jim. Why, Landon wondered, was Oliver putting his drug supplier on his daddy’s plane? In any case, with this intel, Landon intended to set a trap for his sparring partner. (Whom he really could’ve gotten fired only a scene before, if he’d wanted to.) At the Iron Bone, Vinny and Sandy went another round about the former being soft. When the latter challenged his uncle, noting that Wyatt had stabbed him, yet Wyatt still had a pulse, the new don knocked his nephew out of his seat and threw him out of the bar. “The only joke in this family,” he railed at Sandy, “is you.” As the hour drew to a close, Colby raised a glass to “making an evil bitch more evil” as he and Jeffrey set off with pals Trevor and Terry to make a splash at Veronica’s. (Um, pal, that evil bitch is plenty evil enough, thank you very much!)

Though the queen bee is super concerned about security, the fellas just walked into her back yard and, except for a nervous Jeffrey, stripped down. Ordinarily, she would have heard them, but she was busy rewinding through a series of epic — and I do mean epic! — flashbacks of her tumultuous relationship with David. Outside, Colby eyed Samuel, who apparently is going to clean that pool 24/7 for the duration of the season. Day, night, whatever — he’s there. When the hunk declined to join the boys’ pool party, Colby asked him to “tell that old bitch that we are in her pool.” Once he did — letting himself in (does Veronica not lock any doors, ever?) — Veronica raced out to be greeted by a pool full of hotties. “Hey, bitch, this is your Welcome to the Real World party,” said Colby. “There are gay people in the world — get used to it.” Instead, she went inside to get a gun. Oh, Colby. Veronica is just too crazy to be trifled with.

What did you think of “A Sixth Sense”? Do you expect Derrick to survive the season? Hanna can’t still have feelings for him, can she? I can’t be the only one hoping she’ll get together with David… or can I? Hit the comments.