After a long delay and countless rumors, The Bachelorette is finally back and ready to give out some roses. But is this season already over before it even starts?

Monday’s premiere finds new Bachelorette Clare — remember her? Juan Pablo dumped her waaaaay back in 2014, and she struck out in two seasons of Bachelor in Paradise, too — determined to find Mr. Right, since she’s now (gasp!) 39 years old, making her the oldest Bachelorette in history. (Yeah, get ready to hear that about a thousand times this season.) Chris Harrison promises we’ll learn “the truth about all the rumors” (!) in a season that’s “COVID-free and, hopefully, full of love” (?), leading into the typical Clare biographical puff piece. (Hey, she has cute dogs!) 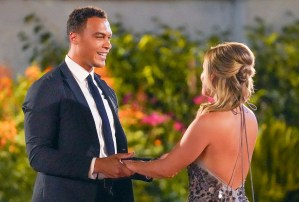 Clare heads to the thoroughly sanitized La Quinta resort in sunny Palm Springs — it’s not the Bachelor mansion, but it’ll do — as we meet some of the dudes competing for her affections… and watch them get nasal swabs shoved halfway up into their skulls. (2020, man. 2020.) After they get the all-clear, the limos start arriving, and Clare faces the usual parade of weirdos, including “boy band manager” Kenny, who’s wearing a T-shirt with a picture of her dogs on it (red flag!), and Jay, who arrives in a straitjacket… for some reason. But she also meets a few genuine contenders — especially towering ex-football pro Dale, who makes Clare’s eyes light up like fireworks and literally sweeps her off her feet. There’s a spark right away, and when he walks away, a shaken Clare doesn’t mince words: “I definitely feel like I just met my husband.” 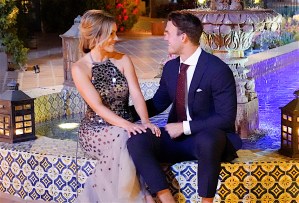 More guys show up, but Clare is just in a love fog, still gaga over Dale. She dutifully chats with a few other guys at the cocktail party, and enjoys a carnival game with Ben outside. But she also sits down with Dale, and the chemistry is clearly there as they talk about how important their families are to them. She’s feeling serious butterflies, she says, and gushes to the camera: “I like him.” So it’s no surprise when she hands Dale the coveted first impression rose, telling him that after she talked to all those different men all night, “you’re the one I want to keep talking to.”

There’s also some manufactured drama with Tyler C. accusing Yossef of “being reckless on Instagram” (??), but really, who the hell cares? They’re not Dale. The rose ceremony arrives, and she gets rid of… Tyler C. and a bunch of other guys who aren’t Dale. (Hey, she didn’t bother learning their names either.) And in the preview for the rest of the season, she does swap spit with a few different fellas, but the guys start chafing at Clare’s obvious fixation on Dale, calling him “fake” and even threatening a mass walkout (!!). We see a weepy Clare as Chris Harrison tells her: “You’ve just blown up The Bachelorette.” Plus, we see a new limo pulling up, and a mystery figure getting out… (Are the online rumors true? Does Clare ditch the show with Dale, forcing the show to bring in a relief Bachelorette in Tayshia? It sure looks that way, doesn’t it?)

Alright, Bachelor Nation, it’s your turn: Give tonight’s premiere a grade in our poll, and then hit the comments to share your thoughts.