Star Trek: Discovery is boldly going into its third season this week… but thanks to a game-changing time jump, it feels more like a maiden voyage.

“In many ways, it was like doing a Season 1 show, because we were kind of starting over again,” Discovery executive producer and co-showrunner Michelle Paradise tells TVLine. That’s because Season 3 of Discovery — premiering this Thursday, Oct. 15 on CBS All Access — leaps forward a whopping 930 years into the future, far beyond where any previous Trek series has gone before. (If you remember, Season 2 ended with Burnham and the Discovery crew flying into a time-traveling wormhole.) What does the universe even look like in the year 3188? Figuring that out was part of the fun.

“We’re firmly in a new future where we are past all established canon,” Paradise says. “I keep calling it ‘fresh snow.’ We’ve got a landscape in front of us that we can populate as we like.” But that doesn’t mean the new season won’t resemble the Trek we know and love, Paradise reassures us. “Being beyond canon doesn’t mean that we ignore anything… but what going to the future lets us do is take a look at past canon in new ways. So species that may have been friendly toward one another, or not friendly to one another: Can we mix those up in new ways?”

The massive time jump also puts a new spotlight on Burnham and the Discovery crew as characters, since they don’t have the ties to Trek canon that they had in the first two seasons. Stranded in this strange new world together, the Discovery crew has to rely on each other more than ever. “Since they’re going so far into the future, all of these characters are leaving everyone else behind,” Paradise notes. “We get to really challenge them in new ways, and we get to dig deeper into all of these characters that we’ve come to love over the past couple of seasons.” 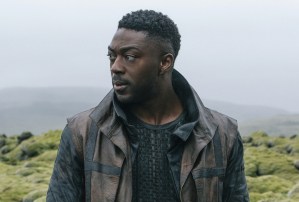 They’re not alone, though: Season 3 also introduces a host of new characters who are already living in this new future, including a charming rogue named Book, played by Supergirl alum David Ajala. In the premiere, Burnham crash-lands on an untamed planet along with Book, and they hit it off right away — “hit” being the operative word. “There’s a spark,” Paradise concedes with a laugh. “They meet each other when they’re fighting each other, so that’s definitely spark-y.” When Book is first introduced, “we’re not entirely sure what to make of him,” she adds, but “there’s a much, much deeper layer to him, and his motivations are maybe different than what we would expect them to be.”

Burnham is forced to follow Book’s lead in the premiere, since she is “a stranger in a strange land,” as Paradise puts it. “Having someone who is there and can help her guide her through, at least in the beginning, story-wise, that was really important. And they will continue to be in each other’s orbits as the season progresses.” Does that include any potential for romance? Paradise won’t rule it out: “As far as a spark goes, who knows where that kind of thing goes?”

Season 3’s big question, though, is what happened to Starfleet and the Federation; Burnham learns from Book that the Federation crumbled after a mysterious incident known as “The Burn.” Like Season 2’s Red Angel storyline, “The Burn” and how it impacted the Federation will be this season’s central mystery to unravel, Paradise hints, and will be “driving Burnham and the crew of the Discovery through the entire season.” The more things change on Discovery, it seems, the more they stay the same.

Got predictions for Season 3 of Star Trek: Discovery? Beam down to the comments and share them with the rest of the crew.