With Nicole Kidman starring in a HBO drama written by David E. Kelley, it’s easy to imagine The Undoing as a sort of Big Little Lies spinoff, with Kidman’s Celeste moving from Monterey to New York City and finding love again with Hugh Grant after that unfortunate Perry situation. (Hey, she deserves it!) But The Undoing — premiering Sunday, Oct. 25 at 9/8c; I’ve seen five of the six episodes — is a different animal altogether. It’s more of a conventional thriller than Big Little Lies was, favoring plot over character as it spins a twist-laden murder mystery. And if it’s ultimately not as emotionally complex as Big Little Lies, it’s more immediately gripping, with a breathless pace and a wealth of compelling performances. 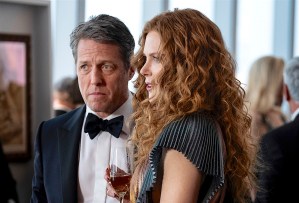 Kidman stars as Grace Fraser, a well-to-do mom and psychologist married to oncologist Jonathan (Grant), sharing a luxury Manhattan apartment with him and their teen son Henry (Noah Jupe). Life is good for the Frasers: Their marriage is solid, and they’re awash in upper-crust privilege. Kelley has shown he has a knack for lampooning the very rich, and the jabs are sharp here in the early going. Noah’s school holds a black-tie fundraiser where parents are willing to pay a thousand dollars for a glass of water just to show how charitable they can be (or how little a thousand dollars means to them).

But this is a murder mystery, after all: A stunning tragedy soon rocks their world, someone ends up dead and Grace is left clutching at straws as her carefully manicured life begins to crumble before her eyes. I don’t want to say much more, because the primary pleasure of The Undoing is how it doles out its twists with efficient precision. It plays like a compulsively readable page-turner as Grace is pummeled by a relentless barrage of jaw-dropping revelations that reveal serious cracks in the foundation of her marriage. Emmy winner Susanne Bier (The Night Manager) directs all six episodes, and she expertly amplifies the tension with jittery framing and intense close-ups with blurry edges. HBO is sticking with a conventional weekly release, but this show is custom-made for a binge; each episode ends on a stunning cliffhanger that leaves you wanting, no, needing to see more. 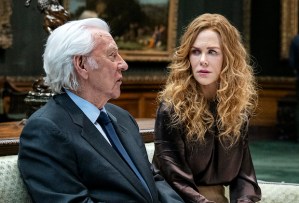 Kidman does most of the heavy lifting here, and not surprisingly, she’s terrific. Grace is put through the emotional wringer as her suspicions mount and she begins sniffing out lies. (Big ones, not little ones.) I was a bit concerned at first that Grace was too reactive a character, but eventually, she does start to take some agency and put her psychology skills to good use to get some answers. Kidman is given a thousand different emotions to play, and she’s able to go from confused to scared to sad to angry seemingly within moments, giving the series a hefty emotional anchor even as the twists start to pile up.

Hugh Grant is an underrated actor — go watch A Very English Scandal if you doubt that, or Paddington 2, for that matter — and he gets to show off considerable dramatic chops here, as Jonathan’s luck turns very bad indeed. The supporting cast is full of gems, like Lily Rabe as Grace’s lawyer pal Sylvia, who’d fit right in on Big Little Lies (“You live in New York! It’s a crime not to be frantically busy!”), Donald Sutherland as Grace’s imperious father and Noma Dumezweni as blunt defense attorney Haley Fitzgerald, who swiftly cuts through the bull: “I don’t make jokes. I’m not funny.” Sure, there’s a chance that once we discover who the killer is, The Undoing‘s appeal could evaporate in a puff of air, revealing itself to be all twist, no substance. But since we still don’t know whodunit, we can’t help but admire the craftsmanship on display here. Buckle up… and leave some room on the floor for your jaw.