Slip on those leg warmers and pull your best Scrunchies out of storage, because Dancing With the Stars is taking us back to the ’80s.

Though Season 29 hasn’t had specific themes every week — last Monday’s performances, for example, were an odd mish-mash of emotional routines and random sambas set to “Party in the U.S.A.” — the competition series went all in on this week’s ’80s motif. The side ponytails! The bodysuits! The hairstyle on poor Gleb!

But for one eliminated couple, ’80s Night was far from totally tubular. Before we get to the results, let’s break down the evening’s performances:

Justina Machado and pro Sasha Farber (Jazz): Jazz routines are fairly rare on Dancing With the Stars, so it thrilled me that Justina, one of the season’s strongest performers, got to tackle it this week instead of traditional ballroom. The end result was an extremely fun, nostalgic routine, but I was expecting a bit more from the choreography; Justina seems up for the challenge of more intricate movements (and isn’t afraid to take a bucket of water straight to the chest!), but so many of the combinations here were surprisingly simple. Did Justina nail it anyway? Totally. Could she have nailed a routine twice that difficult? I suspect yes. Judges’ Score: 24/30

Jesse Metcalfe and pro Sharna Burgess (Tango): I do agree that Jesse has been on the sliiiightest of inclines since Season 29 began, improving a tiny bit each week (and he’s certainly got an admirable attitude, given the weekly critiques). And yet, five weeks in, I’m shocked the judges aren’t making more mention of Jesse’s facial expressions, or lack thereof. Yes, his timing was off throughout this tango, but I was more distracted by the strange pout on his lips throughout the number — and the stony look in his eyes, once again, made it hard to decipher if he’s actually having a good time out there, or simply frowning and bearing it. Judges’ Score: 19/30

Chrishell Stause and pro Gleb Savchenko (Cha-Cha): Chrishell had a very steep incline between Weeks 1 and 2, then again between Weeks 2 and 3. (The girl started out with fours from the judges, don’t forget!) But now, the actress seems to have plateaued: I adore her enthusiasm so much, but she isn’t mastering the steps quite enough, particularly during really crucial sections of this cha-cha. And though her chemistry with Gleb is effortless, I’m not sure he’s choreographing her in a way that shows her strengths or challenges her to perfect the movements; there’s lots of entertaining filler, but it becomes less impressive when the core ballroom steps are all over the place. Judges’ Score: 19/30

Jeannie Mai and pro Brandon Armstrong (Jazz): I have to admit: I’ve become a little obsessed with Jeannie in these last five weeks. Her commitment to playing different characters, and the sheer joy she exudes while dancing, are always so fun to behold. Much like Justina, I think Jeannie could have handled more complex choreography here, but her and Brandon’s final product was still totally rad. Judges’ Score: 24/30

Monica Aldama and pro Val Chmerkovskiy (Tango): I like Monica! I like Val! A lot! But this routine was a tad overscored, no? Monica does have an impressive flexibility, and her extensions — like when she slid her leg through the gap in Val’s — are terrific. But Monica also mis-timed those opening step-and-snap moves, and this tango lacked a certain passion that the style demands. Judges’ Score: 26/30 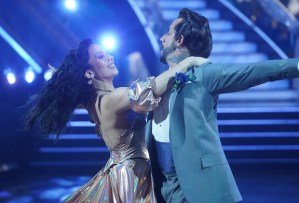 AJ McLean and pro Cheryl Burke (Waltz, pictured): Carrie Ann Inaba’s opening comments for AJ nearly matched the words I wrote down halfway through his performance: “Wow, such an elegance!” I’ve been waiting for AJ to break out as a serious contender, and this waltz seemed to do it; though he seemed a bit intimidated to carry Cheryl through those floor spins, he also brought a lovely gentleness to the choreography that his previous ballroom performances didn’t possess. Judges’ Score: 24/30

Skai Jackson and pro Alan Bersten (Jazz): After last week’s sensational foxtrot — the first time in several weeks that Skai seemed to surrender to the choreography and music — I was bummed to see her panicked expression make a comeback (though Derek did her a solid by pointing it out). I want so badly for Skai to sink down into all of Alan’s choreography the way she did last week’s, but that isn’t happening consistently enough just yet. Judges’ Score: 24/30

Vernon Davis and pro Peta Murgatroyd (Tango): Vernon has so, so much potential, but it went largely untapped in this tango. (That awkward descent of the ballroom stairs didn’t help, either. So slow! So odd!) From the unenthused expression on his face to his misplaced feet near the middle of the routine, Vernon seemed uncomfortable from start to finish — but perhaps we should just blame that on the hair-band wig he was wearing. Judges’ Score: 21/30

Kaitlyn Bristowe and pro Artem Chigvintsev (Tango): Kaitlyn is always a strong performer, but Monday’s so-so episode, in which even some promising contestants faltered a bit, only served to highlight her strengths. Her confidence while in frame, the effortless use of props at the top of the number, the unexpected but completely delightful breakdancing — it was all extremely refreshing, and I’m excited to watch Kaitlyn keep growing. Judges’ Score: 27/30

Nelly and pro Daniella Karagach (Samba): Was I literally cheering from my couch as Nelly performed this samba? Yes! I! Was! Of course, the rapper is far from technically perfect, and parts of this routine were performed so energetically that his and Daniella’s hold got a little wonky. But after weeks of Nelly looking a tad embarrassed to be on the show, it was a pleasure to watch him give it his all in the samba, commanding the choreography with an exuberance and certainty we hadn’t yet seen. Judges’ Score: 24/30

Johnny Weir and pro Britt Stewart (Contemporary): Our already-high expectations for Johnny were set even higher with this contemporary — a style that seemed, on paper, to be perfectly suited for his figure skating background. Well, great news: He slayed it. There aren’t many male contestants this season that possess such musicality, and Johnny used every inch of his body to communicate this number’s heartache and longing. Judges’ Score: 29/30

Nev Schulman and pro Jenna Johnson (Quickstep): It’s appropriate that Nev and Jenna were dancing the quickstep, ’cause my goodness, this dance was fast. Ray Chew Live, did you speed up A-ha’s “Take on Me”? Anyway, despite the imperfect frame that Carrie Ann mentioned, Nev executed this extremely dense choreography with gusto; the quickstep can’t afford to look clunky, and Nev’s energy never seemed to diminish. Judges’ Score: 26/30

Now it’s your turn! How do you feel about Jesse and Sharna’s elimination? And who impressed you the most (or least) on ’80s Night? Tell us in the comments!