“I never understood…. why a motel room?” The series finale of Room 104 took the words right out of our mouths.

The final curtain of the genre-defying anthology focuses on the passing of time — and the passing of the torch — as Keir (soulfully played by Ntare Guma Mbaho Mwine) prepares for a mysterious Generation Ceremony that symbolizes his existence on… a space ship? (Didn’t see that one coming.) Let’s discuss this swan song from the top, shall we?

We meet a melancholy, elderly Keir as he dutifully repeats an axiom: “Generations upon generations have sacrificed, so that generations upon generations may prosper.” But as watch him complete menial tasks from inside his room, it doesn’t seem like he feels the words he speaks. He seeks answers from Agnus, a Siri-like digital companion that appears on his TV screen, but unfortunately, Agnus is mum. With the ceremony rapidly approaching, he appears nothing but apprehensive.

We then visit two key time periods in Keir’s life. In his childhood, we learn his mother was a housekeeper at the motel. While playing with his friend, Ryoko, she scans the wall with an egg-shaped piece of metal called “the stone.” A blazing, blue panel opens, before it turns bright red. We then hear his mom, Wendy, say: “The mission is bigger than any of us. It’s more important than you or me or Ryoko and her family, but it’s going to be worth it… I’m sorry you had to find out like this, Keir.”

We hop over to a middle-aged Keir, who’s attending his mother’s Generation Ceremony. “May I offer you the flower?” Agnus asks. It seems like it should be a jovial moment, but feels more like a funeral. After receiving a white lily on the screen, Agnus tells Wendy she will be remembered. Wendy hugs her son, and heads toward the door.

We cut to Keir adorning his young daughter Imi with a metal headdress. He runs the stone over the silver top, causing the girl to immediately fall asleep. His wife comments how he hated his mom for years, for forcing him into “this life.”

“How is this a life? We get no say in anything,” he replies. “It’s not about us,” she reminds him. “It’s about the mission and the future.”

We then see Agnus scanning Ryoko’s body with a beam, as a red dot pulsates on the screen before them. At her own ceremony, Ryoko receives the portentous white lily. 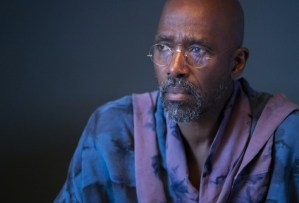 In the present, Agnus admits, “I consider it my greatest failure… that I couldn’t help you and Ryoko before she…” He cuts her off. He doesn’t want to talk about it. Instead, he thumbs a pamphlet entitled, “Celebration: A Life Well Lived, a Life Well Ended.”

Jumping backward again, Imi finds the stone and opens the electronic panel door. Outside the room’s window, space appears. Stars shine bright in the never-ending blackness, as Keir and Imi both begin to float in the gravity-free confines of the room. Present-day Keir stares out at that same galaxy before tapping the panel and returning the view to its former mirage. The room is actually a compartment on a ship.

The eldest Keir struggles to come to terms with what he perceives were lies he was fed as a child. When, a fully grown (and pregnant!) Imi appears, he repeats the axiom to her, though he’s still tweaking over his existential crisis. He can’t understand what the point of living on the ship was. “I knew my fate would only lead me to this moment, and I let that disappointment ruin most of my life,” he confesses. “And I wasn’t a good husband to your mother, and I wasn’t there for you… not the way I should have been.”

He tells her that whether he gets a lily and walks out of the airlock or gets a daffodil, earning him another year on the ship, it doesn’t matter, “because I don’t deserve your gratitude, and my life isn’t worth remembering.” Imi tells him she loved her life with him, and knows he didn’t choose it. They embrace.

“I never understood. Why a motel room?” he asks her.

“I just assumed it was because back on earth they’d always stay in places like this on their way to somewhere else,” she speculates. “They weren’t home, but at least they were safe. With people they loved, hopefully.”

His daughter’s kind words lift his spirits. Keir looks forward at the screen, and the Generation Ceremony commences. His face softens, as he finally seems ready to accept his fate. Whatever it may be.

And with that, we bid Keir and Room 104 adieu. What did you think about the series’ rather spiritual summation? Grade the episode and season below, then hit the Comments with your theories, thoughts and eulogies.