After more than six months off the air, Supernatural at long last returned with a new episode on Thursday, and much like Dean’s new nightgown, it felt like being wrapped in hugs.

With the bunker’s pipes falling apart, Dean and Sam head to the grid control room to investigate and find Standby and Reset buttons. Whenever his computer has too many pop-up ads, he hits Reset, Dean reasons, so he does the same here. The bunker powers back up, but with an unexpected consequence: The button releases a sweet, older woman, whom Dean finds folding his Scooby-Doo underwear. Mrs. Butters explains that she’s a wood nymph who lived in the bunker and helped the Men of Letters by cooking, cleaning, etc. When the men didn’t return — Dean informs her that Abaddon killed them all — Mrs. Butters placed herself and the bunker in Standby mode to keep it safe. Now that she’s out, she shows Dean and Sam the extra oomph her magic gives the place. For starters, they have a monster radar system in the table! And the telescope is an inter-dimensional geoscope! (Dean mentions that he didn’t see anything when he looked in it, which is not good, Mrs. Butters notes.) 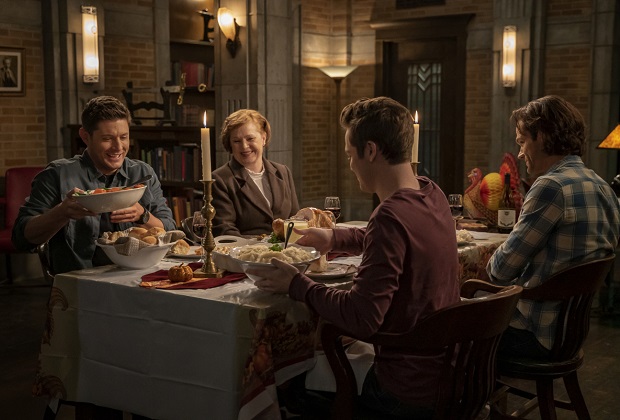 With their new radar system giving them a much-needed break, and Mrs. Butters fixing them crust-less sandwiches for their hunts, life is good. Mrs. Butters even decorates and bakes to make up for all the holidays and birthdays Dean, Sam and Jack don’t normally take the time to celebrate.

“We are so keeping her,” a giddy Dean declares. Like a doting nanny, Mrs. Butters also worries about Dean’s cholesterol — it’s about time someone did! — and gives Sam a pep talk before his date with Eileen.

But when Mrs. Butters meets Jack, she has a less friendly reaction. “What are you?” she asks accusingly.

After being filled in on Jack’s parentage, Mrs. Butters pretends to accept him and plies him with smoothies. Jack starts to catch on to Mrs. Butters’ true nature when he finds an old Men of Letters video of her ripping off a Nazi’s head. When Jack confronts her, she reveals that the video was a test to see if he’s dangerous and bloodthirsty. And those smoothies? They’ve zapped him of his powers. She’s trying to protect Dean and Sam, who don’t know how powerful Jack has become, Mrs. Butters explains after trapping Jack. She’s doing what needs to be done to keep her family and the bunker safe, while ridding the world of all monsters. Then she instructs Dean to kill Jack. 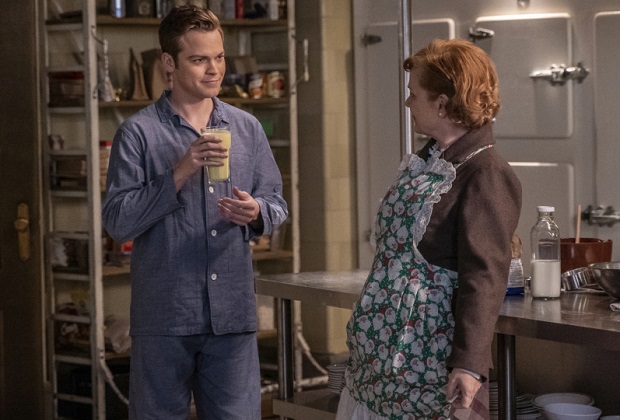 “We had a good thing going, and of course you had to go full Nurse Ratched,” Dean sighs. He may still be angry at Jack, but he’s not about to let evil Mary Poppins take him out. A disappointed Mrs. Butters locks up Dean with Jack and turns her attentions to Sam, who pretends to go along with her plan. But that only lasts for so long before Mrs. Butters gets clued in, ties him up and starts ripping off his fingernails. (EWW! And OUCH!)

Meanwhile, Dean and Jack bust out and hit the Reset button, which only temporarily gets rid of Mrs. Butters. Dean and Sam plead with her that if she hurts Jack, she hurts them, too, and that he can save the world. But the Men of Letters’ Cuthbert manipulated her and told her she couldn’t go back to the forest because of monsters like Jack. All she really wanted was to go back home, she declares, breaking down.

After the dust settles, Mrs. Butters fixes Sam’s fingernails and informs the boys that since she is leaving for home, the bunker will go back into Standby mode without her magic. “Dean, eat your vegetables. And Sam, cut your hair. And Jack, go save the world,” she says before parting.

Later, Jack — now with his soul intact and feeling the weight of what he’s done — wonders if he can really defeat God. Sam responds that he’s the only one who can. Then Dean enters with a lopsided birthday cake he made for Jack, who makes a wish and blows out the candle. (Dean didn’t get a birthday celebration, because “at your age, I wouldn’t think you’d want to celebrate your birthday,” Mrs. Butters joked earlier. Oh snap!)

Supernatural fans, what did you think of the show’s return? Grade it below, then hit the comments!