It’s finally happening: Supernatural returns this Thursday (The CW, 8/7c) with the first of its final seven episodes, which will feature the climactic conclusion of the Winchesters’ battle against God himself.

Dean and Sam will get help from their most trusted allies, including some returning familiar faces in their fight against the Almighty foe. But “ultimately, it’s gonna come down to Sam and Dean, two guys from Kansas, facing off against the Supreme Being,” co-showrunner Andrew Dabb shares in the following Q&A. “So they’re still the underdogs in that fight.” Plus, their secret weapon against God is going through a “debilitating” journey now that Jack’s soul has been restored.

Below, Dabb also previews the show’s upcoming wee Winchesters flashbacks and reveals the guest stars that, unfortunately, won’t be back for the final run. 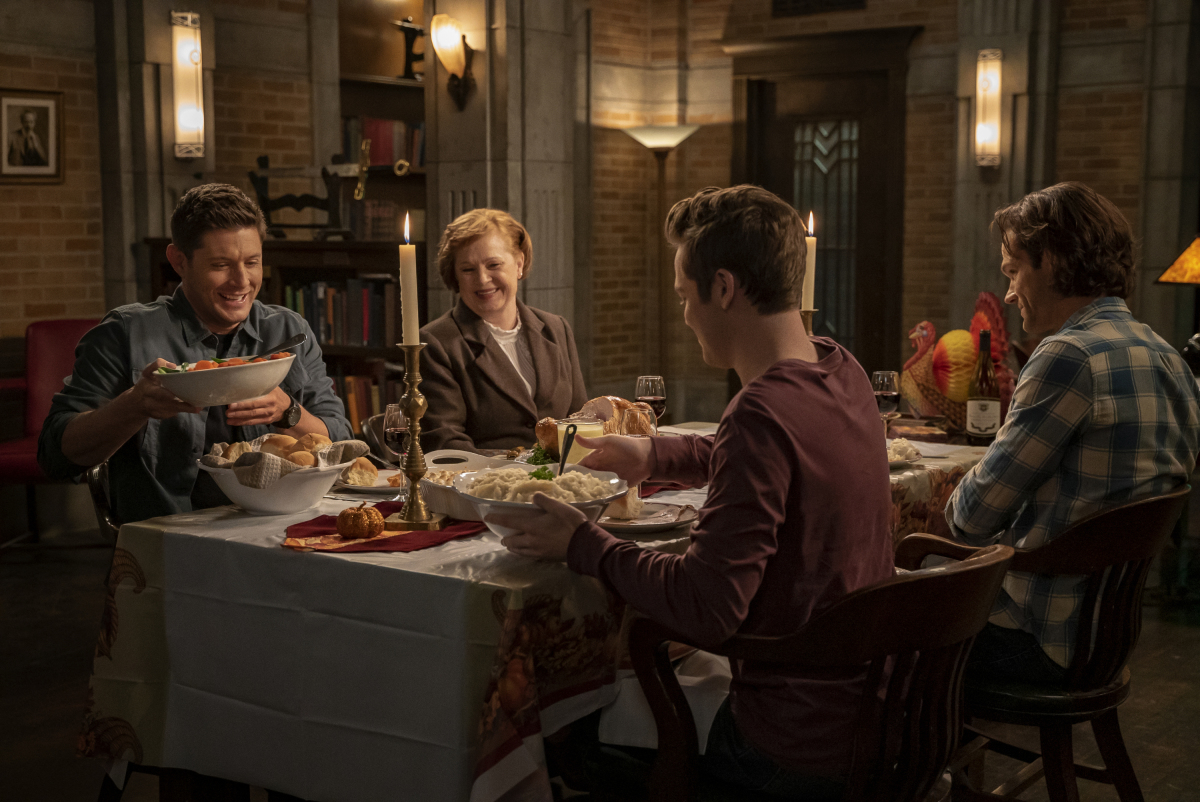 TVLINE | The first episode when you return is your holiday installment. What can you preview about what’s in store?
It’s a really fun episode, and it kind of touches on some heretofore unaddressed things about the Men of Letters and about the bunker, and then kind of allowed us to get into a fun episode that takes up a lot of stuff that I think fans, or certainly that we in the writers’ room, have wanted to see in terms of like, “What would a Thanksgiving dinner look like with our guys?” and things like that, and put it all together in something that we hope will be really, really enjoyable for the fans. It’s just really, really fun. As a way to come back into the story after, at that point, the last six, seven months, I think coming in with something a little lighter and enjoyable is going to be a really good appetizer for what’s to come, because what’s to come, let’s just say, it may not all be super fun.

TVLINE | When we last left off, things were really escalating in the fight against God. What will that look like in the last seven episodes?
There is no way to avoid this fight. Chuck’s gonna come back, they know what he’s going to do, they know what he wants, they know everything. And so what can they do to fight him? It’s really about rallying the troops and allies, some people we’ve met before, and some people we’ve sort of met in passing, and some people we haven’t ever seen, and using every tool, every arrow in their quiver, to fight this existential, literally God-like threat. So that becomes a lot of it, but as so many of these things do, ultimately, it’s gonna come down to Sam and Dean, two guys from Kansas, facing off against the Supreme Being. So they’re still the underdogs in that fight.

TVLINE | Can you talk about the emotional and psychological mindset of Dean and Sam in these final episodes, given everything that they’re going up against?
Neither one of them is giving up. That’s not in their character. I think you’ve got a Sam who wants to do this in a smart, considered [way like], “Let’s make a plan. Let’s go in with a blueprint,” and you’ve got a Dean who is a little bit more impulsive and a little bit more willing to do whatever it takes to bring Chuck down, because of everything Chuck has taken from him and from them. You have to realize, for our guys, they just had their entire world blown up, like everything they’ve done their whole lives. When you realize your life’s been a manipulation, what does that mean for you as a person? Who are you, really? And so for Sam and Dean, it’s about, “Who are we, really?” I think they know, but there is confusion just because of the circumstances. It is, to a degree, about finding themselves, and also kind of finding each other through our final episodes as they go up against the most powerful force in the universe. 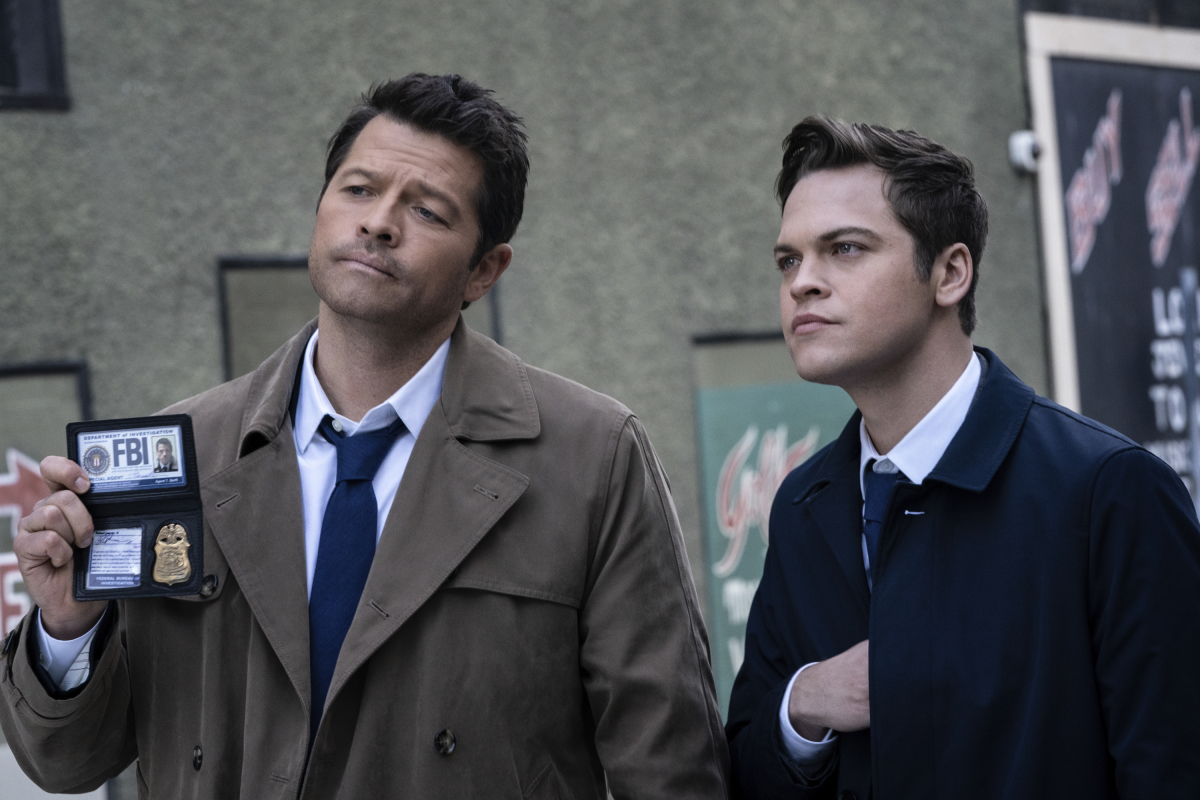 TVLINE | In the last episode, Jack got his soul back. Will that affect his ability to go up against God and fulfill his destiny to kill God?
It will. Jack is someone who’s now having the weight of everything he did land on him. In some ways, that’s good because he can finally deal with it. In some ways, it’s debilitating, as grief and depression and guilt often are. So from his point of view, yes, it’s kind of hard to deal with all of that, and it’s not an easy process for him, and it’s something where Sam and Dean, and Castiel more than [Sam and Dean] even, are there to guide him through this incredibly difficult process.

TVLINE | You’re also doing an episode that has flashbacks to a young Dean and Sam. What kind of insight will that provide? And why was that a story that you wanted to tell in these final hours?
Every year, there’d be some kind of flashback story. One of my first episodes was flashbacks of Sam and Dean in high school. It was something we used to do a lot, and we kind of moved away from [it] largely because the actors who we’d come to rely on to play Young Sam and Young Dean got too old. Colin Ford, right now, is older than Jared [Padalecki] was when the show started, I think. So it was something where we were talking about the types of episodes we wanted to do towards the end, and I put it out there like, “Look, if someone has a really great flashback episode, it’s been a while since we’ve told a story like that.” Meghan [Fitzmartin], one of the writers on the show, came in with an idea, and it worked for us. It worked not only as a case right now, but also as something that informed the journey Sam and Dean have taken, where they started as kids, how they kind of came together and then how that has [led up] to the point that they are, emotionally, when the episode airs. So it ended up being a really good reflection of our guys now, telling a story about our guys then, which, to me, are always the best versions of those types of flashback stories. 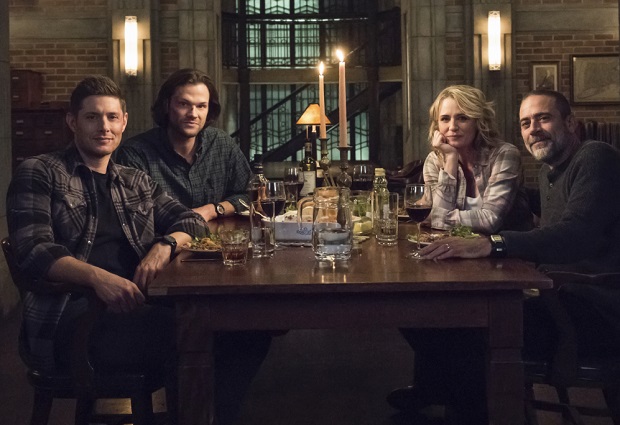 TVLINE | Was there anybody that you really wanted to get back for these final episodes, but it just didn’t work out for whatever reason, scheduling or because of COVID?
Look, COVID was limiting, especially when it came to the last two [episodes]. And there were certainly people we would have liked to have brought back like Samantha Smith, like Jeffrey Dean Morgan. People who have been such core parts of the show for so long. But unfortunately, because of COVID and some other things, doing a big supersized guest cast family reunion was just off the table. But in terms of our story that we’re telling, we didn’t have to make any compromises. Everyone who is coming back is coming back for a specific reason. These are people we want. They’re important to us. They’re great characters, and we just thought it was an opportunity to revisit some of our and, hopefully, the fan favorites.

Stayed tuned to TVLine for even more Supernatural scoop!