Ordered to series back in May of the year 2019, Fox’s NEXT (fka neXt) at long last made its debut on Tuesday night. Will you be tuning in for the… er, subsequent episode?

NEXT stars Fernanda Andrade (The First, Here and Now) as Shea Salazar, an FBI agent who puts a pin in a year-long trafficking investigation/imminent bust to look into the mysterious death of a father figure, Dr. Richard Weiss, who survived being T-boned by a car that (we saw) had been remotely “hacked” into, only to die at the hospital when an unseen “something” shut of all of his life support/monitoring devices.

Found in Weiss’ car was a note indicating that he was making a beeline for Paul LeBlanc (Mad Men‘s John Slattery), an Elon Musk-ian tech titan who years ago got forced out of his own company, Zava, by his brother, Ted (Ozark‘s Jason Butler Harner). Agent Salazar shows Paul a videotape that Dr. Weiss had made prior to his ill-fated drive, in which he relayed his suspicion that he is being watched/targeted. Weiss also shared a glimpse of some strange trace code he found, which Paul recognizes as his own — specifically, it’s from a “human-level” A.I. project, dubbed NEXT, that his company had been working on, but which he shuttered due to its potential for a self-perpetuating “intelligence explosion.”

Did Paul’s company dust off NEXT and unwittingly unleash it into the wild? Paul and Shea pay his old digs a visit, where he gets a chilly reception from his brother. Ted nonetheless obliges and leads Paul and Agent Salazar to the room where NEXT has been rebooted and now lives — though sealed off from any access to the Internet/outside world. As such, there is no way NEXT is behind the assorted shenanigans.

Paul confronts the machine, entering a two-word command that he claims will trigger a subroutine that will erase NEXT’s source code — something a superintelligent, self-preserving A.I. would resist. But NEXT proceeds to run the program… and nothing happens. Paul was bluffing, and NEXT out-hustled him.

Not helping Paul make his case are the harrowing hallucinations he has, resulting from a degenerative brain disorder that also prevents him from sleeping — and gives him about five more months left to live.

With help from her FBI office, Salazar gleans that one of the wonks working on NEXT was up to his eyeballs in gambling debt, and was tempted by a mysterious, lucrative offer to hook the A.I. up to a router (ugh). So yes, NEXT did get loose…. 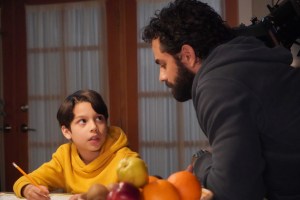 Also in the premiere episode:

* We meet Shea’s husband, Ty (The Haves and Have Nots‘ Gerardo Celasco), and son, Ethan (Mr. Robot‘s Evan Whitten), the latter of which is getting bullied at school — but who, last we see, has been tutored by the house’s Alexa-like ILIZA assistant to access the gun safe. Paul’s family, meanwhile, also includes his estranged daughter Abby (Jessica Jones‘ Elizabeth Cappuccino), from whom he sneaks a DNA sample to covertly ascertain if she inherited his brain disorder. 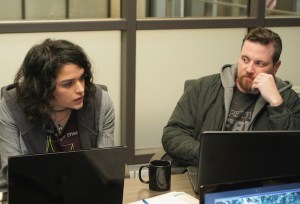 * Agent Salazar’s FBI team is comprised of Gina (Agents of S.H.I.E.L.D.‘s Eve Harlow), a high-strung cybercrime agent; straight-laced Ben (Disjointed’s Aaron Moten); and CM (Castle‘s Michael Mosley), an ex-con hacker (who was once worked with or was a  member of a white nationalist group).

* Speaking of the feds: As if Salazar’s supervisor wasn’t already fussy about her chasing this A.I. case, NEXT at one point targets her field office, dramatically wiping the computer hard drives of all the evidence and paperwork in her pending bust! She in turn yells at NEXT to give everything back, but it plays dumb.