Dancing With the Stars fans could breathe a sigh of relief on Monday night, for there would be no feline-themed performances that felt akin to a psychedelic trip. No Viennese waltzes performed to “Memory” from Cats, no foxtrots set to Katy Perry’s “Roar,” and, hopefully for the rest of Season 29, no velvet onesies for any reason whatsoever.

Now that Carole Baskin and Charles Oakley — arguably this cycle’s weakest contestants — have been eliminated, we’re left with a roster of amateurs who are anywhere from decent to very, very good. But the Top 13 performance show was still unlucky for one couple (and for the directors in the control room, apparently); before we get to Monday’s results, let’s recap the highs and lows of the evening:

BEST OF THE NIGHT
Skai Jackson and pro Alan Bersten (Foxtrot) — Skai’s foxtrot not only served as redemption for her last two so-so weeks, but it was a simply stunning tribute to her late Disney co-star, Cameron Boyce. Though Skai’s confidence has faltered before, she delivered every beat of Monday’s dance with such maturity, never once relying on Alan to do the heavy lifting. And speaking of lifts, that final twirl with Skai’s hands on Alan’s hips was so beautifully posed, she looked as though she belonged in a music box, spinning away as the music played. Judges’ Score: 28/30

BEST OF THE NIGHT (RUNNER-UP)… AND WORST INTERVIEW QUESTION FROM TYRA BANKS
Kaitlyn Bristowe and pro Artem Chigvintsev (Viennese Waltz) — Even if Kaitlyn’s performance hadn’t been incredibly elegant and self-assured — which it was! — her final back-bend pose across Artem’s knee was reason enough to push her up the leaderboard. The flexibility! That said, surely Tyra Banks already knew Kaitlyn was thinking about her boyfriend, Jason, during her routine… because her entire rehearsal package involved dedicating the dance to Jason. Judges’ Score: 25/30 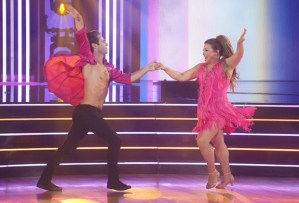 BEST EXCUSE TO REWATCH AN OLD ROUTINE
Justina Machado and pro Sasha Farber (Salsa, pictured) — Justina and Sasha’s performance was fire, but the soundtrack — Wisin’s “Que Viva la Vida” — was also used for Jordan Fisher’s trio dance with Lindsay Arnold and Corbin Bleu during Season 25, and now I’ll be rewatching that on a loop for the rest of the evening. As should you! Judges’ Score: 24/30

MOST IMPROVED
Nelly and pro Daniella Karagach (Paso Doble) — Hello, breakthrough! Daniella gave Nelly much more content to master in this paso doble, which automatically elevated his performance. But now that his footwork is getting more confident, Nelly needs to work on his face, which is pulling all kinds of odd expressions — likely without him even realizing it — during each routine. Tyra, give this man some smizing tips. Judges’ Score: 21/30

WORST OF THE NIGHT
Jesse Metcalfe and pro Sharna Burgess (Cha-Cha) — If we’re looking at chemistry alone, Jesse and Sharna would sit atop the leaderboard every week. (That blink-and-you’ll-miss-it cheek kiss was precious, no?) But despite his smoldering expression and obvious commitment in rehearsals, Jesse has been so heavy-footed in most of his performances, and he seems to be overthinking every single step. Frankly, I’m not convinced he’s having any real fun out there, and that’s taking the enjoyment out of watching his journey. Judges’ Score: 21/30

COUPLES IN JEOPARDY
Anne Heche and pro Keo Motsepe
Vernon Davis and pro Peta Murgatroyd — wait, not them.
— wait, not them either!
Monica Aldama and pro Val Chmerkovskiy

Due to “an error in the control room,” per Tyra, Monica and Val had already been announced as safe. Then, as Anne, Chrishell and Vernon — the only three contestants left on the dance floor — waited to hear the names of the bottom two, Tyra revealed that Chrishell and Vernon were both safe, and Monica was actually in danger alongside Anne. (Say what you will about Tyra’s hosting performance, but I thought she recovered from this nicely.)

Your turn! How do you feel about Anne and Keo’s elimination? And which remaining couples impressed you on Monday? Tell us below!