Warning: The following contains spoilers for The Boys Season 2, Episode 7. Proceed at your own risk!

Starlight’s favorite candy bar became the new Chekhov’s gun during The Boys‘ penultimate Season 2 episode, when the sweet treat reappeared for the ultimate takedown. After Starlight found herself in Black Noir’s clutches, Queen Maeve rescued her by… feeding Black Noir an Almond Joy?! Turns out the supe has a severe tree nut allergy, Maeve explained after Black Noir collapsed. But given what a cheeky delight Noir has become, he has to be OK, right?!

TVLine went to executive producer Eric Kripke for answers on Black Noir’s condition and the story behind his surprising kryptonite. Plus, the EP reveals how Fringe fave John Noble became Butcher’s dad and teases why viewers should be concerned ahead of next Friday’s season finale. (Believe it or not, there’s something even more worrisome than the many exploding heads at the end of this week’s episode.)

TVLINE | Where did the idea for the Almond Joy takedown come from?
The actors and I were at Comic-Con promoting Season 1, and that was where I learned that Nathan Mitchell, the actor who plays Black Noir, has a super severe nut allergy. Like one of those people who can’t be in the same room with nuts, like a vampire with garlic. Karl [Urban] turns to me, laughing, and he says, “You know, we should give that weakness to Black Noir,” and I just thought that was brilliant. When you think of superhero kryptonite, you think of things like kryptonite. Like it takes a space rock, something very, very exotic. I was just tickled by the idea that someone as strong and powerful as Noir could be taken out by something so simple and something that so many people suffer from. It’s a very common kryptonite, tree nuts. So it was fun. If you look at Episode 4 — just because I love that we are always planting in these little Easter eggs that make more sense on a second viewing — he goes down into crime analytics and Anika, the computer tech, is eating an Almond Joy, and his very first move is to hold out that garbage can like, “You throw that sh-t away.” So I love that we set it up as early as Episode 4.

TVLINE | I forgot about that scene, but I remembered that was Starlight’s favorite candy bar.
Yeah, exactly. It’s also Starlight, symbolically, [who] is able to take him down with something that she loves.

TVLINE | What can you say about his condition after this episode?
I won’t give too much away, but he’s pretty laid low. There isn’t gonna be too much more Noir for the rest of the season.

TVLINE | He has become more of a character, a cheeky presence, this season. Was that in response to him becoming a fan favorite and people wondering what he was up to last season?
People love that guy… Nathan is amazing. He’s so specific with his body motion, and a big reason Noir is so successful is because of him. It’s just a fascinating psychological experiment to me, because obviously his expression never changes. I mean, never. And yet, I always hear from people like, “He was so funny in this scene, and he was so sad in that scene. He was so scary in that scene.” It’s the same face! Nothing’s changing. [Laughs] People project their own feelings onto his face, which is a reason why I think they connect with him so much. 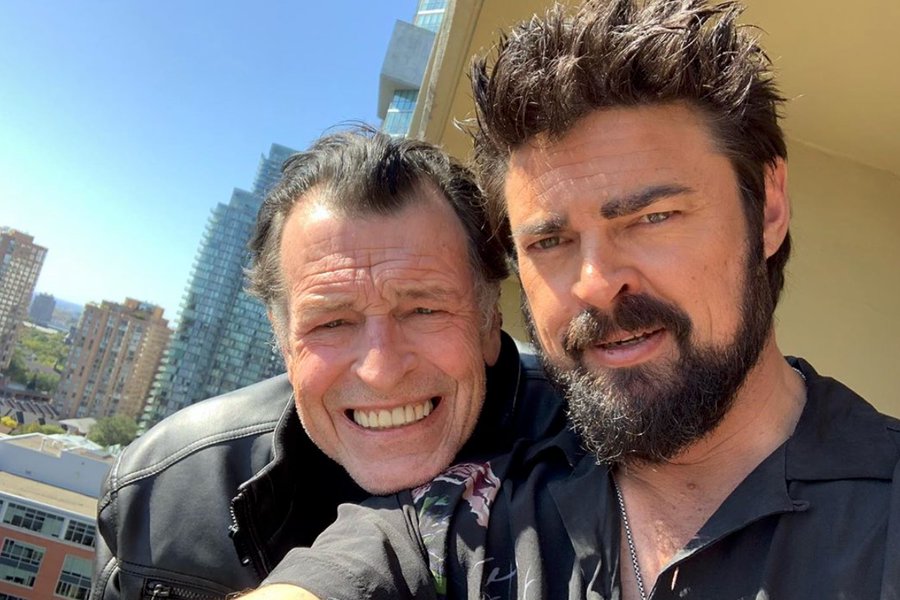 TVLINE | When I was watching this episode for the first time, I was delightfully surprised to see John Noble as Butcher’s dad. How did that casting come about?
It’s a very tricky thing, casting Butcher’s dad, because he looms so large in Billy’s life. So you need to cast an actor with the weight and the stature to fill his dad’s shoes and [who] can go toe-to-toe with Butcher. It’s hard to find an actor that’ll do that for one scene in one episode of a show. We went through a list of actors of that caliber, and John Noble immediately jumped out at us. One, I’m a crazy fan of his. He’s so good. And two, I’d be lying if I didn’t admit that we were hoping that he felt a little Lord of the Rings nepotism towards Karl [who also co-starred in LotR] and would be more likely to say yes to flying in all the way to Toronto and taking time out of his busy schedule for one scene. I thought, “He’s friends with Karl, so maybe that makes our odds a little better.” I think it worked, because he’s a lovely man, and he loves Karl, and Karl was thrilled to reunite with him.

TVLINE | Finally, I know there’s not a lot that you can say about the end of this episode, and what it means. But how does it set you up for the season finale? What can you tease?
I think Episode 8 is gonna be a real sh-t fight. For what it’s worth, I think Episode 8 is my all-time favorite episode of the whole show, both seasons. It puts, primarily, Butcher in a really dangerous place, because he has this devil on his shoulder, who is his father, and he’s just learned at the end of this episode that there’s no value in doing things the right way by going through the right legal means. The only way to get things done apparently is to be the worst possible person like his father, and he’s heading into Episode 8 with that attitude. We should very rightfully worry about Butcher’s humanity and what that means for the rest of the team.