Warning: The following contains spoilers for Emily in Paris‘ finale. Proceed at your own risk!

Oh la la, Emily in Paris‘ season concluded with quite a torturous cliffhanger for fans of the “will they or won’t they?” relationship between the titular heroine and her handsome neighbor Gabriel.

Let’s briefly recap: Realizing that his best chance at opening his own restaurant was in Normandy, Gabriel announced that he was moving — and soon! Since his girlfriend Cami wasn’t about to leave her life in Paris, that meant the couple was officially broken up. Emily, too, was shocked by Gabriel’s big move, but at the same time, she was happy for her friend and his new venture. The pair said their awkward goodbyes, but that wasn’t how Emily wanted to leave things with Gabriel, so she rushed back to the restaurant where he works and the two passionately kissed, before taking things to the bedroom. As they lay in his bed, Gabriel noted that Normandy is not that far away.

“It’s not that I can never see you again. It’s just that I don’t think I should ever see you again,” Emily replied. After all, Cami is also her friend. “We’d both be hurting someone that we care about a lot.” 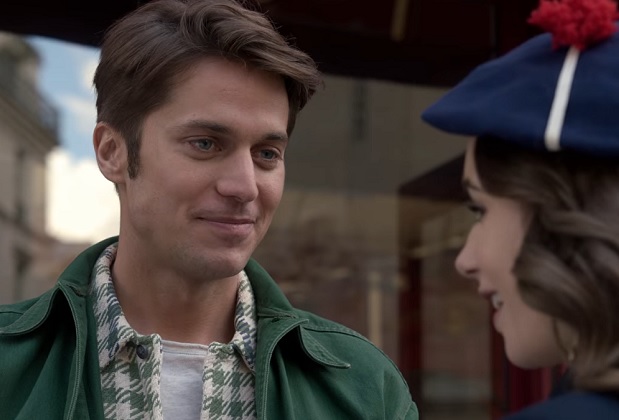 The next day, Emily found Gabriel back at the restaurant instead of on his way to Normandy. Surprise! He’s buying the Parisian restaurant, with the help of Antoine’s financing. The happy moment was then broken up by a potentially troublesome text from Cami to Emily: “I just heard from Gabriel. He’s staying in Paris. Can we talk??”

So what does the message mean?! “Nothing is sort of exactly as it seems to [Emily],” creator Darren Star cryptically hints, “and I think a lot of her ideas about life are constantly tested. And they will be next season, as well.” (The show’s Season 2 fate is To Be Determined, for the record.)

As for Gabriel’s decision to stay, his feelings for Emily are at the forefront of his mind and his choice. “I think Emily gave him purpose again, and he had enough strength around her that he felt like he could go further with his restaurant project and actually make it happen, [whereas] he didn’t have that strength before with Camille,” Lucas Bravo, who plays the chef, tells TVLine. “Based on that, he sees Emily as his pillar, his main inspiration, his strength.”

So when Antoine offers to help Gabriel, “he’s just like, ‘OK, planets are aligned,'” Bravo continues. “And she’s also the reason why he knows [Antoine]. She’s the reason why he’s going to have another opportunity, and she’s connected to everything that is happening. So she’s, obviously, the main reason he’s so happy about staying.”

Meanwhile, Emily is both “deeply conflicted” and “really excited” following Gabriel’s big news, star Lily Collins describes. “She’s now more confused than ever, because Cami and her have created this real bond, and she is all about her girlfriends. But at the same time, he’s been the [constant] throughout her experience so far, being supportive and being a friend, but also something a little bit more.”

So what does the future hold for the would-be couple, should the series get renewed? “What happens in the next chapter, I think, can be a real exploration of how does the relationship between these three characters evolve,” Star previews. “That, to me, is such a fun thing to explore in Season 2, because these are not Americans. They’re French people. To me, a big part of the show is looking at everything through a different lens. Season 2 will open up some interesting and surprising relationship avenues.” 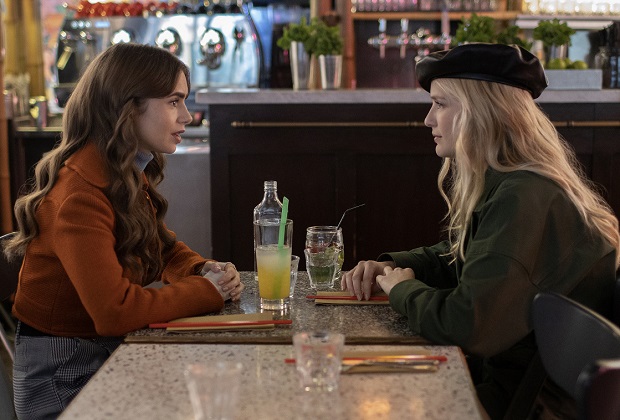 Plus, there’s the issue of if Emily and Gabriel pursue a relationship, are they doing something wrong, especially in light of the fact that their attraction began — and a kiss transpired — while Gabriel was still dating Cami? “I think it’s really sticky,” Collins admits. “I’d probably steer clear of that, because there’s obviously been so much going on with Gabriel and Cami’s relationship. When you go to the Loire Valley and see the family and how they all interact, there’s such a deep history there. I would just let things settle.”

For his part, Bravo believes Emily and Gabriel are “definitely not in the good, this is wrong, but this is also exciting,” he says. “I think they’re both kind of lost. She’s lost in Paris, and he’s lost in his feelings. So that’s what happens, I guess, when two lost people find each other.”

And Gabriel isn’t the only man pursuing Emily in the French capital: Thinking that Gabriel had already left for Normandy, Emily agreed to go to Saint-Tropez with fashion exec Mathieu. But never fear, because as Collins puts it, “I don’t see them being a great match. I see that as more of a distraction.”

What did you think of the Emily in Paris finale? Are you rooting for Emily and Gabriel? Grade the episode below, then hit the comments!