HBO Max’s Raised by Wolves with its freshman finale steered multiple storylines into a dramatic turn, while also planting several seeds for the sci-fi series’ second season (which was greenlit in mid-September).

First and foremost, there was the matter of expectant Mother. After Father landed the pod in a familiar forest, she aimed to kick back and recharge, while Sue monitored her amniotic fluid for signs of gestation/imminent birth. Along the way, Mother and Father got into it a bit, as she sensed he was “jealous” of the child she was carrying — or at least curious as to the how and by whom/what. She in turn told the tale of conception, with a spiel that would steam up the pages of Penthouse‘s Android Forum. Father, learning that Mother had access to archived memories of her creator that he did not and hearing of how Campion Sturges implanted inside her… the know-how to conceive a child of her own… declared himself melodramatically “angry” — to a point that he plans to have his memory drive wiped of their years together and the android love he feels.

Mother in turn sought clarity on the mission that apparently is the life inside of her. That led her to a cave where she stumbled across the pentagonal stone she had earlier had visions of — as well as the long-defunct, goop-spitting head that once swiveled atop it. No sooner does she begin to dust off this artifact does she go into violent labor, alone. And though for a hot second her belly flattened, suggesting the weirdest phantom pregnancy ever, the birth process resumed, with an eel-like creature wriggling out of its host’s maw. The flying (!) offspring eyeballed Mother for a bit before lunging at her… to be sweetly nursed. 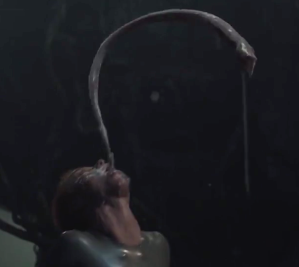 Exiting the cave and cradling her nursing spawn, a sheepish Mother tried to at first hide from Father, but the jig was up. Resolved to destroy the creature, but with Mother in a weakened state, Father volunteered to pilot the three of them, inside the pod, down into the pit and to a certain death. Thing is, though Mother and Father seemed to melt as the vessel careened closer and closer to — and then into! — the planet’s hot, magma core, we later saw that the pod zipped straight on through, spitting out into a tunnel that led to the planet’s other side. Now amazingly none the worse for wear, Father pushed Mother out the back hatch, into the sky, and then followed her out, leaving the snake-like creature alone in the pod. Toward episode’s end, we saw that the pod had crash-landed — after which the snake, now mega-sized, burst out of its metallic confines and slither-flew off into the distance.

Elsewhere in the Season 1 finale:

* Prior to the considerable childbirth drama, Mother was standing at the rim of the pit when one of the cloaked figures from her visions sneaked up her — though she spun around and thwarted its attack, then fatally jabbed it with her fist for good measure. She and Father examined the creature and the cro-magnon skull it was lugging around, surmising that the creatures were not evolving into humans, as they always speculated, but that humans long ago had set foot on this planet and had devolved into creatures! 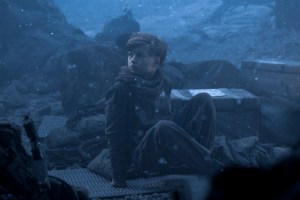 * Chasing after Mouse at one point, Paul drifted into a strange cave, where he found primitive drawings (including a snake-like thing) and then seemed to fall into a trance. When he later resurfaced at camp, he first sought to sabotage the pod, before blindsiding Sue with his knowledge — via Sol?! — that she is not his mom, but that she and “Marcus” stole his dead parents’ faces! Apoplectic, Paul fired a blaster at Sue, wounding her in the abdomen. 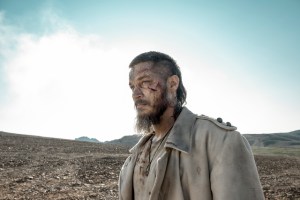 * Marcus spent his few finale scenes drifting around, hallucinating, foreheads veins a-bulging… and eventually running into a new band of atheist soldiers. He dispatched with all but one of them quite handily, then invited the one he spared to pray with him, as we saw this new group’s own massive ark motor past in the sky above.

What did you think of “The Beginning” and Season 1 as a whole?