For the first time ever on its U.S. edition, the reality series sent a whopping three houseguests to the jury in a two-hour triple eviction episode. And though it seemed inevitable that the Committee would dominate play on Thursday and leave only their alliance standing by the end, Big Brother‘s double (and now triple!) eviction episodes have provided some of the show’s biggest surprises in the past… and the Committee has been threatening to implode this week, anyway.

Did any of the non-Committee members — Kevin, David or Enzo — manage to survive Thursday’s exodus? Read on for the highlights of the episode:

EVICTION NO. 1 | After the veto ceremony, Cody is still completely flabbergasted as to why David would take $10,000 instead of going for the veto win, and when Kevin clears the air with Cody from their awkward pre-nomination argument, Cody seems even more interested in potentially evicting David, after all. But the Kevin vs. David debate goes on the back burner after an unnerving visit from new neighbor Dr. Will, who cryptically hints that the houseguests must think “not one, not two, but three steps ahead.”

Memphis is the first to suggest that Dr. Will is teasing a triple eviction, and as soon as the other houseguests buy into that theory, they all start to look like they’ve gone to the bathroom in their pants. (It actually brings me some glee to see Cody, Dani, Nicole and the rest of the Committee actually looking nervous for the first time all season.) But for the time being, Julie Chen Moonves will only confirm to the houseguests that a double eviction is happening, and Kevin is the first to go by a vote of 6-0. “Let’s hug on finale night!” he tells his fellow players as he makes a swift exit, later explaining to Julie that any post-eviction hugs he gave would have just been fake. 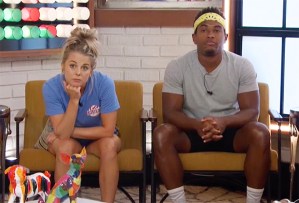 EVICTION NO. 2 | Next up, it’s the first Head of Household competition of the night, in which players must answer true/false questions about Dr. Will’s visits from the neighbor’s house. Enzo, Christmas and Memphis all reach the final question, and Memphis gets it correct for the win — and after seemingly strategizing with no one during the commercial break, he nominates David and Nicole.

In the Power of Veto competition, the six players — one of which is finally Christmas, surely to her delight — must cross a balance beam, complete a puzzle on the other side, then go back across the beam and ring their buzzer to win; anyone who falls off their beam is automatically eliminated. Christmas is first to ring in, but her puzzle isn’t correct. She goes back to fix it quickly, and when she’s making her second return trip to the buzzer, Nicole is doing the same — but even though Nicole rings in first by a hair, Nicole’s puzzle isn’t complete, making Christmas the veto winner. And after some frantic discussions with Nicole and Memphis, Christmas chooses not to use the veto, explaining that the game is too turbulent right now to wield so much power if it isn’t completely necessary.

And then, in a truly hilarious plot twist, the houseguests spot the enormous “TRIPLE EVICTION” banner floating on the screens behind Julie’s head, and every jaw drops simultaneously as they realize what the night might actually entail. (Julie’s response to the chaos is a simple, “Hello,” with absolutely no acknowledgment of the triple eviction, which makes the moment even better.) Anyway, it’s time for the second eviction, and David is ousted by a vote of 3-2. (Christmas and Tyler are the votes against Nicole.) 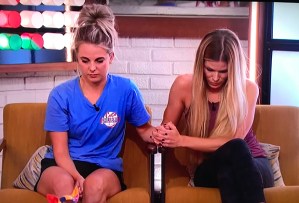 EVICTION NO. 3 | Fortunately, Julie’s able to salvage some of the triple eviction surprise: The houseguests aren’t all that shocked to hear a third player will be leaving, but they are stunned to learn that a whole ‘nother week of competitions will unfold on live TV in the next hour. And first up, it’s Head of Household! Again! This time, players must answer true/false questions about events that happened in the house earlier this season. It comes down to Christmas, Cody and Tyler, and Tyler snags the win — and despite both ladies’ best, last-ditch efforts to stay off the block, Tyler nominates both Dani and Nicole for eviction.

The second Power of Veto competition is similar to the first one, except players must now carry their puzzle pieces across the balance beam, one at a time, then recreate the puzzle on the other side, head back across the beam and hit the buzzer. Both Christmas and Nicole are eliminated when they fall off their beams, and Tyler ends up scoring his second competition win in a row. Shocking no one (least of all Dani), he decides not to use the Power of Veto, leaving his nominations in tact.

Dani gives a solid pre-eviction speech, calling out Tyler and Christmas for their Final Two deal and confirming that she’ll only target those two players if she stays in the house. But it’s not enough: Dani is evicted by a vote of 4-0 — even Cody decides to get her out! — and she conspicuously hugs everybody except for Christmas on her way out the door. “I guess it’s going to be personal,” Christmas comments. “Huh, I guess it is!” Dani mocks as the door closes, and suddenly, I’m back to loving this complete mess of a season.

With that, I hand it over to you! What are your thoughts on those triple eviction results? And with only six All-Stars left, who are you rooting for to win the whole thing? Tell us below!