A small town’s Christmas is at risk of getting Scrooged over by Christine Baranski — unless an angelic Dolly Parton can stop it — in an upcoming Netflix holiday movie musical.

Netflix has announced a Sunday, Nov. 22 release date for Dolly Parton’s Christmas on the Square, which is directed and choreographed by three-time Emmy winner Debbie Allen and features 14 original songs by Parton herself.

The movie follows Regina Fuller (The Good Fight‘s Baranski), a rich and nasty woman who returns to her small hometown of Fullerville after her father’s death to evict everyone and sell the land to a mall developer, right before Christmas. But after listening to stories of the local townsfolk, reconnecting with an old love (Everwood‘s Treat Williams), and accepting the guidance of an actual angel (played by Parton), Regina — SPOILER ALERT unless you have ever seen any Christmas movie ever! — starts to have a change of heart.

Parton’s angel, named Angel, is described as “made of blonde hair, white chiffon, light and love,” while Williams’ Carl is the proprietor of the square’s General Store, who hopes to bring Fullerville back to its former glory.

Rounding out the cast are Jenifer Lewis (black-ish) as Margeline, a spitfire of a beauty shop owner who is the closest thing Regina has to a friend; Josh Segarra (Arrow) as Christian Hathaway, a pastor who is married to the love of his life, Jenna (Dolly Parton’s Coat of Many Colors‘ Mary Lane Haskell), and leads the town’s resistance against Regina’s plans; Jeanine Mason (Roswell, New Mexico) as Felicity, an angel-in-training who needs to “earn her wings”; Matthew Johnson (Alvin Ailey American Dance Theater) as Mack, a single father who owns the town bar; and Selah Kimbro Jones (Star) as Mack’s daughter Violet.

Check out the poster below: 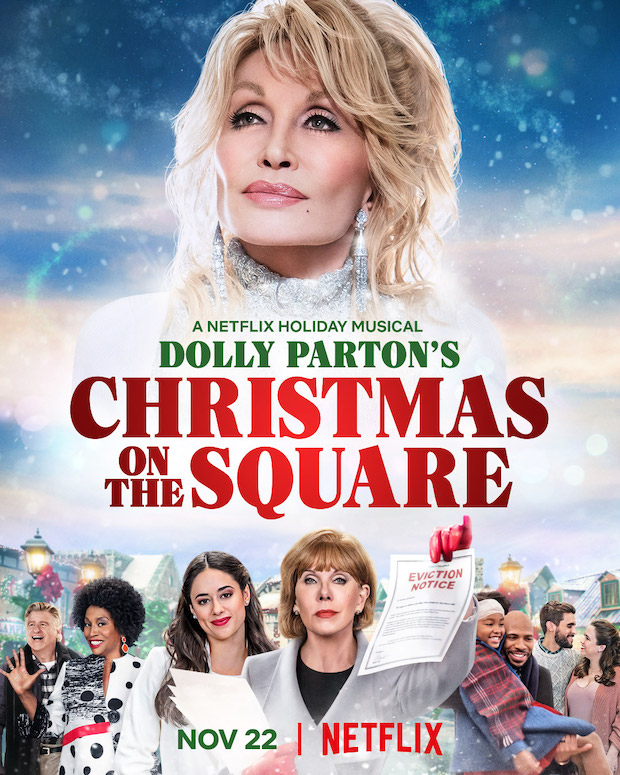