Warning: The following contains spoilers for The Boys Season 2, Episode 6. Proceed at your own risk!

Oh, Frenchie boy, let us give you a hug. Last Friday’s The Boys gave us a double dose of the lovable scoundrel as flashbacks and a present-day confrontation with Lamplighter revealed just how much Frenchie has been blaming himself for the deaths of Mallory’s grandkids.

On that fateful night, Mallory tasked Frenchie with keeping an eye on Lamplighter, but Frenchie was forced to slip away to save his friend from overdosing. Lamplighter — who was being blackmailed by Mallory into spying on Vought — took advantage of the lack of surveillance and killed the children, thinking it was Mallory in the bed, the remorseful supe confessed. Similarly, Frenchie was still punishing himself for the tragedy, too. Recognizing that he had been trying to save Kimiko to make up for his own sins, Frenchie apologized and told her that he would leave her alone now.

Below, star Tomer Capone talks about Frenchie’s big episode, his relationship with Kimiko and that giant penis fight sequence, courtesy of Love Sausage (because this is The Boys, after all).

TVLINE | On top of all the Frenchie flashbacks, you’ve got his backstory coming back to haunt Frenchie in the present, and the “patients take over the asylum” scenario. What was the experience of shooting this episode like for you?
I remember freaking out when I read the episode. I was so happy for Frenchie. Right away, an image came to my mind: a picture I saw when we shot Season 1. … In the comic book, the original background for him is so crazy. It’s like Frenchie’s father gets killed from a baguette. It’s all over the place… But I remembered I saw a picture from the flashbacks in the comic book, and Frenchie had blond hair. So immediately when I read flashbacks on the show, I went to [showrunner] Eric Kripke and showed him the picture and said, “Please, please, can I change my hair? Can we do something with it?” and he was so into that and happy to go with it. So that was like the first thing, and it got me so excited about jumping into Frenchie’s backstory, which I think, in the show, went for something more realistic and more traumatic and more effective in terms of what happened with the world of The Boys. 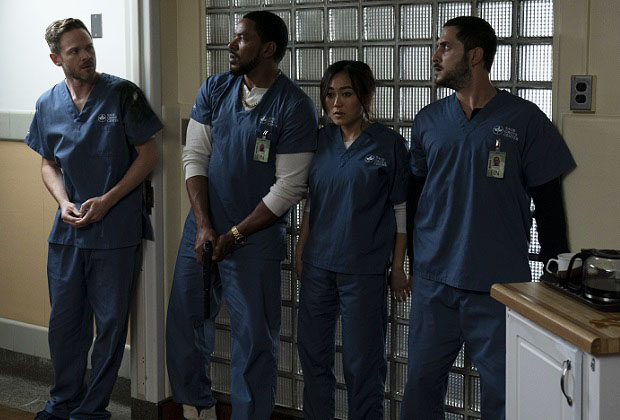 Even when we shot Season 1, and we got some hints and clues about The Boys’ history with Mallory’s grandchildren, it was so hinted and not specific, and I remember, again, going to Kripke and asking him about it, and he had all the answers. He already knew what he was telling with those characters and where to take them. And to see that happening in Season 2, like reading the stuff he was giving me information about already in Season 1, it already was bubbling inside me, the whole experience, the trauma from taking responsibility and feeling ashamed. It’s redemption, that’s what he’s looking for. And I love that story of Lamplighter, where at the end of the day, both thought the other guy was the one who brought hell on them, and in the end, you find out that both of them were in the same hell, though they are superhero and one of The Boys. It says a lot about human beings [and] perception.

TVLINE | This is a really big, emotional breakthrough for Frenchie to finally share what happened and recognize this punishment that he’s been putting on himself. How does it change him moving forward?
I think that Frenchie, from Season 1, you see a character that is — well, hopefully — that is haunted by his past, by his traumas, and all he’s trying to do is run away as fast as he can from dealing with this stuff he carries. Episode 6 definitely, literally, closed Frenchie and his traumas and his past in one room and pushed him to deal with it. There was nowhere to run. It feels like it’s in one episode, and it happens really fast. I think that is the key for Frenchie to open the door to his real self and and not walk around with guilt. I always pitch Frenchie as a messed up kid, as the outsider, as the troubled teenager. I think that, in a way, Episode 6 makes him grow. It’s like growing pains, you say in English.

TVLINE | Yeah, he kind of becomes more of an adult after this.
Yeah. Even with Kimiko, I think that until Episode 6 or maybe Episode 5, Frenchie is desperate to bring his energy, his attention, his caring [to] someone else. He always wants to redeem something and, unconsciously, what he did was try to save Kimiko the whole time. In Episode 6, he realizes that it’s not the answer The answer is not trying to save someone else. The answer is trying to save yourself and redeem yourself, and then you can help someone else. So it’s a really, really, really beautiful episode, and yeah, emotional.

[And there’s a] big penis fight scene, which is, I think, the first ever genitalia action scene. [Laughs] It gets so emotional and then a minute after, something’s come through the window! I was so emotional when we shot those scenes. My beautiful friend Laz Alonzo, who plays Mother’s Milk, he always has new ideas for his friend Frenchie. Laz came into the trailer one day, and me and Karl [Urban] read Episode 6, and we asked Laz if he read Episode 6 and does he know about the fight scene with the large whatever, and Laz thought we were kidding him. He thought it’s a joke. He thought we were pranking him. He only read his lines, and then he went back and read it and came back to the trailer, and he was choking from, already in the makeup trailer before the scene, just from knowing what he’s going to do. On the set, I was very emotional, and Laz took advantage of it. He said, “Well, if I’m fighting this thing around my neck, I need someone to help me,” and he pitched it our director, he said, “Maybe Frenchie can bite it off.” [Laughs] And I was so emotional after my scene that I’m like, “I’ll do anything for my friend. Anything!” and I just went for it. The problem is I tore it apart, and they couldn’t use the footage.

TVLINE | That explains it. I was thinking, “Wait, I don’t remember this happening in the episode.” So there was a prosthetic then.
Yeah, there was only one.

TVLINE | I wasn’t sure if it was CGI.
If they thought ever that it would be CGI, I’m sure that Kripke and the rest of the cast, they would just protest and say, “No, no, no. We need a real real one.”

TVLINE | I guess after making an entire whale, a prosthetic penis was like no big deal.
[Laughs] I guess so.

TVLINE | Props department was like, “Easy peasy. We got this.”
[Laughs] 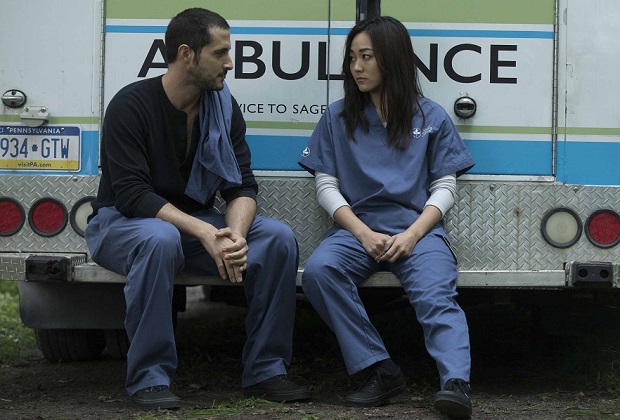 TVLINE | There’s this really beautiful moment where Frenchie says to Kimiko something like, “I can’t use you to absolve my sins. I’m gonna let you go now.” How do you think that moment changes their relationship?
I think that moment changes in a way that, first of all, is releasing Kimiko to find her own self, which is very interesting. And it sends Frenchie to now ask a bigger question than, “What was he fighting for? And who is he fighting for?” They’re equals now. After Episode 6, they’re both looking eye-to-eye to each other. … You’re gonna have to wait and see. Maybe it makes them stronger, maybe it makes them weaker.

TVLINE | I spoke to Karen Fukuhara about their relationship, and I wanted to get your take on this: He calls Kimiko “my heart” in French, which is very affectionate. How would you categorize their relationship? Is it platonic? Is it romantic? Where does it fall?
It’s all together. It’s a soul connection, that’s for sure. And “mon coeur,” I say that Frenchie’s mother, that’s the way she referred to him. That was her nickname for him. So that’s how he calls Kimiko. I think this is the thing that is so beautiful about this relationship, and we get so much feedback from the fans, and we love it, because that’s exactly what me and Karen are talking about when we’re working, each and every scene, about how to dissolve all aspects of romance or family. Keep it clean as much as we can get and try to refine it to our soul level connection, which is something that is charming, and I hope that is something that translates to the audience. And I know it [does], because we get so much affection for it, for this beautiful relationship.

The Boys fans, grade Frenchie’s big episode below, then hit the comments!