A gang war is brewing as Fargo kicks off its fourth season on FX with an epically ambitious, nearly three-hour (!) premiere — and a very odd arrangement may be the only thing preventing bloodshed.

We meet teen Ethelrida (E’myri Crutchfield) in 1950 Kansas City as she’s hauled into the principal’s office for punishment, a la Raising Arizona‘s H.I. McDunnough. She gets us up to speed with a history report on the city’s criminal underground: Back in 1900, the Jewish crime syndicate brokered a deal with the Irish mob, trading each other their sons in an attempt to keep the peace. But it doesn’t last. The Irish kid sneaks his family in so they can gun down the Jewish gang in an ambush, and his dad hands the kid a pistol to finish off the Jewish son: “It’s time for bears to be bears.” Years later, the Irish gang strikes a similar deal with the Italians, and this time, the Irish boy helps the Italians murder his family, firing the final bullet to kill his own father himself. 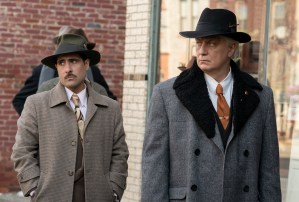 That catches us up to 1950, where the Italians — with patriarch Donatello Fadda (Tommaso Ragno) flanked by son Josto (Jason Schwartzman) and “Rabbi Milligan” (the murderous kid from the flashbacks, now played by Ben Whishaw) — meet a new rival: Loy Cannon (Chris Rock) and his African American crime family. Donatello and Loy size each other up, and when Donatello spits in his hand and offers a handshake, Loy pulls out a knife instead. He slices his palm so their handshake becomes a blood oath, and Donatello follows suit, with drops of their blood dripping onto the snowy ground. (Yep, this is Fargo, alright.) They trade sons, with Loy warning his boy Satchel: “If there’s trouble, swing for the balls, then the eyes.” 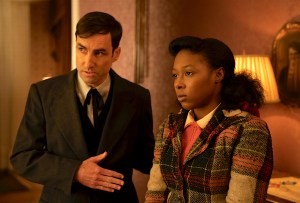 Ethelrida’s family runs a funeral home, with her white dad handling white funerals and her Black mom handling “colored” ones. At one funeral, she runs into Oraetta Mayflower (Jessie Buckley), a drug-sniffing nurse with a thick Minnesota accent and a rather blunt manner of speaking. (“Your mother must be quite dark-skinned,” she tells Ethelrida with a grin.) Plus, Ethelrida spots Loy Cannon sitting at her family’s kitchen table one night, so she knows something’s not quite right. And the peace between Loy’s crew and the Faddas is shaky at best: Loy warns Donatello that if they start killing kids, “you’ve got more than me,” while Josto prods his father to go on the attack against those “animals.” (“We’re the goddamn Roman Empire. They were born in huts.”)

The tension is thick as Donatello and Josto’s car stops at a street crossing, with Donatello’s men readying their weapons as they spot a Black man reaching into his coat. (The kids firing off cap guns nearby aren’t helping, either.) The Black man was just getting his cigarettes, but Donatello is suddenly in medical distress, seemingly having a heart attack… before he breaks wind in spectacularly loud fashion. (Hey, is this an homage to the Coen brothers, or the Farrelly brothers?) But soon, Donatello does take a bullet to the neck from an unseen assailant, and Josto rushes him to a fancy hospital, where they’re turned away by a snooty administrator who says they “serve only a certain class of people.” As they leave, Josto angrily tells the guy, “You and me are gonna dance again later” — and we believe him.

While Loy and his right-hand man Doctor Senator get turned away at a white bank while pitching their latest business innovation — Loy invented the credit card! And they don’t even want it! — Donatello ends up at Oraetta’s hospital after losing a lot of blood, with his sons keeping vigil. Josto hits up Oraetta for some “bennies” or “zoomers” to lift his spirits (“I’ve had a world-class day”), and they end up doing lines together, with Josto asking her to take care of his dad, because he’s in a lot of pain. Oraetta responds with a smile… but one that makes us worry a little bit, too. 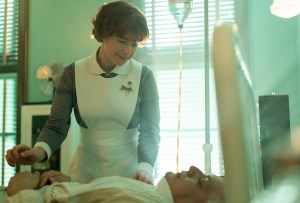 We were right to worry, it turns out. Oraetta checks in on Donatello late at night while his bodyguard is asleep, adjusting his IV and surprising him by speaking fluent Italian. (“I’m a people person, don’tcha know?”) Donatello starts to struggle, and Oraetta reassures him that “it won’t be much longer now.” Uh-oh. He calls her a “murderess,” but it’s no use. He passes away… and Oraetta takes off his ring, keeping it for herself. What the heck kind of nurse is she, anyway? She takes the bus home, and we see she lives across the street from Ethelrida, staring at the girl’s font porch from her window with an icy glare.

Sunday’s second episode introduces Josto’s beefy brother Gaetano (Salvatore Esposito), fresh off the boat from Italy and eager to take control of the family business, as well as Ethelrida’s aunt Zelmare (Karen Aldridge), who shows up on her family’s doorstep with a pal after they escape from prison, in another Raising Arizona nod. The Faddas try to gun down that snooty hospital administrator, but they miss and kill an innocent woman instead, and we learn they have an OCD-addled detective (Jack Huston) on the payroll snooping around for them. Plus, Oreatta gets fired when a doctor catches her nearly killing another patient, and she bakes an ipecac-laced apple pie for Ethelrida’s family; Gaetano and the Faddas have a tense standoff with Loy’s henchmen over a disputed slaughterhouse; and Timothy Olyphant shows up as a U.S. marshal who kicks down the front door of Ethelrida’s family home just as the episode ends. Anybody else feel like they should be taking notes?

Give the Fargo season premiere a grade in our poll, and then hit the comments to share your thoughts.