You can tell a lot about a person by how they keep their car. Bob’s Burgers in its Season 11 premiere ventures deep into Bob’s subconscious, where the hunt for a missing key in his automobile turns into a quest for self-love and acceptance.

We open on Bob, Teddy, and Linda in the diner. Bob makes even shuffling through the mail a self-deprecating activity. There’s a past-due bill and a coupon for 20 percent off an oil change. “We’re probably supposed to be getting those,” he muses under his mustache. An innocent conversation with Teddy about car maintenance results in Bob admitting that he’s just not good at being responsible.

Louise, Tina, and Gene are home from school. Tina reminds everyone that the application for her volunteer opportunity at the animal hospital is due tomorrow, and she needs her birth certificate to register. Bob’s got this one! He’s kept all the kids’ birth certificates tucked away in a lockbox, as a responsible father would. Bob heads upstairs to get Tina’s certificate, but… he can’t find the key. Retracing his steps leads him to the car. 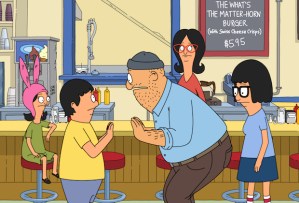 Downstairs, Louise and Gene play an intricately choreographed hand-clapping game. Despite her best attempt, Tina can’t keep up. Linda joins in and says she’ll teach Tina how to play; she loved this game as a kid, and taught her cousin Valerie to do it, even though she only had one arm.

Outside, Bob makes a half-hearted sweep. His back seizes as he tries to contort his body to get a good look at the car floor. He lies across the front seat until the spasm subsides, but chronic middle-aged sleepiness sets in, and he slips into a deep nap.

Bob experiences a surreal Alice in Wonderland kind of moment. He knows he’s dreaming, and in this particular dream, he’s tiny and must team up with Rubberband Squeezy Ball (an old friend that he used to squeeze while driving and coming up with burger ideas) and Tape (a self-help tape he only listened to three minutes of before disregarding to the abyss of his car floor) to help him find the missing lockbox key, and make it out of his car — and his dream — alive. 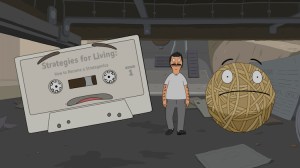 Bob faces an angry triumvirate of car parts he’s neglected to maintain, a rabid pack of ants that infested his backseat, and a monster constructed of Bob’s discarded car junk, and animated by his own ‘shame-tricity’. The lockbox key is nestled in the monster’s chest cavity. With Rubberband and Tape’s help, Bob finds that acknowledging the things he’s good at shrinks the monster. He wakes up just as he defeats the creature and retrieves the key.

While Bob doesn’t actually have the key when he wakes up, he’s learned to accept that that’s OK. He’s good at some stuff and not so good at other things. And as for Tina, after hours of practice, she’s mastered the clapping game and wants to take her newfound talents to the marching band: an extracurricular that doesn’t require a birth certificate. — Jalessa Jones

Now it’s your turn. What did you think of the episode? Grade the premiere via the poll below, then sound off in the comments!