Warning: The following contains spoilers for The Boys Season 2, Episode 6. Proceed at your own risk!

On this Friday’s This Boys, Stormfront shared the truth about her past with Homelander: She was born in 1919 in Berlin, where she hobnobbed with the Nazi elite. Frederick Vought gave her the first successful injection of Compound V, after which she and Frederick fell in love and had a daughter. Frederick wasn’t interested in the celebrity that comes with being a supe today, Stormfront notes. They are in a war for the culture, she argues, and the other races are trying to take what’s theirs. Vought’s true destiny is to create a master race, and Homelander can be the man to lead them. Stormfront then tells him that she loves him and that they don’t have to be alone anymore. A stunned Homelander takes a moment, before kissing her as the Golden Girls theme song starts to play.

Below, showrunner Eric Kripke talks about developing Stormfront’s Nazi past, the importance of telling this story and how Homelander factors into her plan.

TVLINE | In breaking this episode and Stormfront’s origins, what aspects of the comics did you want to bring in, and what did you want to deviate from, and why?
The character Stormfront in the comics is a literal Nazi and comes from early experiments on Compound V. We always wanted our Stormfront to be that character as well. We just wanted to hide it and make the point [that] so much of this modern, alt-right, social media-driven white supremacy really has its roots in Nazism, in fascism, and it’s a direct line. Stormfront represents that for us. It’s just f–king insane to me that it’s a controversial choice to make a Nazi a bad guy these days. When I was a child, there was no argument over whether Nazis should be bad guys, but here we are, 2020! So I wanted to include all that. In terms of what we didn’t include, I think it’s mostly minor details of what happened when. It was nice to tie together the speech that Edgar gives in Episode 1 about Vought, and then learn more about that story through Stormfront so it all can be kind of continued through, and then ultimately [discover] her goal of using superheroes and Compound V to create a new master race.

TVLINE | Did Frederick Vought give her the shot as an adult or as a baby?
In our minds — we’ve written the backstory — she was probably like a 15 or 16-year-old girl at the time. A little on the older side, so it’s lucky she didn’t explode. But not like a full-grown adult. 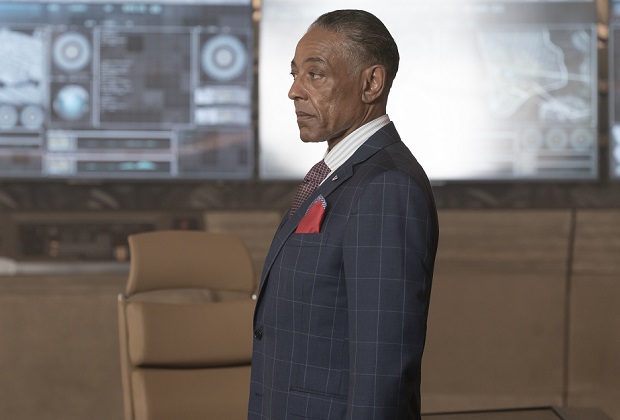 TVLINE | Since she has these ties with Frederick Vought, and Vought has over the years been protecting her, moving her around, giving her new identities, is that why she seems to be getting a pass from Stan Edgar, even though she’s calling out Vought in the media?
That’s actually a really good question for Episode 8, I would say, because I don’t want to spoil when Edgar kind of lays out why he has tolerated Stormfront… If Vought and Stormfront work together, it’s certainly not the first time in history that a corporation has intentionally put a explosive and divisive and destructive figure out in the world in order to help their bottom line.

TVLINE | This storyline has been very timely, but I know you broke this season a while ago. Why did you decide to do this particular storyline with Stormfront for this season? And did you know how timely it was going to be at that point?
No, it’s impossible to predict, although I would say these issues were the same issues happening a year and a half [or] two years ago, when we wrote this. We still had [our current] administration. They were putting kids in cages, they were talking about somehow this caravan that was going to come over the border and kill all of us, and so we had every right to be afraid, and [there was] the travel ban. You’re not allowed to fly in if you’re from a bad country. All the xenophobia was happening. I wanted to really talk about white nationalism and alt-right racism. That was really important to me to talk about. We wrote this season long after the events of Charlottesville, and it’s just so horrific to me to say that there are good people on both sides. It’s literally a f–king nightmare. So I wanted to tell the story and say despite how savvy they may be on social media or charming, there are not good people on both sides. One side are Nazis, and Nazis are bad! 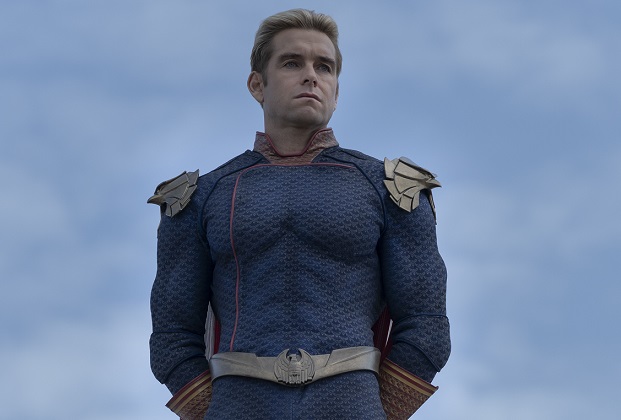 TVLINE | I also wanted to touch on Homelander’s reaction to Stormfront telling him the truth. I spoke to Antony Starr about how Homelander doesn’t seem to really discriminate in his hatred. He said Homelander doesn’t share in her views, and he’s an equal opportunity hater.
I think that’s totally right. I would say that the other thing that Homelander is most of all is ambitious. She had him at, “You can be the ruler of a new master race.” [Laughs] He was like, “Great!” I agree, I don’t think he shares a Nazi dogma, but the idea of leading an entirely new race and having unlimited power is something that Homelander would be interested in, which is why I think he goes along with it. He is not a white supremacist, but I do think he is a supe supremacist.

TVLINE | I was going ask if she just said the right words to him, but my theory was that the words were that he doesn’t have to be alone, because he’s so needy.
Yeah, he’s gonna have her love, he’s gonna have the love of millions. He gets something out of that unholy union.

The Boys fans, grade the episode below, then hit the comments with your thoughts!