Oh yah, you betcha it’s been more than three years since we last zipped up our parkas and ventured off into the snowy world of FX’s Fargo… and series creator Noah Hawley tells TVLine that we almost didn’t make it back there at all.

“On some level, I ended Season 3 feeling like if Fargo, in some big way, is a story about the things that people do for money… I kind of came out of that feeling like, ‘I think maybe I’ve said everything there is to say about that,'” Hawley remembers. But luckily for us, he did have a bit more to say, it turns out: The Emmy-winning crime anthology returns for Season 4 this Sunday, Sept. 27 at 9/8c with what Hawley calls “probably my most ambitious story yet, in terms of scope and scale and character.”

Season 4 is set in 1950 Kansas City, where two rival crime families battle for supremacy: the African Americans, led by the crafty Loy Cannon (Chris Rock), and the Italians, headed up by patriarch Donatello Fadda (Tommaso Ragno), with Jason Schwartzman as Donatello’s son Josto and Ben Whishaw as the oddly named Rabbi Milligan. Rock’s casting may come as a surprise, but it was actually one of the first pieces to fall into place for Season 4. Hawley admits that he “didn’t really have the idea [for the season] for two years. And once I had it, I sort of sprung into action, and I thought, ‘Oh, when I think of this guy, I think of Chris Rock.'” After pitching his concept to FX, Hawley met with Rock, and it just so happened that “he was a Fargo fan, and so he signed on.” 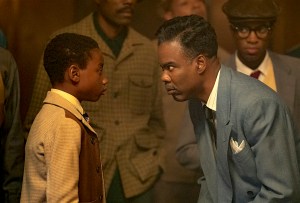 Rock is famous for his legendary stand-up specials and comedic roles, but this is maybe the most dramatic role he’s taken on since the days of New Jack City. (Rock called Loy Cannon “the best part I’ve ever had” in a recent THR interview.) Rock’s rise to fame is what makes him perfect for the role, Hawley says: “When you think about where Chris started and where he ended up, it’s a huge act of will. He’s a self-made entrepreneur, and he’s not only had to create a break for himself, but he’s had to manage it into a career and keep himself relevant and vital. So he’s an artist in the best sense of the word, and a businessman in the best sense of the word, and that felt like this guy to me.”

Season 4’s dueling crime families may be at odds, but they’re also tied together by a quirky twist: To ensure peace between them, the two families have agreed to exchange their youngest sons, with Loy’s son Satchel sent to live with the Italians and Donatello’s son Zero living with the Cannons. The kid swap helps to prevent an ill-considered outbreak of violence, Hawley notes: “There’s only so far that you can go before somebody’s kid gets killed. On some level, it’s a story about parenting as much as it’s a story about America.” And in typical Fargo fashion, Season 4 forces you to reconsider whose side you’re on: “Obviously, we’re rooting for Chris Rock: He’s the underdog, he has so many things to overcome. But at the same time, he’s a criminal, and he did trade his son, as a means to an end. So is he a good guy? Is it black and white like that?”

The season also digs deep into the history of race in America, and what it means to be “white” — which has changed a lot over the years, Hawley points out. “You have these Italians facing off with these African American characters, and none of them are white in 1950. These are not white people. The Irish are not white people. They’re not allowed in stores, either. They’re told not to apply for jobs also. And that changed, but it’s interesting to get to that moment, to go, ‘All right, well, what made them white?’ And why weren’t they, and who was, and who got to decide?” 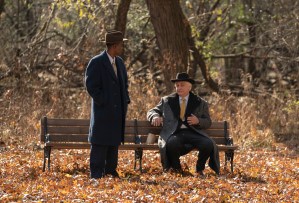 Fargo always draws inspiration from the filmography of Joel and Ethan Coen, and on a superficial level, with its gun-toting gangsters wearing fedoras, it recalls the 1990 crime drama Miller’s Crossing. Hawley points to another Coen brothers movie, though, as a touchstone: “I had a lot of backstory that you had to know in order for the story to make sense. And I thought, ‘Well, when have the Coens dealt with that?’ And the answer is Raising Arizona, right?” So Season 4 kicks off with a Raising Arizona-esque montage, with teen Ethelrida (E’myri Crutchfield) spinning a story in the style of H.I. McDunnough, chronicling the timeline of Kansas City’s criminal underworld in school: “It starts with her history report, and it’s both her history and the history of crime in Kansas City, and at the end of which we realize, ‘Oh, they’re connected in a way we didn’t necessarily expect,’ and now you know everything you need to know to watch this story.”

And though each season of Fargo tells its own distinctive story, characters from other seasons pop up to connect them to the larger Fargo universe… and Season 4 is no exception. Remember Bokeem Woodbine’s Season 2 hitman Mike Milligan? Hawley hints: “It’s no coincidence that Ben Whishaw’s character is named Milligan.”