Warning: The following contains spoilers for Tuesday’s The Haves and the Have Nots. If you’d rather watch first, read later, make like Candace around a good decision and run the other way!

Love, lust and whatever comes in between was in the air in Tuesday’s randypants episode of The Haves and the Have Nots. Not only did Candace cop to her true feelings for Charles, a Machiavellian matchmaker seemed determined to re-set them up. Plus, Jeffrey came thisclose to having company in the shower — and it wasn’t Madison! — a pretty face caught Benny’s eye, and Veronica made her intentions toward Samuel clear. Well, clearer; subtle, she ain’t! Read on, and we’ll go over all the twists of plot in “Counting the Costs.”

‘DO I LOOK LIKE A THERAPIST? DON’T CRY’ | As the hour began, we learned that — dang it! — Vinny hadn’t shot Wyatt. And he was none too pleased with Sandy for being too big a wimp to pull the trigger. “What kinda Malone can’t kill someone?” he asked. Somehow, despite all the talk about rubbing out Wyatt, he lived to irritate us another day, owing to Mama Rose’s desire to charge Katheryn $1M for his return. After sending Sandy upstairs, Vinny, as one will, chitchatted with his hostage and learned that Wyatt — obviously having missed his mother’s wailing over his suicide attempt — didn’t believe the ransom would be paid. Gee, replied Vinny, and “I thought my family was bad.” At the ritzy Chase Regency, Candace begged off going with Benny to meet realtor Rianna, who he thought “sounds so hot,” to have Mitch over for company. “Not like that,” she clarified when he arrived. Turned out, she was still in love with Charles. (Well, duh.) But the president-elect had made his choice, and it hadn’t been her. It would never be her, she assumed. She’d done too many bad things in her life to ever outrun her past. On the plus side, she could now buy millions of dollars’ worth of track shoes.

‘NOBODY IS HAPPY WITH THEIR LIFE’ | Speaking of Charles, when Landon arrived at his place, Conley was there enjoying the free booze. (Senator Westlake, Landon called him, though he’s always “Conley” in the credits. Curious. Is Conley his first name?) Whether because he was already tipsy or just because he has no interest whatsoever in reading any room, he ignored Landon’s discomfort to question him about Candace and repeatedly suggest reaching out to her on Charles’ behalf. Or, ya know, don’t do that, Landon replied. Good meeting! At Veronica’s, the villainess took advantage of Laura’s absence to call Samuel into the house to, ahem, reach a cake plate for her. “Are you happily married?” she asked, then scoffed at his response. “I always laugh when men say [yes] because I know they’re lying.” She also didn’t believe that he’d never cheated. “You are man enough to go around,” she said. When he declined to “take a load off” — her words — she enjoyed the show as he went back to work on the longest pool-cleaning in history. “I will have you drinking, cheating, cussing and in my bed in no time,” she vowed. 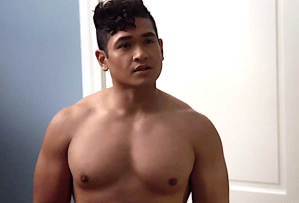 ‘AM I TURNING YOU ON?’ | At Madison’s a buff fella named Colby let himself in, stripped down and almost joined Jeffrey in the shower before realizing that it wasn’t Madison in there. Turned out, Colby was the nurse’s ex, but they still got together now and then for, um, showers. Once the guys kinda understood where they stood, Colby propositioned Jeffrey. Upon being rejected, Colby settled for the two of them going together to meet Madison for lunch and, you know, surprise him. At the hospital, David gave Jim Hanna’s password — “Thank you, Jesus” — so that he could track Wyatt’s car… which he learned almost immediately was at the Iron Bone. “Wyatt would not be that stupid,” he declared as if he’d never met his son. Since David apparently never has anywhere to be or any hobbies at all, he ran to the bar to look for Wyatt… and was quickly escorted out by Sandy’s henchmen. Maybe that’s Sandy’s calling? Middle management?

‘I DON’T KNOW HOW I GOT LIKE THIS’ | At Justin’s, even though the cop looked like he could tear Tanner in two, he let his brother smack him repeatedly. He also let Tanner make his being gay all about him since, “when Dad died, I was the man of the house.” Tanner thought that he’d “fixed” Justin when he’d had a 15-year-old girl rape him when he was just 6. (OMFG.) But it would be OK, Tanner said. He could think of another way to de-gay him now. Sheesh. Poor Justin (words I never thought I’d type!). At the jailhouse, Kendrick — who you never want to deliver information ever, let me just say! — told Katheryn that Wyatt was fine, he was at the hospital. Except that he’d escaped. Oh, and her house had been robbed. Way to bury the lead, dude! After bribing Kendrick to make a call for her, the rich bitch was visited by Chief Shepherd, who said that sure, he’d look into making her more comfortable behind bars… “as soon as you look into that million dollars” you owe Mama Rose. That’s one check, Katheryn insisted, that wasn’t ever going to clear — information that the corrupt cop immediately passed on to the retired queenpin. 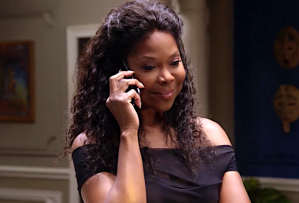 ‘I’M VERONICA, DARLING; I KNOW THESE THINGS’ | At the Iron Bone, Vinny, apparently having tired of listening to Wyatt’s life story, nagged Sandy about starting a family asap. I’m on it, the junior thug insisted. With whom? Vinny asked — the girl who had an abortion? That’d go well. Off that conversation, restraining order be damned, Sandy phoned Rianna, so she was good and teary-eyed when Benny arrived for their meeting. When she left him to look at pictures of houses, he got a call from Veronica, who told him the exact opposite of what Mitch had — Derrick, she purred, was the man who’d raped Hanna. What’s his address, Benny wanted to know. Click. Oh, Veronica giveth, Veronica taketh away! So, what did you think of “Counting the Costs”? How long until Veronica gets Samuel in bed? Are Charles and Candace endgame… or Mitch and Candace? And are Madison, Jeffrey and Colby headed for a threesome?