Dancing With the Stars aired on a different night for its second week of competition, but the result was the same: One unlucky couple got the boot, bidding farewell to the Season 29 ballroom and its phantom crowd noises.

In the meantime, host Tyra Banks pulled off yet another costume change (for reasons I’m not sure I understand), the judges introduced their first “8” of the season (and so soon!), and we learned that when these contestants aren’t performing, they’re doing a lot of texting from the rafters.

Before we get to the season’s first results, here are some quick thoughts on Tuesday’s performances:

Nev Schulman and pro Jenna Johnson (Cha-Cha): For the second week in a row, Nev showed off perhaps the most effortless technical skill of any contestant, easily matching Jenna step for step. But for all his natural dance talent, Nev’s a bit lacking in personality when he hits the ballroom floor, opting for one very big smile even when the performance calls for a little sass or attitude. Judges’ Score: 21/30

Skai Jackson and pro Alan Bersten (Samba): Oof. Poor Skai, y’all. After crushing it with her Premiere Night tango last week, Skai seemed out of sync with Alan very early on in this samba, and the whole thing nearly fell apart when the pair missed a lift completely. But despite those wobbly moments, I was impressed by Skai’s ability to pull herself together and finish the routine strong — no small feat on live television, especially for a young performer. Judges’ Score: 15/30

Johnny Weir and pro Britt Stewart (Tango): A tango set to Lady Gaga’s “Poker Face” seemed like the perfect combination for Johnny this week, but something still isn’t connecting just yet. Perhaps it’s the transition from an ice rink to a ballroom floor, but there’s a choppiness in Johnny’s movements that’s currently holding him back. Judges’ Score: 18/30

Justina Machado and pro Sasha Farber (Foxtrot): Justina is so good at ballroom dancing that I’m already emotionally preparing myself for her premature, unjust elimination in three weeks. Judges’ Score: 21/30 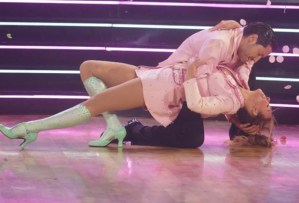 Monica Aldama and pro Val Chmerkovskiy (Jive, pictured): Monica is typically stoic in her work as a cheerleading coach, so it was especially fun to see her act a bit in this routine. But we all know Monica’s capable of mastering tricky steps, and Val didn’t give her nearly enough full-blown jive choreography to really show what she can do. Judges’ Score: 16/30

AJ McLean and pro Cheryl Burke (Foxtrot): AJ’s footwork was smooth, and those knee slides toward the end were a delight. Now, he just needs to work on his face, which has been frozen in a surprised expression for both of his performances thus far. Judges’ Score: 19/30

Anne Heche and pro Keo Motsepe (Foxtrot): I genuinely believe Anne is having the time of her life in the ballroom, and she seems committed to implementing the judges’ critiques. But as much as I hate to say it, I could not remember a single moment of this routine after it was over. Judges’ Score: 18/30

Nelly and pro Daniella Karagach (Cha-Cha): Nelly is hands-down the most pleasant surprise of this season so far; even when his execution isn’t perfect, there’s a charm and swagger there that none of the other contestants possess. I do wish, though, that Daniella would have challenged him more with actual cha-cha content. Nelly seems to have a decent grasp on choreography, and he can do more than the fun filler. Judges’ Score: 18/30

Chrishell Stause and pro Gleb Savchenko (Rumba): Chrishell still seems to have tons of potential, so I hope voters give her a chance to show it after last week’s shaky debut. This rumba was a massive improvement in both footwork and emotion… though I wasn’t expecting so much sultry chemistry from a dance set to The Greatest Showman‘s “This Is Me.” Judges’ Score: 18/30

Charles Oakley and pro Emma Slater (Cha-Cha): Any other contestant visibly counting the “cha-cha-cha”s aloud during their routine might be off-putting… but in Charles’ case, I just found it completely precious. And his performance quality improved week over week, too! Judges’ Score: 15/30

Jesse Metcalfe and pro Sharna Burgess (Foxtrot): The chemistry between Jesse and Sharna is completely magnetic, and I was relieved to see how much elegance he brought to this foxtrot… but that permanently furrowed brow still needs relaxing, especially in a style that’s meant to be light and airy. Judges’ Score: 20/30

Jeannie Mai and pro Brandon Armstrong (Cha-Cha): No contestant pulls better sassy faces during their dances than Jeannie, which is frankly half the battle of these early weeks. But Jeannie’s also learning to rein in her high-energy movements, resulting in footwork that was still a little wobbly, but much less so, this time around. Judges’ Score: 18/30 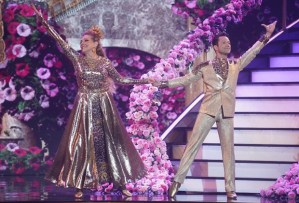 Carole Baskin and pro Pasha Pashkov (Viennese Waltz, pictured): When Tuesday’s episode began, did you expect Carole Baskin to score higher than Skai Jackson? No, you did not! But after a so-so showing with last week’s paso doble, Carole delivered a Viennese waltz that was much more relaxed and confident than her previous routine. The only question is: How many more cat-related songs will Carole be saddled with this season? Judges’ Score: 16/30

Vernon Davis and pro Peta Murgatroyd (Paso Doble): I always appreciate when a male amateur dancer can commit to the paso doble’s intensity without looking cartoonishly angry, which is a balance that Vernon struck nicely during this routine. Unfortunately, even though he mastered the mood of the performance, Vernon’s limbs were rarely where they needed to be, particularly his arms that stuck out at awkward angles throughout the number. Judges’ Score: 18/30

Kaitlyn Bristowe and pro Artem Chigvintsev (Foxtrot): Oh, man, this performance was pretty. (And not just because of the lighting, though Kaitlyn looks fabulous in rose gold.) Many a foxtrot was performed on Tuesday night, but none with the gorgeous extensions that Kaitlyn had — and none with the same drama of Kaitlyn’s potentially injured ankle, which was teased all night long, only for the couple to perform without incident. Judges’ Score: 22/30

OK, your turn! Do you agree with Charles’ elimination? And who delivered your favorite Week 2 performance? Hit the comments!