Despite Julie and the Phantoms being a TV show about rock ‘n’ roll ghosts, the Netflix comedy’s most pleasant surprise is neither musical nor supernatural.

It’s the relationship between drummer Alex (played by Knight Squad‘s Owen Joyner), who is revealed to be openly gay in Episode 2, and fellow ghost Willie (played by Descendants‘ Booboo Stewart).

Without spoiling their entire journey over the show’s nine-episode first season, the pair’s connection is not only respected but celebrated, resulting in the kind of refreshingly positive representation of a same-sex relationship that you don’t often see in programming targeted at a younger audience.

“The way that Alex deals with his issues — including finding acceptance from his chosen family, instead of his given family — is a cool thing for kids to see,” Joyner tells TVLine. “You’ve got your friends, too, and you can lean on them,”

Read on for our full Q&A with Joyner about bringing Alex (back) to life, fanboying over Cheyenne Jackson and developing an on-screen relationship with Stewart:

TVLINE | I have to say, this was one of the most bingeable shows I’ve watched in a minute. This must have been a dream project for you.
Oh, I was excited as soon as I first read the breakdown for the show and the characters. I’d been with Nickelodeon for six years, where I did two shows and one pilot, but I never got to bring that musical side of myself into any of my projects. And I’ve been doing musical theater since I was 10, so singing, playing the drums and acting are the three things I love to do. I also hate to dance, and I figured that I wouldn’t have to dance as the drummer. I was wrong.

TVLINE | Uh-oh, what happened?
I think it was on the first day of rehearsals. Kenny came in and said, “Owen, I’ve got the perfect thing for you — a dance number with Carrie!” I was like, “What do you have in mind?” And he was like, “Oh, something small.” The way Kenny works is that he’ll pitch something to you that he knows you’re nervous about, but he’ll make it seem like nothing. And then you end up doing an entire choreographed dance in front of, like, 70 background and crew members. It was actually a lot of fun. 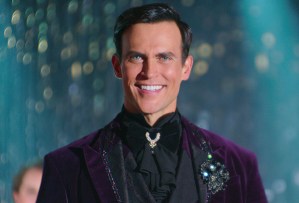 TVLINE | Speaking of the show’s music, has any particular earworm gotten stuck in your head?
They’re all in my head at this point, but I had a few favorite ones on set. I watched Madison do “Wake Up,” which is such a beautiful song, and I hadn’t heard the mastered version yet. And then we had the sun that came up in the background, which was beautiful, and Kenny was tearing up. To see [Madison Reyes] sort of find her place on set was a really cool moment — I was happy to be there for it. I also grew up doing musical theater, so I knew all about Cheyenne Jackson. We had already gotten our parts when Kenny was looking for someone to play Caleb, and when he brought up Cheyenne Jackson, I pooped myself a little bit. I was like, “Oh, yeah, that’d be cool.” So “Other Side of Hollywood” was insane to film, because I just sat there watching Cheyenne Jackson doing his thing.

TVLINE | Well, I’m now a Sunset Curve fan. You guys really do have great chemistry as bandmates.
We had a big six-week rehearsal process before we started shooting. When we started it, we figured that they just want us to learn the songs and instruments, but it actually went way past that. [Kenny] wanted us to bond and become friends, and it worked. I’ve made friends for life.

TVLINE | Let’s talk about Alex. I won’t lie, when I heard there was an openly gay character on this show, I thought, “Cool, he’ll have two lines and no love interests.” I was wrong.
[Laughs] No! You should have faith in Kenny Ortega.

TVLINE | I really should. How does it feel to play an openly character on a show directed at a slightly younger audience? It’s kind of a rarity.
At first, I was very excited because I thought it was a story that the younger generation could benefit greatly from seeing. And the way that Alex deals with his issues — including finding acceptance from his chosen family, instead of his given family — is a cool thing for kids to see. You’ve got your friends, too, and you can lean on them. I just wanted to play Alex honestly and respectfully. I wanted to do something that people would be proud of, and I hope they are. I just trusted Kenny when he said he wanted me to play it, and I gave it my best shot.

TVLINE | And I’m not sure kids can appreciate how much courage it must have taken Alex to come out back in 1995.
Yes! He’s been himself since ’95. And that’s another thing that was so important for Kenny. Alex never really had a big coming-out episode. Kenny and the writers knew that this kid has always been proud to be himself. And I think it’s cool to make it a normal thing within television. His struggles are less about “How am I going to come out?” and more just about acceptance. 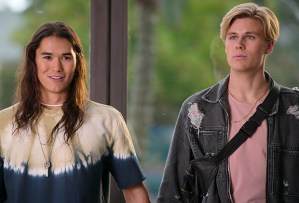 TVLINE | I was excited to see that Alex and Willie ended up as the show’s main couple. How was it building that dynamic with Booboo Stewart?
So cool. He’s the best. He’s the coolest guy ever. He was a guest star, so he wasn’t with us at our seven weeks of rehearsals and training. We had all become best friends by then, and we were going into filming the show with this real relationship. Booboo and I were worried because we had to create a relationship out of nowhere, but he touched down the day before we started filming and was like, “Can I come over and run lines?” So we did that for a couple of hours. He’s just the coolest guy ever, so it was all really natural.

TVLINE | Do you believe Willie really has feelings for Alex, that he wasn’t just getting close to him at Caleb’s behest?
If I were to write it, yes, I think there are feelings there. As an actor, I really hope so, because I had the best time with Booboo. If we get a second season, I know it would be the best time again.

Your thoughts on Alex? His relationship with Willie? His dance number with Dirty Candy? Whatever’s on your mind, drop it in a comment below.