Warning: The following contains spoilers for Tuesday’s The Haves and the Have Nots. If you’d rather watch first, read later, off you go.

In Tuesday’s The Haves and the Have Nots, Veronica set her sights (and paws!) on a muscle-bound new target, Vinny ordered Sandy to take aim at Wyatt, and holy crap! It looked like that dream Veronica had, in which David told her that he was in love with Hanna, wasn’t just a dream but foreshadowing! Read on, and I’ll explain why!

‘WHAT DO YOU THINK THIS IS, A PAWN SHOP?’ | As “The Executor” began, Wyatt, high as a kite, tried to trade Vinny baubles for heroin. He didn’t even recognize the mobster that he’d stabbed. “You must be as stupid as you look,” cracked Vinny. And at that moment, it would’ve been hard to argue with him, especially as Wyatt willingly, eagerly even, followed him to the basement. (Nothing good ever happens in a basement.) Meanwhile, Veronica phoned Laura at 4 in the morning to give her the day’s to-do list. What, had she awakened her housekeeper? “Sorry, not sorry.” After Veronica hung up, Laura reminded Samuel not to flirt with her boss but neglected to give the same instruction to his biceps.

At a more reasonable hour, Jim discovered that he couldn’t have Wyatt’s getaway car tracked because Katheryn had given Amanda’s former vehicle to Hanna, and she had changed the password. When he phoned Hanna, she informed him that “you don’t have anything to say to me” and ordered him to “get off my damn phone, man.” (How cute is it that Hanna says “man” so much when she’s ticked?) After she hung up on him twice, he enlisted David to speak with her. And call the tracking company. And bring him a sandwich. Guess it’s a good thing David has an inordinate amount of free time on his hands. When he left his home, there was Alissa, in one breath issuing apologies for the previous night, in the next, asking for her purse back. Oh, and a ride. That woman never, ever has a ride! 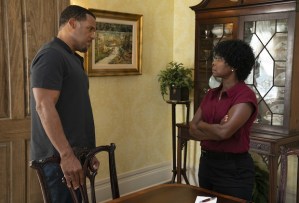 ‘THE WHOLE DAMN PRISON’S GONNA SEE!’ | At the jailhouse, a rookie officer named Kendrick Wilson — a former classmate of Amanda’s — agreed to try to find out anything that he could about Wyatt for Katheryn. Didn’t matter how he was now, inmate Sylvia warned Katheryn, because if she didn’t pay Mama Rose that $1M, he was a dead man. Katheryn wasn’t worried. “There is no one on this planet more ruthless than me,” she insisted. Tough talk for someone cooling her heels behind bars. Elsewhere, after Madison left for work, Jeffrey discovered that Justin had spent the whole night hidden in the hallway. “I was gonna ask you to make love to me,” he said. That was a hard pass from Jeffrey. When he went back inside, Tanner revealed that he’d been there all night, too, to see what his brother had been up to. (How many hiding places does this hallway have, anyway?) Needless to say, Tanner wasn’t pleased by what he’d overheard.

While Candace insisted on checking herself and Benny into a $300/night hotel, David approached Hanna as she was arriving at the Cryer mansion and, greeted as usual with “not a very Christian attitude,” asked why she was so, so hostile. “You’re just a triflin’-ass man,” she replied, “and lowdown like Jim Cryer.” Nonetheless, given Wyatt’s drug problem, Hanna would call the tracking company to get her account separated from Jim’s. Afterwards, David told Hanna that his mother had been a janitor, and he’d been so embarrassed, he’d hidden from her at his own graduation. Why was he telling her this? “I’m trying to compliment you on the standards you tried to set for your children,” he said. “I just wanted you to know that I admire you.” I seriously can’t believe we just watched that scene. Where these two are concerned, that counts as huge progress. On his part, was it… flirting? Either way, I’m fascinated. 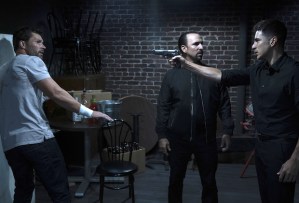 ‘ARE YOU THREATENING ME?’ | At Charles’, the president questioned Conley about his rumored drinking problem and, when the senator suggested he call Candace, cracked, “Now I know you’ve been drinking.” In any case, Charles wanted Conley to stay out of his, er, affairs. At Veronica’s, the lady of the house could barely keep her eyes in her head when she got a gander at Samuel cleaning her pool free of charge. She told Laura that she didn’t want to meet her husband, then sent her maid upstairs so that she could introduce herself and attempt to “comfort” him on the death of their son. Rebuffed, Veronica immediately came up with an errand for Laura to run — in full Veronica drag — so that she could be alone with the hottie. Finally, Vinny woke up a now-sober Wyatt in the basement and ordered Sandy to shoot him. Since Sandy barely had the stomach to pour a shot, much less plug anybody, Vinny took the gun from him and bang! Did it himself… or so we were led to believe. Do you think Vinny really put Wyatt out of our misery? What’s Veronica’s endgame where Laura is concerned? Hit the comments with your theories.