That noise you hear is Dan Conner building an addition to his very crowded house.

TVLine has confirmed exclusively that The Conners has promoted Jay R. Ferguson to a full-fledged series regular ahead of Season 3. Ferguson debuted as Darlene’s new squeeze Ben in the Roseanne offshoot’s first season and went on to appear in the majority of Season 2. 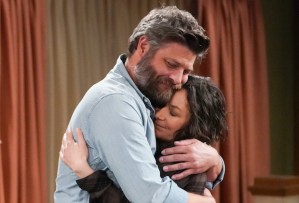 When TVLine broached the subject of Ferguson possibly becoming a full-time cast member in Season 3 to EP Bruce Helford last spring, he said, “It hasn’t really come up come up yet. Jay and Sara [Gilbert] have a long history. They were buddies since they were teenagers. And their chemistry is so freakin’ good. We didn’t know [the Darlene/Ben romance] was going to be long-term. We actually had plans at one point for her to be thinking about somebody else and kind of blowing this relationship up. But as we watched them we [realized] you can’t get much better than the way they act with each other because they’re two alphas going at it. And there’s a genuine affection between them in real-life.”

“We have a lot of regulars,” Helford added. “But certainly I think it’s likely Jay is going to be around for a long time.”

At the end of Season 2, Ben and Darlene abandoned plans to get their own place, opting instead to stay put in the Conner household in order to help a financially strapped Dan. As previously reported, art will imitate real-life in Season 3 — premiering Wednesday, Oct. 21 at 9/8c — as the entire family grapples with the fallout from the coronavirus pandemic.