Adolescence is already an unpleasant tornado of emotions, hormones and confusion about one’s identity. And none of that improves when you add in the unique experience of uprooting your life and moving to a military base in Europe.

Those are the circumstances that teenager Fraser Wilson finds himself in during the premiere of HBO’s We Are Who We Are, an eight-episode series co-created by Call Me by Your Name auteur Luca Guadagnino. Before you tell us what you thought of Monday’s premiere, let’s break down what happened in Episode 1:

If you’re familiar with any of Guadagnino’s films, you know he likes to take his time letting a story unfold; that same pace is on display here (Guadagnino directed all eight We Are Who We Are installments), resulting in a slow burn of a premiere. When we meet 14-year-old Fraser (played by Shazam!’s Jack Dylan Grazer), he’s just relocated from New York City to a U.S. military base in Italy. His mom, Sarah (Big Love’s Chloë Sevigny), is taking over as the garrison’s new commander; her wife, Maggie (Queen of the South’s Alice Braga), is a medic.

We learn a lot about Fraser’s personality right away: He’s irritated when his luggage is lost upon arrival in Italy. When he tells his mom he’s thirsty, he doesn’t want water, but a mini bottle of alcohol in her bag. Later, when Sarah receives a freshly baked cake as a welcome gift at the base, Fraser removes a whole section of the cake with his fingers and eats it. He’s not the most considerate kid, and his relationship with his mother is unusual (like when Sarah cuts her finger while opening a box, and Fraser immediately sucks the blood out for her). 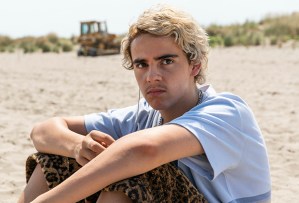 But as Fraser explores the base on his first day there, he seems to become mesmerized by Caitlin (newcomer Jordan Kristine Seamón), a fellow high school freshman who Fraser overhears reading a poem to her class as he wanders the hallways. For much of the premiere, he doesn’t say a word to Caitlin, but he appears to be entranced by her. Britney, a friend of Caitlin’s, notices Fraser’s relentless staring and invites him to the beach with the rest of their group — but Caitlin’s friends think Fraser is a bit odd, and they spend much of that afternoon mocking him until Fraser leaves the beach by himself.

Fraser spends the rest of the day wandering the base aimlessly, getting more intoxicated as the night goes on; he even takes a spill while drunkenly walking along an overpass and scrapes up his face. Fortunately, Maggie arrives to pick Fraser up before he can find more trouble, and she’s patient with him as he vomits from the alcohol and needs help cleaning up his wound. (Maggie even reveals some tension in her marriage to Sarah, sharing that it feels like Sarah is “kissing a mirror,” and not her own wife, when the women are intimate.)

Throughout the hour, Fraser also sends a few voice messages to someone named Mark, who lives back in New York. Most of the messages are Fraser’s mundane, stream-of-conscious thoughts — but when he’s buzzed on wine during his first day at the base, Fraser mumbles to himself, “Mark, I f—kin’ miss you.” And later, during a confrontation with his mom, Fraser says that he hates Sarah, especially when she made him give up his “perfect life” in New York. “You made me leave him,” Fraser tells Sarah, walking away from her.

The next day, Fraser realizes Caitlin is his next-door neighbor when he overhears her getting scolded for wearing her brother’s clothes. Caitlin is dressed in an oversized shirt and baseball cap, and Fraser, intrigued, follows her on his bike all the way to a bar at the edge of the base. Fraser watches and eavesdrops as Caitlin poses as a boy while at the bar, pretending her name is Harper while speaking with a young woman. As Caitlin turns to leave, she makes eye contact with Fraser, but once again, they say nothing to each other. It isn’t until the next day, at the beach, that Fraser finally speaks to the object of his fascination: “So, what should I call you?” he asks.

OK, your turn. What did you think of We Are Who We Are’s first episode? Cast your votes in our polls below, then drop a comment with your full reviews!