Really, was anyone out there crying out for a Nurse Ratched origin story? The trailers for Netflix’s Ratched — premiering this Friday, Sept. 18; I’ve seen the first four episodes — bill the One Flew Over the Cuckoo’s Nest villain as “one of the world’s most iconic characters,” but as played by Oscar winner Louise Fletcher in the original 1975 film, the psych-ward nurse is a rather banal authority figure without much depth or dimension to explore.

Still, Ratched — the latest offering from uber producer Ryan Murphy — insists on conjuring up an origin story for her anyway: a campy, gruesome, punishingly dreary melodrama that feels like a rejected concept for an American Horror Story season… and should’ve remained on the reject pile.

Murphy staple Sarah Paulson plays a young Mildred Ratched — oddly enough, Paulson is older now than Fletcher was when she starred in Cuckoo’s Nest — who talks her way into a job at a California psychiatric hospital in 1947 after a stint as a World War II nurse. Mildred seems polished and ladylike at first glance, but she’s abrupt to the point of being rude… and a manipulative liar, we soon find out. On paper, this is great casting, and Paulson has done terrific work with Murphy before. (Her Marcia Clark in The People v. O.J. Simpson is one of the past decade’s very best TV performances.) But even she can’t do much with this role, which mistakes deviousness for emotional depth and never evolves beyond being a caricature. 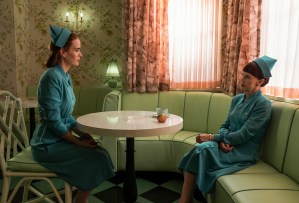 Once inside the hospital walls, Mildred enters a world of unstable inmates and brutally primitive psychiatric treatments — and all with a vacant-eyed serial killer named Edmund Tolleson (AHS veteran Finn Wittrock) chained up in the basement. The hospital setting is highly reminiscent of American Horror Story: Asylum, taking us back to the bad old days of crude lobotomies and heavy tranquilizers. (The doctors believe that lesbianism can be cured by alternating scalding hot baths with ice cold ones, for example.) It’s nice to see Harriet Sansom Harris here as a deluded old opera singer, but the inmates mostly just serve as background fodder; there’s no one with R.P. McMurphy’s spark of rebellion to challenge the nurses’ authority.

Life at the hospital is a miserable slog indeed — and so, too, is watching Ratched. Newcomer Evan Romansky created the series, but it has the unmistakable feel of yet another ride on the Ryan Murphy Merry-Go-Round: Look, a forbidden LGBTQ romance thwarted by cruelty and ignorance! Hey, there’s a bitchy cynic who uses witty one-liners to mask a wounded soul! Oh, a needlessly graphic act of violence purely for shock value! The sights are utterly predictable at this point, and humorless to boot; Ratched doesn’t even have the usual cutting laughs that a Murphy production tends to provide. 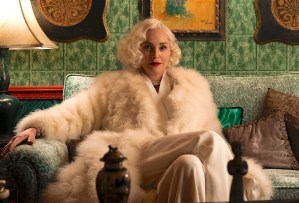 Also par for the Murphy course is Ratched‘s killer cast, which, as usual, has five more quality actors than it even has time to properly showcase, from Judy Davis as the severe Nurse Bucket to Amanda Plummer as the kooky proprietor of a roadside motel. Cynthia Nixon’s talents are completely wasted on a shoehorned-in LGBTQ storyline, complete with an erotically charged oyster-eating demonstration. (“It’s like making love to the ocean.”) There are bright spots here: Wittrock is solid as the deranged Edmund, as is Alice Englert as Nurse Dolly, who takes a carnal liking to the killer. But the overstuffed cast means that few of them ever get a chance to shine. And then Sharon Stone shows up with a monkey on her shoulder and a quadruple-amputee son at her side, ushering in a laughably absurd revenge subplot that includes the dialogue, “I want to give his head to my son as a gift for his 21st birthday.”

The tone ping-pongs between Horror Story-style gore, with hacked-off limbs and people nearly boiled alive, and soppy melodrama with lots of theatrical yelling, blaring orchestral swells and comically hard-boiled dialogue. At times, it feels like Old Hollywood cosplay; as fedora and trenchcoat-clad investigator Charles, Corey Stoll looks like he’s dressed up as a private eye for Halloween. Sure, the production design is typically impeccable, but even that backfires. I promise you’ve never seen a hospital as luxuriously opulent as the one in Ratched, which seemingly has more crystal chandeliers than patients.

Murphy’s productions always tend to favor style over substance — aside from FX’s triumphant Pose, which finds the beating human heart inside its flamboyant characters — but this might be his emptiest effort yet. It answers a question that no one asked, and uses it as an excuse to pull all the usual Ryan Murphy tricks. Between this and the similarly disappointing Hollywood, I’m growing weary of this merry-go-round that keeps going around and around but gets nowhere.