Warning: The following contains spoilers for The Boys Season 2, Episode 4. Proceed at your own risk!

On this Friday’s episode of The Boys, Butcher’s plan to rescue his wife did not go according to plan, to put it mildly.

After Butcher tracked down Becca, the two met up in secret and made love in her car. But by the end of the installment, Becca was doling out some tough love to her husband. Instead of running away with him and her son Ryan, Becca announced that she was staying put, because Butcher would eventually try to find some way to get rid of the young boy. And she was right about his true feelings: “He’s a f–kin’ supe freak!” Butcher exclaimed.

Butcher tried to apologize, but the damage was done. With that, Becca reminded Butcher of the darkness that was in him long before they met and then tearfully walked away from him.

Below, her portrayer Shantel VanSanten breaks down Becca’s difficult decision to let Butcher go and whether she has left herself vulnerable to Homelander by choosing not to leave. 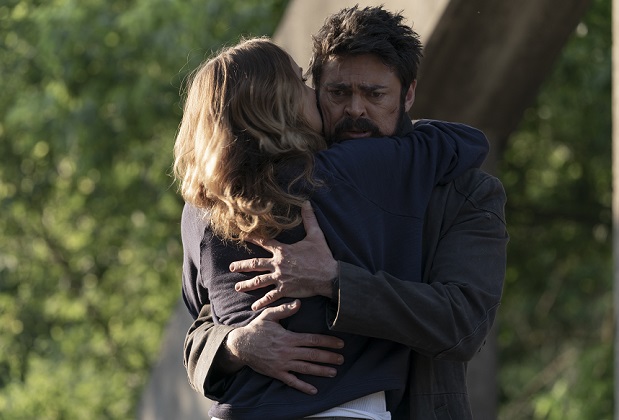 TVLINE | Becca sends Butcher away to basically protect Ryan. Is that a decision that you think she’ll regret?
I always watch my body, what my first reaction is, and it’s funny, I was just confused. I struggled with it because that’s the love of her life. And she loves Ryan, and that’s her child, and she chose to raise the child over telling her husband. It’s so complex. But she tells him in that episode she can’t save him, and she has the opportunity to save Ryan so that he doesn’t end up a bad human or a bad superhero. She feels that responsibility so heavily, and she knows that she can’t save Butcher. Butcher has to save himself. I don’t know if she knows that that means she’ll never see him ever again, but I know that it means that he needs to go and figure it out. That’s a pretty painful realization when you love somebody enough to be able to let them go, and she’s had to do it now twice. There was so much pain in those moments. I remember feeling so frustrated and angry and sad in my Becca brain that I ended up kicking a tire in between scenes, and I was just like, “Ugh, this is the worst!” [Laughs] You feel all of that struggle. I had a wonderful scene partner in Karl [Urban] and just being able to play the conflict of how much they love each other and how much they just can’t make it work.

TVLINE | He does say some pretty hurtful things about Ryan. Does that change the way that she feels about Butcher?
I think I know, driving up, how he feels. It’s pretty tough when somebody actually says the truth to your face, and it comes out. Those are the ugly parts of him that she struggles with the most, but it doesn’t take away the fact that she loves him. There’s a part of her that understands it — but this child, her child, Ryan, is different because of her. She’s the common denominator in changing the whole system and bearing that responsibility, and wanting him to understand that’s what she’s trying to do and love her for that, and doing it a different way than he’s trying to do it. That’s a big responsibility. … There’s that scene in Episode 2, when Homelander says to her, “What’s going to happen when he finds out his whole life is a lie?” That’s everything she fears. Her biggest fear is that he would find out and ultimately reject her and go the opposite way, that she’s not making the right choices, that she didn’t do the right thing, that all of this was for nothing. 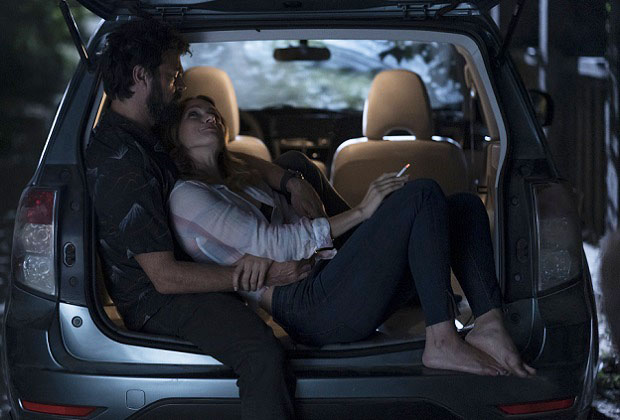 TVLINE | After what Butcher says about Ryan and after Becca sends him away, where does that leave the two of them? Can they ever get past this? Is there a possibility of a future for them?
I don’t think that I can say that Becca sent him away hoping to never see him again. She does it because she thinks that’s what’s best for everybody. But I also think that there’s a part of her that prays and hopes he keeps fighting and finds her again, and they can figure it all out. But in that moment, she just doesn’t know how it would all work, and it doesn’t make sense. Are they going to live their life on the run hiding? What kind of life would that be for Ryan? And what would she have to tell him if they broke out of this bubble that they live in, and here’s the world, and how would that change him? That’s how she keeps him safe, and at the end of the day, that’s her responsibility. And to be honest, if she doesn’t right that wrong, then how does she live with what she had happen to her by Homelander? That’s her way of healing, by changing one tiny part of this huge puzzle, and hopefully, it has this ripple effect for further supes.

TVLINE | In the meantime, she’s back on her own in this weird bubble world that she’s living in, and Homelander’s still very much a threat, coming by all the time. So what are Becca’s options now? How does she fight back against Homelander?
I think that she tries so many different methods. It was so tricky to play, because, in the back of my head, all I could think about was she’s having to live with a man who raped her, and at any point, that is already still a threat. He could always take and do whatever he wants. He has super powers, and she doesn’t. So she has to play on an emotional/mental level. She has to find ways to outsmart or appeal to his emotions, appeal to the parts of him that, if you will, are weak, which is an interesting thing, because we think of the human sides of the supes as being weak when they have feelings. In actuality, what makes humans so strong is our ability to be vulnerable. It’s such an interesting part of the show to explore. But moving forward, she has to try different things, and eventually, when it fails, she has to take matters into her own hands, and that mama bear has to come out, because, again, she’s given up everything in her life for this child and to right the wrongs that happened to her and [not] let the same outcome happen in raising a Homelander Jr., which is even trickier now that he’s around to influence him.

The Boys fans, what did you think of Episode 4? Grade it below, then hit the comments with your thoughts!