Warning: The following contains spoilers for The Boys Season 2, Episode 4. Proceed at your own risk!

On this Friday’s The Boys, Homelander faced his worst enemy: himself. Literally!

In the episode, the supe flew off to a cabin to reunite with… Madelyn Stillwell?! While Elisabeth Shue did return to reprise her role, it was actually Doppelganger who was taking on her form, per Homelander’s instructions. At first, the leader of The Seven sought out Faux Stillwell for milk and whatever you want to call their twisted relationship. But when that no longer seemed to do the trick, Doppelganger morphed into Homelander and started to seduce the real Homelander!

Confronted with himself, Homelander eventually declared, “I don’t need everyone to love me. I don’t need anyone. I. Don’t. Need. You.” Then to really drive home the point (and convince himself?), Homelander killed Doppelganger.

Below, his portrayer Antony Starr breaks down the “bizarre” scene and what it says about Homelander’s needy nature.

TVLINE | What was your reaction when you read the Homelander vs. Homelander scene in the script for the first time?
I got really excited. I thought it was very obviously a strange and really crazy bananas scene. But then I also loved that it was deeply rooted in, really, how screwed up this character in that he’s fabricated this imaginary circumstance for himself to try and find some sort of solid ground, psychologically, and it just all implodes. It’s a fascinating, bizarre and weird scene, and what I love about the show is that when we have these crazy scenes that just seem so insane and nuts, they’re often rooted very deeply in something for the character.

TVLINE | That scene says a lot about the psychology of Homelander.
Yeah, very much so. That whole sequence, the cabin sequence, let’s call it, is really pretty messed up. It’s a pretty bizarre thing to go and do. But it’s a lot of fun as well. I watched that scene, and I was like, “Wow, it’s appalling but hysterical.” 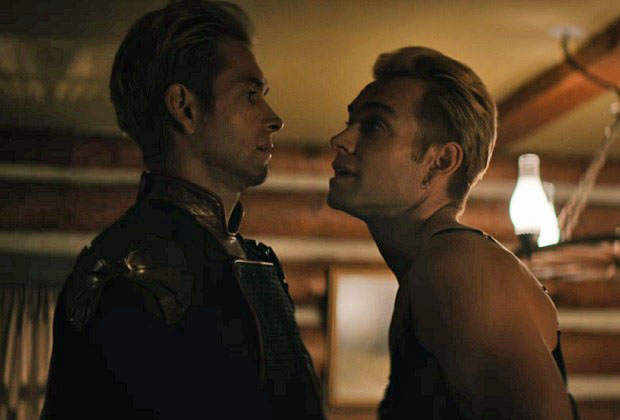 TVLINE | What was it like to film opposite yourself?
It’s pretty weird. I did a show in New Zealand where I played twins for six years, so I’m quite familiar with doing scenes with myself. It’s something I’ve done quite a lot of. So I knew what to expect going in and how much more you have to work. We have another actor that’s there, and you’ve got to guide them and direct them through what you want them to do, so that you can repeat and react to things when it flips around. So it’s really complicated and very, very technical, and thank God I had done it for quite a while prior to The Boys, so it went very smoothly. Actually, it was a hell of a lot of fun.

TVLINE | I’m betting that when you did it previously, the context was quite different.
It couldn’t have been more different. It was a comedy drama in New Zealand called Outrageous Fortune. It was popular years and years and years ago, but it turns out all that twin stuff came in handy.

TVLINE | And you probably weren’t wearing a dress like you were on The Boys.
I was not in women’s lingerie that I can remember, but it was a long time ago, like I said. I’d have to check. [Laughs] But I’m pretty sure it was quite different.

TVLINE | When you were filming the scene, did you ever have a moment where you were like, “What am I doing? This is so odd.”
I’m not going to lie: I have moments like that all the time, whether it’s just about the general job that I do or whether it’s a specific moment, no more so than when we’ve been making this show. This show has some moments where I’m just scratching my head going, “Wow, are we really going to do that? Am I actually reading that correctly?” and then I see it on the screen, and I love it. 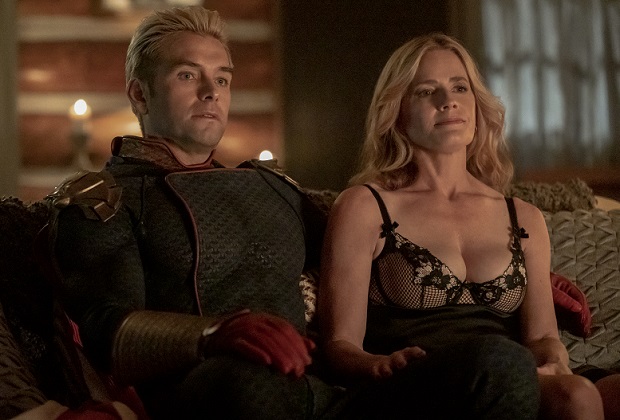 TVLINE | Do you think it’s a crutch that Homelander still needs Stillwell and needs Doppelganger to pretend to be Stillwell for him?
Yeah. Right off the bat, I saw Homelander as the strongest, physically, and absolutely the weakest character on the show, emotionally and psychologically. … [Without Stillwell], there’s no buffer between him and the corporate giant that is [Vought], and also, there’s no one massaging his ego into place and keeping him, in this bizarre Oedipal way, upright and on an even keel, really. When problems come up, it would’ve been dealt with by Madelyn running interference. He just doesn’t know how to cope. The beginning of Season 2, basically, through to the end, he’s really trying to find some sense of equilibrium again. And that’s in large part because he just disintegrated Madelyn Stillwell’s face. [Laughs]

TVLINE | When Doppelganger changes from Stillwell into Homelander, what’s going through our Homelander’s mind when he sees himself, and he’s being so suggestive?
I remember, on the day, just giving so many different options that just go everywhere. We did some where I laughed hysterically, and then some where I bulged my eyes out, and some where I didn’t know how to react, and I think a lot of that was used. But it’s a very surreal moment of clarity for Homelander when he sees himself and how weak he is and how needy he is. At the same time that he’s disgusted and repulsed by that, there’s also an empathy for himself, for the little boy in him. It’s a very bizarre, surreal moment that we tried to layer a lot into it. I’d have to see it again, but I think most of that came through in, really, quite a demented sort of situation.

TVLINE | And the dialogue is so pointed in that moment. He says, “You’re pathetic. I don’t need everyone to love me. I don’t need anyone. I don’t need you.”
Part of this character is he is a little boy. He is a little boy that is going through emotional puberty, maybe, whereby his emotions got cut off very early on in his life, and now he’s reached a point, for whatever reason, where he wants more out of life. Since the beginning of Season 1, he’s been trying to expand and get better and bigger. Maybe he thinks he’s a god and deserves to be elevated to that status in everyone’s eyes. And then the issue is that he just doesn’t know how to cope with some of the things that are coming up and a lot of the effect of the causes he’s created. It’s a bit of a rollercoaster ride for Homelander. The poor old dear has got a lot to learn.

TVLINE | I find it really interesting that he says he doesn’t need anyone, and he shows a lot of disdain for people, but at the same time, as we really see in Episode 5 next week, he’s so desperate for everyone’s approval.
He is, in a sense, the most emotionally vulnerable, neediest, weakest character, one hundred percent, on the show. The eternal dilemma for Homelander is that what he loathes most about himself is his humanity, but that’s also such a strong part of what makes him who he is: that need and that want and that desire to connect with someone or anyone, really. He’s just so isolated. So he’s a whole big bag of contradictions and contrasting ideas. He’s a very, very screwed up dude.

The Boys fans, what did you think of Episode 4? Grade it below, then hit the comments with your thoughts!