The Boys‘ Becca is no damsel in distress. In fact, Butcher’s wife has more than held her own against her sadistic baby daddy Homelander while fending for herself in seclusion. But in Season 2’s fourth episode (premiering this Friday on Amazon Prime), Becca might get an assist from a familiar face.

Below, her portrayer Shantel VanSanten reveals why the prospect of Becca and Butcher’s reunion both excited and terrified her. The actress also talks about going up against the formidable Homelander and raising “what could be the second coming of Christ or another devil on Earth.”

TVLINE | When I saw that you were playing Becca in Season 1, my first thought was, “She must’ve really impressed Eric Kripke in the Timeless pilot.” [Editor’s note: VanSanten guest-starred in the episode as 1930s journalist Kate Drummond.] 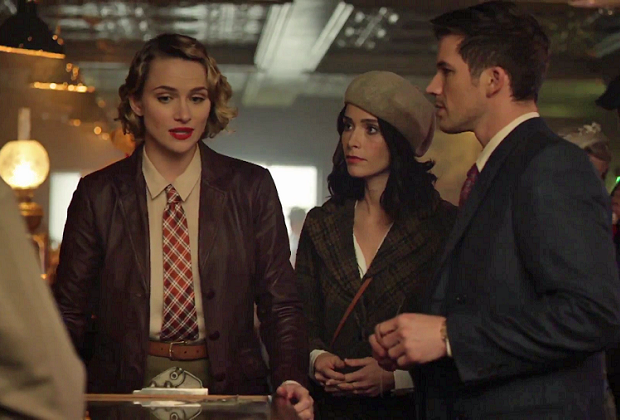 Awww. By the way, I will just say Eric is one of the best bosses. To find somebody in Hollywood who works on projects that are exciting, that you are just dying to work on, and then on top of it, to find somebody who’s so loyal to people that he’s worked with, I feel so grateful for that. I mean, I did audition for the role. But I remember he emailed me, and actually, I found out from him that I got the role before my own manager called me. It felt like, “Oh, you’re coming back to a family and a really exciting one.”

TVLINE | Becca turned out to be a very pivotal character, even though we didn’t see her a lot in Season 1, because the big twist at the end was that she was still alive and raising Homelander’s child. How did you find out about that twist? Did you know all along?
No! It’s actually crazy… I didn’t film until the last few weeks of Season 1, because most of it was all of the flashbacks, which Karl [Urban] had to shave his face for. So they had to wait until the very end. So when I showed up, I had all three episodes to shoot. I knew the storyline a little and how it varied from the comic book. I didn’t know anything about Season 2, and then Eric kind of gave me the rundown over lunch one day. He’s like, “We’ve been talking about you all season, Butcher has, and everybody knows who and what you are, and there’ll be this little introduction, and then, hopefully, we’ll see more of you in Season 2,” and I’m like, “But didn’t I die during childbirth?” He’s like, “Isn’t that a good twist?”

So it was really fun to find out that I would get to continue on and be this giant cliffhanger at the end of the whole season and get to have a little bit of a bigger role where people get to actually see her. Now that she has this beautiful, robust storyline happening in Season 2, I wish we would’ve seen a little bit of Becca and Butcher pre-having to live in the world that she’s in now, which feels like she’s Carol Brady. I like to think she has a little bit more of an edge, where she and Butcher were a lot more alike. 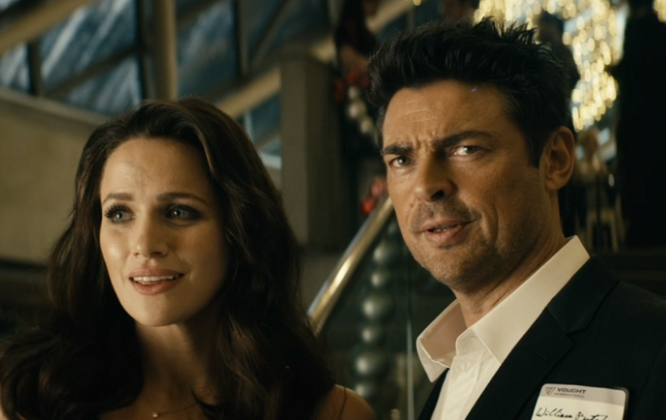 TVLINE | I was definitely curious, watching Episode 4, about what drew her to Butcher and how they met. Have you gotten any insight into the backstory? Or are you just kind of making it up in your head as you go along?
It was never really talked about, and I’m somebody [for whom] the backstory of a character is the foundation. So I have journals beyond journals for each of my characters and memories that I’ve made up, and whether I get little hints from writers or creators or in this case, a comic book. I love their origin story in the comic book, and I took that and owned it.

I think that Becca has her own darkness as well. We just all have different ways of dealing with it. In real life, we’re all living with struggles and pain, but on the exterior, we don’t always show it. We’re not always brooding, wearing all dark clothes. [Laughs] But I do think that her life in the last 10 years, from when everything happened to where we find her, has had to shift, drastically. She’s had to step into the role of being a mother and a mother to a child that wasn’t by choice, and so there’s a lot that she’s wrestling with as well. It’s a mode of survival, and the shifting of the mindset into, “This is my life now.” The sacrifice she made is to step into raising what I like to quote Eric Kripke saying could be the second coming of Christ or another devil on Earth, which would be like a worse Homelander. [Laughs] But it’s up to me, and it’s this giant responsibility to make sure that he turns into the second coming of Christ and not Homelander Junior.

TVLINE | The scenes between Becca and Homelander are so fascinating to watch because Becca is obviously terrified of him, but at the same time, she doesn’t back down from him.
[Laughs] Yes. What’s funny is, in playing it, sometimes I think that I would choose to be even stronger than I should be, and I would have to be reminded that he could tear my face off. [Laughs] I’m like, “No, she’s mama bear! She’s going to fight!” and they’re like, “Yes, but within boundaries, because he is terrifying,” and I’m like, “Eff that! She’s not f–king scared,” and they’re like, “But she would be.” [Laughs] So there are times when you’re standing across from another human being in a costume, and you have to remember that, as much as human to human, we could harm and injure one another, this is a very different level of stakes, because I so badly wanted to bring that strength to it. And I did fight for, in many scenes, to have that strength, because she doesn’t have anything else to live for, except Ryan. This is it. This is what she chose. So if she’s going to go down, she’s going to go down with a fight.

It was like this Sophie’s Choice when she found out she was pregnant [of], “Do I tell Butcher, and I’m going to lose him, because he’s going to go and avenge what happened to me, and he will die? Or do I just quietly slip away, and he gets to move on and live, and I’ll live this painful other life?” Neither way was she ever going to win, but I think she found a place of peace before Homelander found her. But yeah, those scenes were complicated. They’re tough to navigate all of the feelings of knowing that somebody took you against your will and raped you and impregnated you, and you’ve made this choice, and all of those feelings coming back in the midst of him and being scared, but wanting to be protective. There are so many times [where] I’m like, “Am I doing this right? I don’t know what I’m doing.” [Laughs]

TVLINE | Homelander has shown up a lot this season at her house. How’s she navigating that weird family dynamic?
I think there are so many private moments of her screaming into pillows and punching them. I think at the end of the day, her main focus is what’s best for Ryan and always checking in with him and knowing that it’s unfortunate, because she can’t fight against what Homelander wants. So how do you just make the best of a s–t-filled sandwich, to be honest? [Laughs] There were so many moments of having to switch gears and psychologically try to maneuver and get what she wants, which is ultimately just to make sure that she and her son are safe. 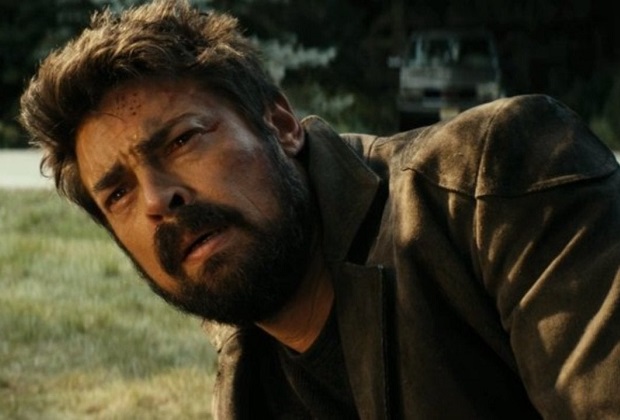 TVLINE | Without giving too much away, what can you preview about Episode 4 and the reunion between Becca and Butcher? How does she feel about seeing him again?
That was a big episode for me and feeling the weight of all those things that were unsaid in the last moment of Season 1 and that cliffhanger. All of the things that you wanted to convey on your face and say and you couldn’t, and there’s a lot. I was so excited to read [the script] as a fan of the show, to finally see them reuniting and what was going to happen and what would be said and not be said. It’s just fantastic, and Karl is such a wonderful actor and scene partner, and being able to talk through those things with him and come up with ideas, we both brought our opinions and collaborated. I feel like what happened was just magical, and we got this tiny little insight and window into what we waited for and were maybe only dreaming of in Season 1, and now we actually get to see them together.

TVLINE | Did you think it was going to happen this early in Season 2?
No. You know what’s funny? I didn’t even know if it was going to happen. There were so many questions in my mind, and I remember when somebody told me that it was going to [happen], I was like, “Tell me more, tell me more!” They’re like, “No, you have to wait to read it.” There’s something that was exciting and terrifying about that, because I lied, and I left. I did it out of love, and I know that, but that doesn’t mean that it was necessarily the right choice, and it doesn’t mean that he’s going to accept me. Who knows how that’s going to play out? They have such an epic love for each other. It’s what’s been driving Butcher and driving him mad, of course, to avenge what he thought was her death, and now this season’s about finding his way back to her. But it’s a lot more complicated, obviously, than just, “OK, we found each other. Now we’re back together.” There’s a whole other human life to consider.