Warning: The following contains spoilers for The Boys Season 2, Episode 2. Proceed at your own risk!

“I don’t want the world to see me, ’cause I don’t think that they’d understand…”

Who knew the Goo Goo Dolls’ “Iris” was an anthem for The Deep’s deep shame over his gills?

In the second episode of The Boys‘ new season, the supe is urged by his new friend Eagle the Archer and his shady “church” to take ‘shrooms to get in touch with his feelings. The Deep brushes off the idea, saying the last time he did that was at a Goo Goo Dolls concert with his conquest-of-the-moment. But take the drugs he does, which leads to a scene of The Deep alone in a bedroom, as “Iris” plays in the background. Then a voice starts talking to the supe, who looks around for the source until he realizes it’s his gills (voiced by Patton Oswalt) speaking to him.

“You can’t accept your own body, so you violate” women’s bodies, the gills say, adding, “You deserve to be loved.”

The gills urge The Deep to take a good look at the body part he’s so ashamed of. As he glides his hand over his gills, The Deep begins to cry, “I’m so sorry. I’m the ugly one… on the inside.” But the gills don’t agree and begin to sing “You Are So Beautiful,” with the emotional supe eventually joining in.

Below, showrunner Eric Kripke talks about the out-there breakthrough and reveals the regal voiceover and iconic ’90s song that didn’t make the final scene.

TVLINE | I did not think you were going to be able to top the dolphin moment from Season 1, but you did with the gills in Episode 2. Where did the idea come from for the scene?
I really love that scene. One of the things we do in this show that is so funny to me is we genuinely start with character. The gills were not the thing we first came up with. It was, “Boy, we really need The Deep to really confront what a piece of s–t he is and why.” He’s sort of part of this new church, and he needs to kind of explore who is… We’ve known for a long time how much he hates himself, and he takes it out on women, and we just wanted to explore that. Honestly, the conversation just started there, and who could he talk to about this? Who knows his history? And then from there, [it] went to, “Oh, he should, like, take drugs and maybe talk to himself” — I never know who pitches what in the room, this big group of brilliant people — and someone said, “His gills should talk to him!” It was so good. [Laughs] And then from there, it was like, “And then they should sing a duet together!” And then, “What’s the song? It should be ‘You Are So Beautiful.'”

But it really originated from a legitimate character perspective of: He needed to really confront himself and confront his ugliness, and what better represents his ugliness than the thing he’s most ashamed of, which is those gills? So there’s substance beneath it, beneath the madness, and that’s one of the things I love about this show.

TVLINE | It’s definitely a breakthrough moment for The Deep. How does that inform his journey this season and how he gets caught up in the church?
I wish The Deep could be somebody who could really express lasting change from a revelation like that, but I don’t think things are looking great for him. He just sort of can’t quite get out of his own way. He’s going to continue to explore his relationship to the Church of the Collective and sign over his bank account to them, and really rely on them to try to get him back into The Seven. 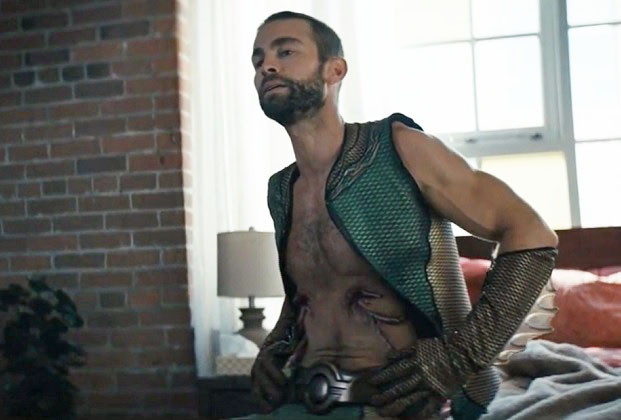 TVLINE | This was not what I thought Patton Oswalt was going to be playing when you mentioned that he was going to be in Season 2. How did that casting come about? Did you always have him in mind?
No, actually. Funny enough, the first name we talked about was Helen Mirren — not that she would ever do it in a million years. But we just thought that would be the funniest thing. But obviously, that wasn’t possible.

We were actually in post [production], we’d already shot it — that was right around when Season 1 premiered — and Patton, who’s an amazing guy, reached out to me, like just on Twitter, to say, “I’m a huge fan of the show.” I was like, “Oh, my God, thank you so much!” and he said, “If you ever have a role for me, let me know,” and I was like, “Funny you should ask, because I actually do have something you could do for Season 2, if you wanted.” For me, the guy who is the lead in Ratatouille and The Secret Life of Pets 2, a beloved animation voice, [as] the voice of Deep’s man-ginas was just too delicious to pass up. [Laughs] He came out to a recording studio in the Valley, and we were there, and we just recorded all the dialogue. He couldn’t be a better, nicer guy.

TVLINE | Was that a song that you had in mind as you were writing the scene, or did it come later?
Funny enough, in the script, it was Dave Matthews’ “Crash Into Me,” but Dave, in his wisdom, would not give us the rights to that song. [Laughs] So we had to pivot to Goo Goo Dolls. But in a way, it’s funnier. I think it worked out for the best.

The Boys fans, what did you think of the trippy scene? Grade the episode below, then hit the comments!