It might be time for The Boys‘ Homelander to start worrying.

Season 2 of the Amazon Prime series kicks off with the supe delivering a faux-sincere speech at Translucent’s funeral, after which Starlight takes the stage to sing an American Idol finale-esque ode to the fallen hero. Homelander later slips into Stillwell’s office, where he finds some breast milk in the mini fridge, and yes, he helps himself to it. Ashley walks in on the awkward moment and thanks Homelander for recommending her for Stillwell’s position. She then introduces him to The Seven’s newest recruit: Blindspot, a blind hero who’s sure to be a hit with the inclusivity-minded younger demo, Ashley enthuses. And if they can find an ethnic, female supe to replace The Deep, they’ll really be golden. Homelander is impressed with Blindspot’s other highly developed senses — until he pops his eardrums and announces that he’ll never let “a cripple” into the group.

In fact, the only reason Homelander recommended Ashley for the gig was so that she would report back everything that happens on the exec floor. She answers to him now, Homelander exclaims, and he’ll decide who’s in The Seven, not her. A terrified/horrified Ashley — she’s no Stillwell — nods and goes along with all of Homelander’s suggestions during a focus group session about whether the term should be “supe-terrorists” or “super villains” (Homelander’s pick). As for their slogan, “Saving the World” vs. “Saving America,” Homelander argues that Americans are the ones who will keep supes in the armed forces, so screw the world. 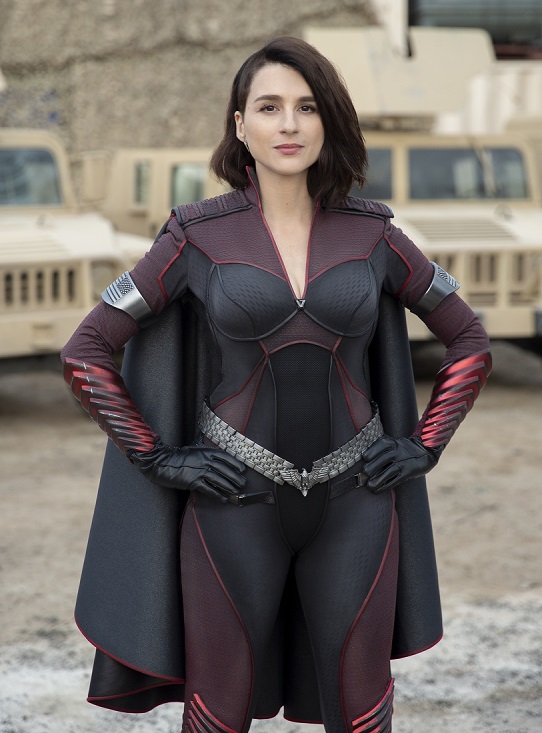 Homelander is enjoying his power trip when new supe Stormfront (You’re the Worst‘s Aya Cash) shows up at a Vought commercial shoot and starts pulling back the curtain on the fake war scene via her social media. Oh, and guess what, Mr. Edgar has appointed her to The Seven! That definitely doesn’t sit well with Homelander, who pays the Vought boss a visit and threatens to bolt after his contract is up. But that doesn’t scare Mr. Edgar because, as he explains, Homelander is under the mistaken impression that he is Vought’s most valuable asset. In actuality, they’re a pharmaceutical company whose prized possession is their confidential formula for Compound V.

Mr. Edgar also gives Homelander an unsanitized history lesson about founder Frederick Vought, who was a pioneer in genetics under Hitler until he joined the allies. His Compound V was responsible for the first celebrity supe, Soldier Boy (to be played by Supernatural‘s Jensen Ackles in Season 3), who killed dozens of Germans, earning Vought a pardon from President Roosevelt. So Mr. Edgar isn’t thrilled that Homelander released V into the world, and he certainly doesn’t think he needs to consult with Homelander on anything. Having been put in his place, a seething Homelander flies off to visit his son. 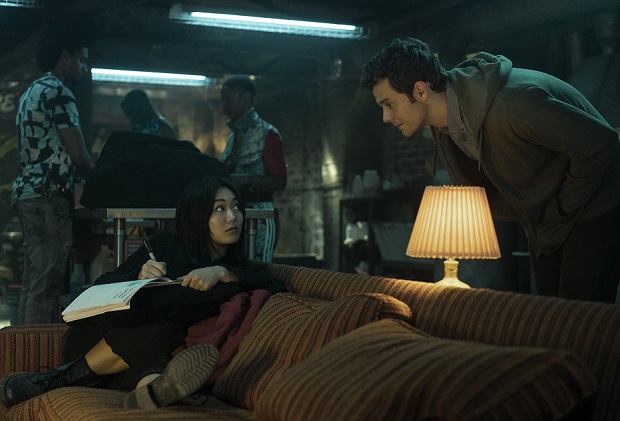 Meanwhile, The Boys are wanted and living underneath a store, while Frenchie works with smugglers and Mother’s Milk stitches up wounds. Kimiko is studying the English alphabet, and Butcher is MIA. As for Hughie, he tells M.M. he’s getting him Purell (timely!) and goes off to secretly meet with Annie. Things are still tense between the exes, but they’re working together to get some V to release to the media. Hughie hands Annie a file, which leads her to Gecko (Gotham‘s David Thompson), an old friend from church and a former teen star who now works for Vought as a guinea pig. She gets footage of him letting a man chop off his body parts — true to his namesake, they regrow — and blackmails him into stealing the V.

Back at Boys HQ, the gang discovers that a supe-terrorist who has the ability to move a ship with his mind has been smuggled into the country. Kimiko finds a piece of origami at the incident and writes out “Boy,” but Frenchie doesn’t understand what she’s trying to say. The Boys reach out to Raynor, who is telling them about how Vought is trying to stage a coup from the inside when suddenly her head explodes. Well, crap. Seeing as how things have gone terribly, terribly wrong, Frenchie calls in reinforcements.

A few other updates from the premiere:

* The Deep gets arrested after having a meltdown at a water park. He’s bailed out by Eagle the Archer (Bless This Mess‘ Langston Kerman), who introduces him to a cult-like teacher (Friends vet Jessica Hecht) and encourages him to open up about his drinking and self-esteem issues. The Deep wants no part of the sketchy “church” — until the teacher says she can help him get back into The Seven.

* Black Noir takes out a supe-terrorist abroad, while Mr. Edgar and Secretary of Defense Robert A. Singer negotiate the conditions of supes in combat.

* A-Train is still in a coma following his heart attack.

* Yes, that was Timeless‘ Claudia Doumit as Congresswoman Neuman, speaking out on TV about how Vought can’t use the fear of supe-terrorists to control people.

What did you think of the Season 2 opener? Grade it below, then hit the comments!