Keef Knight just wants to “keep it light,” OK? He’s a Black cartoonist living in ultra-progressive San Francisco and drawing a popular, inoffensive comic strip called Toast ‘N’ Butter that’s about to hit syndication and make him rich. He doesn’t address race in his comics because it’s never been a big factor in his life, and he doesn’t see any reason to rock the boat. But then he’s roughly tackled and handcuffed by police because they mistake him for a mugger — and suddenly, bottles of malt liquor and pens are talking to him and pushing him to use his artistic skills to pursue a higher calling…

That’s the premise for Woke, Hulu’s sharply observed, slightly surreal new comedy — premiering Wednesday, Sept. 9; I’ve seen the first four episodes — that feels like it could’ve been written this week, with the police shooting of Jacob Blake igniting fresh protests against racial injustice. A number of recent TV shows have used drama to tackle similar territory, from When They See Us‘ stark, searing docudrama to Lovecraft Country‘s wild sci-fi horror. But Woke prefers to use a clever, cutting sense of humor to address these weighty issues, and it works, thanks to star Lamorne Morris’ terrific lead performance. He has an easygoing, laid-back appeal, and so does this show. 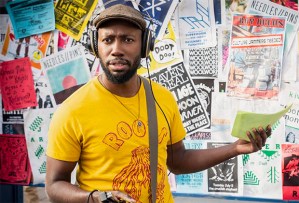 So yes, Morris’ character Keef starts hearing strange voices (provided by the likes of J.B. Smoove and Nicole Byer) coming from malt liquor bottles and garbage cans, imploring him to embrace his identity as a Black man and use it in his art. (They give him advice, too: “Did you know malt liquor makes Black people impervious to bullets?”) It’s almost like he has a new superpower that he’s not sure how to use yet — and that he never asked for in the first place — but Morris, best known as New Girl‘s cat-loving loftmate Winston, keeps it grounded in reality. He’s excellent here as Keef, radiating a low-key charm while also wrestling with the considerable weight of Keef’s newfound mission and adding in superb physical comedy as Keef argues back and forth with voices only he can hear. (He rarely wins, by the way.)

Woke has its goofy side, to be sure, but it’s thoughtful as well, handling thorny subject matter with a light, comical touch. It doesn’t minimize the very real issues Keef faces, but it vividly illustrates them with highly specific observations: Keef and his friend being afraid to turn in a white girl’s lost wallet because then they’ll be accused of stealing it; Keef’s syndication team lightening up his author photo to broaden his appeal; the “cultural plunder” of shows like Antiques Roadshow; the lessons to be learned from John Legend’s career path. The jokes are hilariously on target, especially when taking aim at San Francisco’s well-meaning but clueless white population, who treat Keef as a fun curiosity but can’t seem to fully understand his concerns because they “don’t see color.” 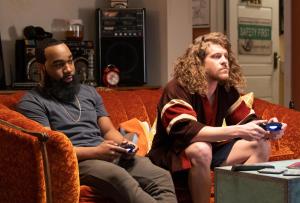 Morris is bolstered by a pair of solid performances as Keef’s roommates: Gunther (Blake Anderson, from Workaholics), a frizzy-haired white boy who’s oblivious to his privilege (he has the genius idea to sell cocaine as a powdered “energy supplement” and can yell at cops with impunity); and Clovis (stand-up comic T. Murph), a hustler who pretends he’s a famous athlete to get women and resells special-edition sneakers at a huge markup. (Clovis also warns Keef about the financial pitfalls of being too politically aware, reminding him that “woke” rhymes with “broke.”) The female characters aren’t as strong — Keef’s girlfriend is particularly thinly drawn — but SNL alum Sasheer Zamata shows promise as alt-weekly journalist Ayana, who spurs Keef to look inward.

I’m not totally sure where Woke is going in the long term — it does seem to be gradually moving away from the talking garbage cans into less surreal territory — but I like where it is right now. It doesn’t claim to have all the answers when it comes to healing the racial divide, but it’s refreshing to see a show approach it with a sense of humor that illuminates without getting preachy. Dismantling centuries of systemic racism is hard work, after all, and we could use a few laughs along the way.