Contrary to what Transplant‘s title may lead you to believe, Tuesday’s Stateside premiere of the Canadian drama is not about a medical transplant team — and that’s a good thing. Instead, the premise of the series — imported by NBC to fill its coronavirus-impacted fall schedule — is about something far more interesting: Bashir Hamed (Jett‘s Hamza Haq) is a Syrian doctor who has come to Canada to escape the civil war in his homeland.

Like many immigrants, Bashir finds himself working in a restaurant instead of the profession he was trained in. Then one night, a truck crashes into the food establishment. Although Bashir sustains terrible wounds, he starts tending to the other employees and customers, restarting a woman’s heart with just the pounding of his fist and drilling a hole into the head of Dr. Jed Bishop (Agents of S.H.I.E.L.D.‘s John Hannah), who happens to be the head of an emergency department.

At the hospital, the staff marvels at how Bishop could have saved everyone and then drilled into his own head. Meanwhile, Bashir won’t stay put despite the orders of Dr. Magalie “Mags” LeBlanc (Being Erica‘s Laurence Leboeuf) and ends up saving a choking boy. But no good deed goes unpunished: One of the police officers starts to suspect that Bashir was the driver of the truck. When Dr. LeBlanc steps away to tend to another victim, Bashir flees the hospital and begins to frantically search for his little sister Amira (Orphan Black‘s Sirena Gulamgaus), who isn’t at her night school class. Bashir’s landlord informs him that they saw the accident on TV, and Bashir realizes that Amira is at the hospital, looking for him, so he rushes back there, despite the threat.

He’s spotted by Dr. LeBlanc, who’s put two and two together, and asks Bashir how he saved her boss and what else he noticed about her heart patient. He tells her that the woman was tired and her hair was falling out, which leads Dr. LeBlanc to diagnosis her with a postpartum heart condition, saving her from an unnecessary heart transplant. 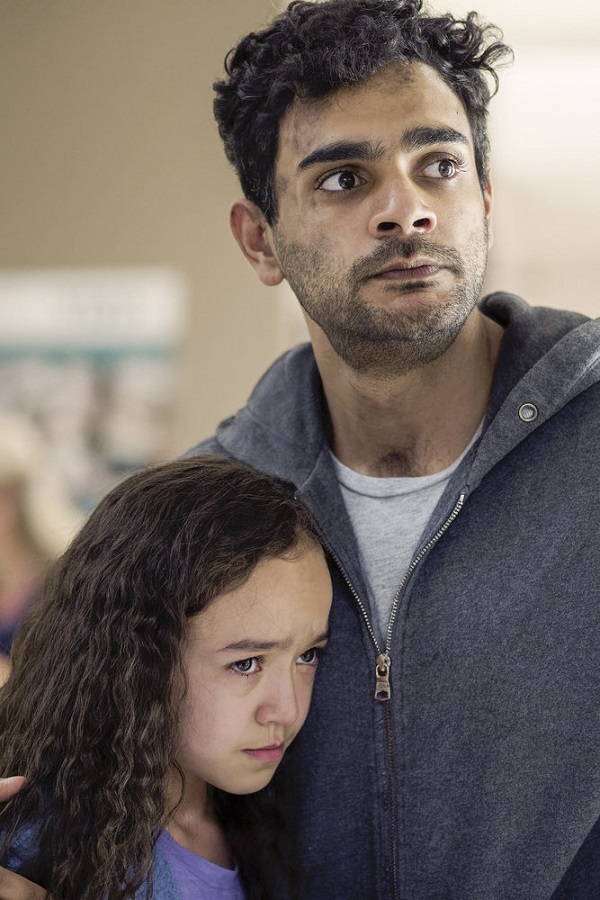 Once tearfully reunited with his sister, Bashir gives an emotional Amira a cell phone as a present for her 12th birthday. The heartwarming moment is interrupted by the cop, who cuffs Bashir to a hospital bed. After the driver is ID’ed and the crash is revealed to be an accident, the cop nonchalantly lets Bashir go — but there’s one more doctor who wants to see him: Bishop. He remembers interviewing Bashir for a job that he didn’t give him. Now it’s time for a re-do.

What did you think of Transplant? Grade it below, then hit the comments to back up your pick!