Long before the Tom Ellis was named TVLine’s Performer of the Week, Lucifer‘s showrunners were hailing their star’s devilishly good double duty in Season 5.

As revealed very early in the first half of Season 5 — as well as played up in the trailer which was released back in mid-July — Lucifer’s brother Michael slipped away from the Silver City whilst his twin was busy lording over Hell, to at first to “break,” but ultimately decide to take over, his Earthly life. To those ends, Michael did an OK enough job passing as Lucifer, trading his smarmy voice for his twin’s clipped British accent and doing his very best as a solver of crimes. 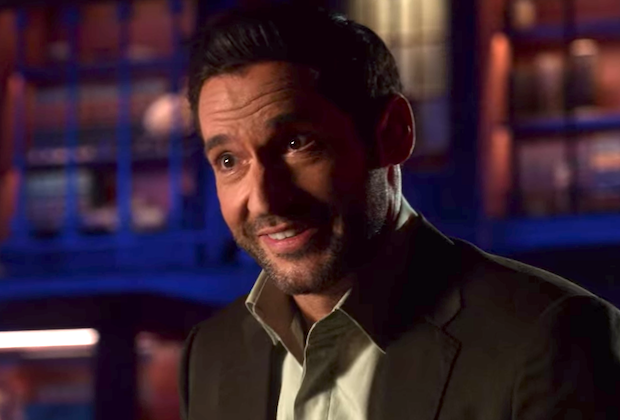 But as viewers were made privy during Michael’s first scene by himself, and then with Maze, he’s a very different, far less polished celestial.

To bring Michael to life, “Tom [Ellis] sat with us, over several phone calls, really asking about who Michael was,” co-showrunner Ildy Modrovich told TVLine. “We wanted him to be quite opposite of Lucifer, but why? What made him that way? We started there, with his personality, and the physical traits and physical manifestation came organically after that.”

Specifically regarding the physical, Modrovich said the questions were, “Somebody who’s like that, how would they stand, how would they talk, what would they wear? It was very organic, and Tom was a big part of it.”

Speaking of how Michael stands, it is clear from go that he has a hitch in his right shoulder, which he needs to straighten out when posing as Luci. And if you were curious, as I was, what that apparent injury is all about, “We find out why he has it in [Season] 5B,” Modrovich shared. “We explore it pretty in depth.” 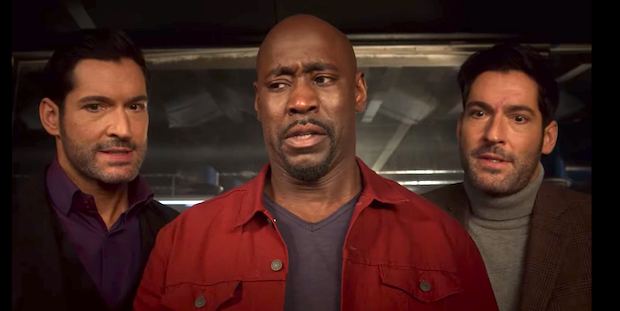 Turning to the finer, more subtle aspects of Ellis’ performance, Henderson said, “What I love about it is Tom is so seemingly effortless as Lucifer, when it’s actually a lot of work. With Michael, you can see how much craft he puts into it, but it’s the exact same amount that he puts into Lucifer; we’re just so used to it.” And because longtime viewers may take that for granted, “I’m excited for people to be reminded of just how hard it is, what he does, and how easy he makes it look,” said Henderson.

“People think he is that character, that he is being himself, like Jimmy Stewart or something, but he’s actually not like Lucifer. When you see him behind the scenes you realize he’s not that guy,” Modrovich affirmed. “There is obviously a lot of Tom Ellis in parts of Lucifer, which is what makes him so endearing, but Tom is just a good actor!”