Surreal and stylish, harrowing and stunningly sweet, Monday’s finale of I May Destroy You was probably one of the best episodes of television since The Leftovers’ “International Assassin.” Read on, and we’ll go over everything that happened — or might have happened — after Arabella locked eyes with her rapist in the HBO dramedy’s penultimate episode. 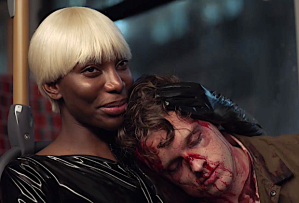 ‘STOP TREMBLING, YOU LOOK LIKE A CRACKHEAD’ | Picking up where “Would You Like to Know the Sex?” left off, Arabella spotted her attacker, David, across the bar looking like he hadn’t a care in the world. In the blink of an eye, she pulled Terry into the loo and revealed her plan to drug him and give him a taste of his own medicine. “F–k, it’s a lot,” said Terry. “It’s been a lot, though, hasn’t it?” Bella replied. That, it had been. So they disguised themselves and returned to the club, using Terry as a decoy with David’s friend, Michael, so that Arabella could introduce herself to her attacker — sorry, “Patrick,” is it? — while Theodora swiped from the predator’s pocket the leftovers of the sedative with which he’d dosed his would-be victim’s drink. Playing drugged (since, obviously, she didn’t drink the cocktail), Arabella allowed David to lead her to the bathroom and remove her panties before revealing that not only was she conscious, but she knew that a criminal always returned to the scene of the crime. In other words, busted, bastard. Under the stall, Theo managed to stab David with a syringe full of his own date-rape drug, after which the women allowed him to leave. But, um, what if Theo had given him too much of the drug? “He could die for all I care,” said Terry. Except for the fact that he had Bella’s undies — evidence. So the trio followed David. And followed him. And followed him. Finally, the drug took its toll, and he collapsed in the street. At that point, Arabella retrieved her skivvies. But she wasn’t ready to leave him just yet.

“I wanna see his penis,” Bella declared. “He saw my thing, I wanna see his.” Suddenly, she was touching both of their, er, things. “Oh,” Theo blurted out, “that’s kinda hot.” (Um, no.) Just then, David awakened, so Theo choked him with Arabella’s panties while his victim punched and kicked the s–t out of him. To the point that it appeared that he’d expired. No prob: Arabella knew where to hide him. She bused him back to her place and hid him under her bed with all of the other bad things. Afterwards, she added a last bloody Post-It to her story board on the wall. Not that it was really her last, because from there, we flashed back to Arabella talking to Ben, a loud bird chirping away in the background, before she returned to Ego Death to replay the same scenario, albeit very differently. This time, it was Terry, not Arabella, who had the plan to “deal with” David. Terry so regretted telling Simon that it was OK to leave her best friend alone and wasted, she was eager to redeem herself. 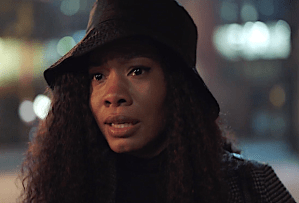 ‘I’M DERANGED, TERRY; I THOUGHT YOU KNEW THAT’ | Terry’s plan, it turned out, involved Bella snorting a lot of coke to ward off the effects of the date-rape drug that they knew David would slip her. She then played doped (by the hardest), allowing him to lead her to the bathroom and get in position to… well, you know. “Hey, David,” she said at that point. He was confused. She’d known he was going to spike her drink, yet she’d gone along with it? There are homeless people out there, he railed. And she was going to make a big deal about a guy drugging her? In his estimation, she was nothing more than a “f–king silly little princess,” a “f–king self-entitled whore.” Yep, that was all he was, he said, lost in memories of his own abuse. “You’re just a dumb little whore, David.” (Pretty stellar work there by Lewis Reeves.) From there, we went back to Bella’s bedroom, where David was flummoxed by her willingness to let him sit on her bed. “It’s not right,” he said. “If you’re not scared, I don’t know how I’m meant to be. It’s not right, this, is it?” No, David, none of it was. And soon, the police arrived to take him away — thanks, Terry — and once again, Arabella added a last chapter to her wall.

From there, we cut back once again to Arabella and Ben and the extra-loud bird. This time at Ego Death, Terry realized that she’d been tricked into that threesome overseas. She might even join Theo’s support group as a result. After the pals’ meeting in the ladies’ room, Arabella approached David — sorry, “Patrick” again — bought him a drink and whispered something in his ear that prompted him to follow her to the john for a make-out session. In this scenario, Michael bumped and ground for Terry, not the other way around, and Arabella and David had sex — all kinds of consensual sex — back at her place. In the morning, he told her that “I’m not gonna go unless you tell me to.” Her response: “Go.” It was so freaking peaceful. Sweet. Then, he went to the bathroom, a bloody and battered David crawled out from under the bed after him. Trippy. Brilliant.

‘THANKS FOR COMING, BY THE WAY’ | Next, we cut back to Ben, Arabella and the bird again. (That bird must have gotten Special Guest Star billing like Heather Locklear or something.) Arabella didn’t need to do the bar-watch thing again, she told her roommate. So they were just gonna hang that evening. Some time later — based on how much Ben’s plants had grown — Bella gave Terry a copy of her new book, January 22, reducing her to tears with its dedication to her. (Hilariously, Terry had been afraid that Bella would dedicate it to Biagio — as if!) Later, the BFFs gathered together with Kwamé and Terry’s new boyfriends, as well as Theo, to watch the premiere of the actress’ commercial. And as the season came to an end, Bella gave a reading from the book that we so often had been sure she’d never finish writing. Aaand exhale. What did you think of “Ego Death”? Grade the finale in the poll below, then hit the comments with your reactions to this wild and amazing half-hour of television.