The following contains allllll of the spoilers from the first half of Lucifer Season 5, which released Aug. 21 on Netflix.

As Season “5A” of Lucifer came to a close with Episode 8, titled “Spoiler Alert,” a celestial family feud necessitated the most divine of intervention — by Dad.

For just as Lucifer and Chloe seemed poised to take yet another step forward in their relationship — he was (possibly) on the verge of professing his love, in the wake of them (finally) consummating things — time came to a standstill inside of the LAPD precinct. Looking around around and finding Amenadiel (who was with a “frozen” Linda and Charlie), Lucifer was led, by Michael, to surmise that their brother’s anxiety over his baby being a mere mortal triggered a complete slowdown in time.

As harsh words were exchanged (did Michael make li’l Charlie sick, to prove a point?) and with the arrival of Maze (still livid that Luci kept secret her mother Lilith’s existence), a tectonic two-on-two throwdown commenced. After Maze got KO’d and Lucifer and Amenadiel teamed up/winged up against Michael, the voice of all voices boomed, bringing the brawl to a halt.

“That’s enough!” said God, appearing on the staircase landing, bathed in light (and played by 24‘s Dennis Haysbert in a very cozy looking sweater). Having gained the boys’ attention, He said with a twinkle in His eyes, “Children, you know I hate it when you fight.”

Coming out of said midseason finale, TVLine checked in with co-showrunners Ildy Modrovich and Joe Henderson.

TVLINE | Tell me about God….
ILDY MODROVICH | I’ll say this, we were nervous about bringing in God. From the very beginning, in Season 1, we said we’d never go to Hell and we said we’d never have God. And it’s mostly because He’s been this man of mystery right? [Lucifer] has always been about characters interpreting what His intents are as opposed to actually having the guy there able to speak right to you, but I think we managed to have Him walk a fine line, and at the same time we get to know who He is.

TVLINE | Is there a reason why Lucifer has not yet told Chloe he loves her? I was thinking that maybe he was about to explain to her that the Devil is unable to express love.
JOE | That is a big part of Season 5B.
ILDY | I would like to quote RuPaul, who says at the end of every RuPaul’s Drag Race, “If you can’t love yourself, how the hell are you going to love somebody else?” 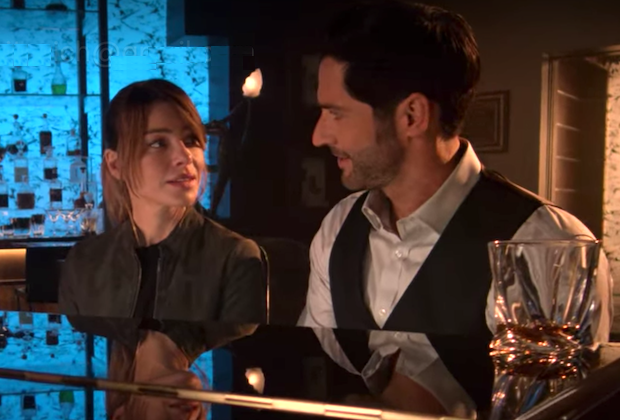 TVLINE | Those were some really lovely scenes at the end of Episode 5, where Amenadiel explains what Chloe’s true “gift” to Lucifer is, and how she doesn’t make Lucifer vulnerable but makes him want to be vulnerable around her.
JOE | We wanted to figure out how to make the story worthy of that idea, because to me that is such a relatable, simple, human thing, so we both wanted to tee it up, explore it and get there. So thank you, because that was really really important tu us.
ILDY | I think a guiding star for us in the series is to basically hold all of our characters accountable. We sort of designed Hell so that it’s our own guilt that puts us there, it’s always up to us, the choice is ours, and I think this is just another way to explore that theme. It’s Lucifer that makes him act the way that he acts. Nobody makes us behave a certain way. We choose our behavior.

TVLINE | Talk about the decision to make Charlie mortal. It seems like it’d be more fun to have a half-angel baby literally flying around!
JOE | We wanted to explore the relationship between Linda and Amenadiel, and Charlie is the focus point for that. Also, they’re in a biracial relationship, with a biracial child, but also it’s part-human/part-celestial, and we wanted to explore the expectations of parenthood on our children. There’s that idea that you want them to both take after you but to also be their own people, so how hard it is for parents to find out when a child chooses another path or heads in that direction? That can both be difficult but strengthen a connection. The shorter answer is: We always try to choose the story that’s harder on our characters, because we are cruel and evil writers. [Laughs] 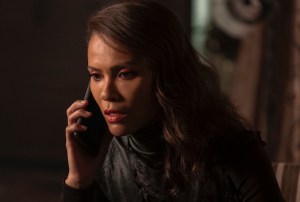 TVLINE | Maze has been quite angry with Lucifer this season. How worried should we be about that friendship?
JOE | Maze had this jagged wound at the end of Season 4, Maze and Chloe really, and that is why they’re paired at the top of Season 5. But Maze is heartbroken. And as much as she is mad at Lucifer and the world, she’s really just mad because she feels rejected, and that’s much of her journey this season that we’re exploring.