Freeform’s four-part limited series Love in the Time of Corona kicked off on Saturday night with a scene that might cause some traumatic flashbacks: It’s a few weeks into the pandemic, and Sade (The Affair‘s Nicolette Robinson) is preparing her husband James (Smash‘s Leslie Odom Jr.) to go for a grocery run. He’s covered in head-to-toe protective gear, while she reminds him to avoid crowded aisles, stay six feet away from other people, wipe his credit cards, not touch his face, etc. And off to get food he goes! It’s a moment that, unfortunately, is likely not unfamiliar to most viewers.

After Sade and James get over the fact that he forgot several items on the back of her grocery list, the couple starts discussing the possibility of having a second child. Having done most of the heavy lifting with their first kid while movie producer James was on the road for work, Sade is initially against the idea. She wants to focus on her career for a change. But now that he’s home, James thinks the timing might be right. Then Sade reconsiders the idea. After all, if the quarantine lasts for a year, then it won’t be time wasted, sitting at home doing nothing.

Elsewhere, best friends/roommates Oscar (13 Reasons Why’s Tommy Dorfman) and Elle (Mad Men‘s Rainey Qualley) are lusting after Hot Shower Guy, aka Adam (The Society‘s Emilio Garcia-Sanchez), their neighbor who washes off outside. The pals decide to pick online dates for each other, during which Elle — who’s in love with Oscar — discovers that her gay bestie is seeking men and women. Elle’s selection for Oscar is a charming fella (Orphan Black‘s Jordan Gavaris), while she is stuck with a guy who won’t stop talking about the DC cinematic universe and then asks to see her boobs. 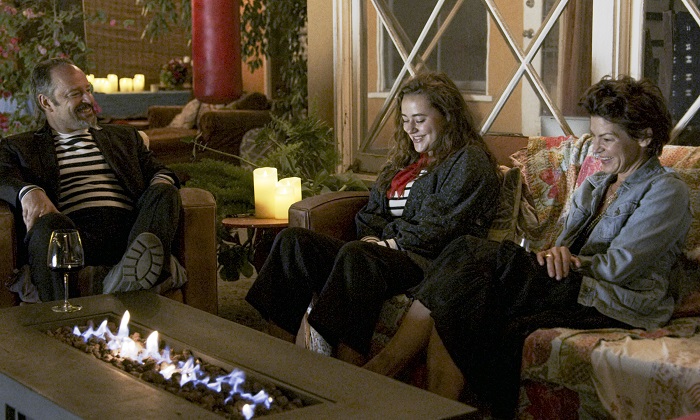 Then there’s Paul (Ally McBeal‘s Gil Bellows) and his wife Sarah (The Bold Type‘s Rya Kihlstedt), who are separated but pretending to still live together now that their “quaran-teen” Sophie (Ava Bellows) is home from college. Sophie’s a bit over-dramatic — she has a meltdown when her boyfriend breaks up with her via text just before he was supposed to come quarantine with them — so Paul and Sarah aren’t sure their daughter can handle the truth. The jig almost falls apart when a heartbroken Sophie asks to sleep with her parents, forcing Paul and Sarah to share a bed.

L. Scott Caldwell (All Rise, Lost) rounds out the ensemble as James’ mother Nanda, whose husband is in lockdown at a rehab facility and is starting to experience forgetfulness. The pair is about to celebrate their 50th anniversary, and Nanda still thinks the quarantine will be over in time for their big party in May. Sigh. Poor Nanda. At least she’ll have company at home: Her other son asks to stay in her guest house after he gets laid off.

What did you think of the first episode of Love in the Time of Corona? (A second installment followed at 8:30/7:30c.) Grade it below, then hit the comments!