After going nearly an entire month without airing a new episode of RuPaul’s Drag Race, VH1 quenched fans’ collective thirst on Friday with the premiere of the franchise’s latest offshoot — and there was plenty to drink in.

I expected much of the drama to feel completely contrived — and like all reality shows, some of it definitely was — but it was frankly refreshing to get better acquainted with some of these queens outside of the werkroom. For example, I could watch an entire spinoff just about Vanjie and Silky Nutmeg Ganache (they’re neighbors?!), or Derrick and his functioning throuple. (Can we start a GoFundMe to buy them a slightly bigger bed? I got claustrophobic just watching all three of ’em squeeze into that thing.) 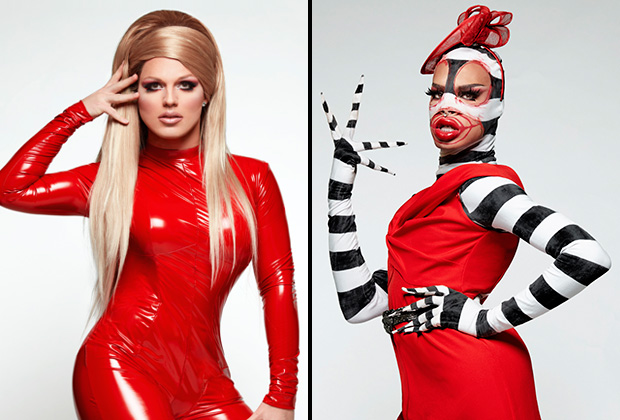 We also got an update on Yvie’s battle with Ehlers–Danlos syndrome, a condition that prevents her from producing or retaining a lot of collagen. As a result, her joints are in a state of rapid deterioration, which means being a stunt queen is probably one of the worst things she can do for her overall health. It’s a story we first learned when Yvie won Drag Race Season 11, but it’s one worth following. Hearing her speak with Ru about avoiding seeing a doctor was heartbreaking.

Most of the premiere’s drama came from Naomi’s lingering feud with fellow Season 8 queen Derrick, both of whom took every opportunity to add more fuel to the fire. Naomi began by mocking Derrick — albeit behind her back — for using her Britney Spears aesthetic to avoid actually having to develop a unique persona of her own. Even when Yvie casually complimented Derrick’s work ethic and willingness to try anything, Naomi couldn’t resist adding, “It’s so hokey.”

Their tension reached a boil during a get-together at Derrick’s house, when one third of her throuple — Nick San Pedro, better known as Alaska’s drag daughter Nebraska — read each other to filth. Derrick started by calling out Naomi for saying you’d have to be “braindead” to be a Derrick fan, then Nebraska followed by making fun of Naomi’s performance in the Snatch Game. (Kind of weird to bring up a random challenge from six years ago, but OK.) Naomi then shut it down by informing Nebraska that being 6′ 5″ doesn’t make her fierce.

The premiere ended with Nebraska crashing another of the queens’ post-rehearsal outings, so we’ll have to wait and see how things play out between her and Naomi. (I’m thinking… not great.)

Hit PLAY on the trailer below for a taste of what else you can expect this season. Then, grade the premiere in our polls and drop a comment with your review.